Moody's Investors Served dropped Bed Bath & Beyond from Baa3 to Ba2, but here's what investors need to consider.

Moody's downgraded the retailer two levels from Baa3 to Ba2, with a stable outlook, which completes the review of Bed Bath & Beyond that began Oct. 28, 2019. "The two notch downgrade reflects the acceleration of declines in same store sales and further erosion of EBITDA that will cause debt/EBITDA and EBIT/interest metrics to fall below previous estimates," stated Moody's analyst Peggy Holloway, in a press release.

"The transformation will likely take another two years to fully implement and is occurring at a time of softness in the homewares sector, and so Bed Bath remains vulnerable to continued market share loss to competitors who have adjusted more quickly to the changing retail environment," added Holloway. 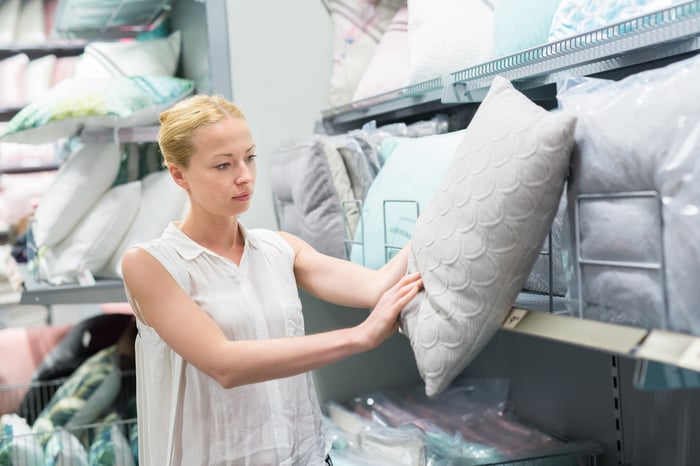 Concerned investors should take a breath, and try to put those ratings into simpler terms. In its simplest form, the move from Baa3 to Ba2 moves Bed Bath & Beyond's rating from the low end of investment grade, to the higher end of non-investment grade speculative. More specifically, that moves the retailer from being "adequately" capable to meet its financial commitments to being "less vulnerable" than other low-rated entities, but acknowledges the company faces significant uncertainties and exposure to outside conditions that could hurt its ability to meet financial commitments.

In other words, this doesn't tell us much we don't already know, except that the company could pay more to finance its debt. But we already know that Bed Bath & Beyond is embarking on a massive turnaround and that market demand and competition, potential economic downturns, and perhaps even trade uncertainty could simply be more headaches and add to the risk already facing investors.

Here's the bottom line: New CEO Mark Tritton has already made management changes and announced a number of moves to get Bed Bath & Beyond's turnaround moving in the right direction. If you believe management's efforts will put the company back on track long-term, this downgrade isn't a development you should concern yourself about, despite today's decline.