Please ensure Javascript is enabled for purposes of website accessibility
Log In Help Join The Motley Fool
Free Article Join Over 1 Million Premium Members And Get More In-Depth Stock Guidance and Research
By Adria Cimino - Updated Feb 4, 2020 at 6:51AM

Beyond Meat has tempted investors with great gains, but an unfolding lawsuit could make the stock one they no longer want on the menu.

Shares of Beyond Meat (BYND -2.46%), the producer of plant-based meat alternatives, have been flying high since the start of the year, even as competitors multiply and investors wonder whether earnings will eventually justify such gains. But an even bigger problem is waiting in the wings: a lawsuit brought by a former manufacturer of Beyond Meat's products. 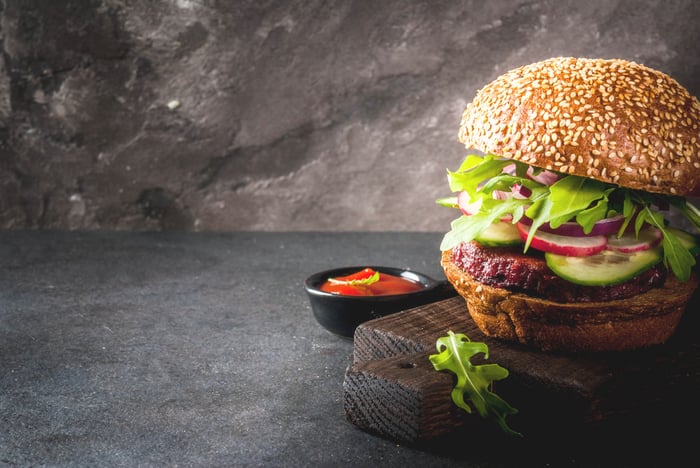 Don Lee Farms filed suit in May 2017, claiming Beyond Meat wrongfully terminated their manufacturing agreement and misappropriated trade secrets. The Beyond Burger was produced solely by Don Lee Farms in 2016. Then, a year later, Beyond Meat ended the deal.

If you look at Beyond Meat's initial public offering, it's clear that investors weren't too concerned at that time about these legal troubles. Beyond Meat's shares soared 160% the day of its market debut last May, and further gains followed, with the shares skyrocketing to a peak of about $234 a share two months later.

Even hints at costs stemming from the lawsuit didn't spark many fears. Beyond Meat's earnings reports show expenses related to the suit climbing 174% to about $2.3 million from the second quarter to the third quarter.

That might seem like nothing compared to the company's 250% increase in quarterly revenue to $92 million, but it represents more than half of Beyond Meat's net income for the quarter. By the date of the third quarter earnings report, the stock had come off its highs, but the legal news didn't drag the stock lower. And this year, Beyond Meat shares are back on the investment menu, with the stock climbing 50% this month.

According to a press release from Don Lee Farms, a judge ruled recently that the producer "proved the probable validity of its claim that Beyond Meat breached its manufacturing agreement." In a separate motion under a separate judge, the court granted Don Lee Farms' request to name Beyond Meat CFO Mark Nelson and two senior staff members in fraud claims. In this claim, Don Lee Farms alleges they intentionally omitted information pertaining to safety issues at Beyond Meat's facility from a consultant's food safety report, then delivered the altered document to Don Lee Farms.

So what does this mean for Beyond Meat? As we've seen in the earnings reports, it means legal fees that, as the lawsuit progresses, will grow and eat into profit.

But there's more. Beyond Meat warned in its Form S-1 (filed prior to its IPO) of the consequences if Don Lee Farms prevails. Beyond Meat could face damages applied according to the term of the contract, which was set to end in 2019, and may be ordered to pay Don Lee Farms' attorney's fees.

What does this mean for investors and Beyond Meat shares?

The trial is set for Feb. 8, 2021, so until that point (and until a decision is issued), expect share volatility.

Volatility isn't new to Beyond Meat stock. From the start of the year, its 30-day rolling volatility has been on the rise and now stands at about 98%. Usually, the higher the volatility, the stronger an investor's stomach will need to be.

Additionally, the mere naming of senior staff in claims linked to fraud could shake the confidence investors have in management, and that's never good. As for investing in the shares, which seem to soar with any spark of positive news or drop with any negative sign (or sometimes move as such without a catalyst), the lawsuit makes it difficult to feel serenity.

Though Beyond Meat is a leader in this growing market, pressure on prices caused by competition is one factor that presents a challenge as more and more players enter. But before we even get to that point, the weight of this lawsuit in the near term, no matter what the outcome, could make Beyond Meat shares difficult for investors to digest.

Editors Note: This article was updated on Feb. 4 to reflect new information.