Please ensure Javascript is enabled for purposes of website accessibility
Log In Help Join The Motley Fool
Free Article Join Over 1 Million Premium Members And Get More In-Depth Stock Guidance and Research
By George Budwell - Jan 31, 2020 at 9:00AM

Vertex Pharmaceuticals (VRTX -1.79%), a top-shelf rare-disease drugmaker, posted stellar fourth-quarter results after the closing bell Thursday. The company absolutely crushed Wall Street's consensus bottom- and top-line estimates for the three-month period, thanks to the outstanding performance of its new cystic fibrosis (CF) medication Trikafta, along with other key CF drugs like Symdeko/Symkevi.

Is Vertex's stock a strong buy on the heels of this outstanding Q4 report? That's a tricky question to answer. At present, Vertex sports one of the richest valuations in the entire healthcare sector, which would seem to indicate that this quarterly beat was already baked into the biotech's share price. A deeper look under the hood, however, reveals that this highly prized rare disease company is still a great buy for long-term investors. Here's why. 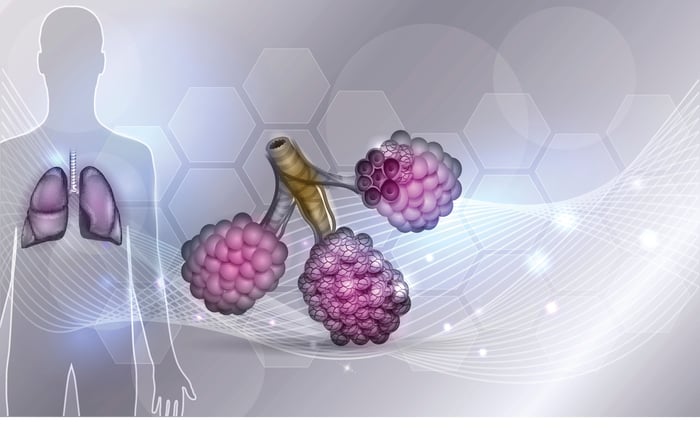 Vertex has earned its premium valuation. As things stand now, Vertex is the undisputed king of the CF drug landscape. What's more, there are no serious competitive threats to Vertex's dominance in CF. The company, in fact, won't even face a major generic threat in CF until the latter half of the next decade. And by then, there's a good chance that Vertex will have changed the game yet again, with the advent of an entirely new class of CF treatments.

The big deal is that CF is forecast to grow into a $10 billion-per-year drug market by 2026. So while Vertex's ginormous price-to-sales ratio of 16.36 may seem unreasonable at first glance, the truth is that the biotech's stock is probably only trading at something like six or seven times 2026 revenue -- and that may be a gross overestimate. The biotech, after all, is currently pursuing a diverse range of additional high-value indications.

What else does Vertex offer? Right now, the biotech has promising clinical and pre-clinical assets in development for alpha-1 antitrypsin deficiency, APOL1-mediated kidney diseases, diabetes, Duchenne muscular dystrophy (DMD), pain, and severe hemoglobinopathies. Vertex almost certainly won't come to dominate all of these high-value indications, but it should at least end up deriving a significant portion of its future revenue from sources outside the realm of CF.

The company's gene-editing collaboration with Crispr Therapeutics, for instance, could easily produce a few billion in annual revenue through the development of functional cures for the rare blood disorders sickle cell disease and beta thalassemia. Its cutting-edge work on deadly muscle-wasting disorders like DMD could turn out to be a game changer from a value-creation standpoint as well.

Another key area to keep an eye on is Vertex's rapidly growing war chest. At the end of the fourth quarter, the company reported having cash, cash equivalents, and marketable securities of $3.8 billion. With its free cash flows set to take a huge jump this year with Trikafta's commercial launch under way, the biotech may end the year with close to $5 billion in the bank. That's a healthy amount of cash for potential business development activities. Simply put, Vertex might emerge as a major force on the merger and acquisition scene in the not-so-distant future.

On the surface level, Vertex comes off as just another overpriced biotech stock due for a major correction. But that perfunctory assessment doesn't account for the biotech's rock-solid competitive moat in CF, first-class clinical pipeline, and proven track record of bringing innovative new treatments to market in a timely manner. Moreover, this biotech stock is arguably dirt cheap once you factor in its long-term commercial opportunity in CF -- and that's not even considering its massive potential in other disease areas such as diabetes, pain, etc. In short, Vertex's stock is worth the price of admission.