Please ensure Javascript is enabled for purposes of website accessibility
Log In Help Join The Motley Fool
Free Article Join Over 1 Million Premium Members And Get More In-Depth Stock Guidance and Research
By Danny Vena – Feb 2, 2020 at 10:45AM

After a year that marked tectonic changes, Disney is set to kick of 2020 with a bang.

Last year was a wild ride for theme park and movie maven Disney (DIS -3.20%). The company released the biggest grossing movie of all time, opened massive new additions to its theme parks, and launched its highly anticipated streaming service -- all while closing on the biggest acquisition in Disney's history.

2020 marks a new chapter for the House of Mouse, and Disney is scheduled to update investors when it reports the results of its fiscal first quarter after the market close on Tuesday, Feb. 4.

Three topics in particular will be on the minds of investors, and could play a big part in the company's success or failure now and in the months to come. 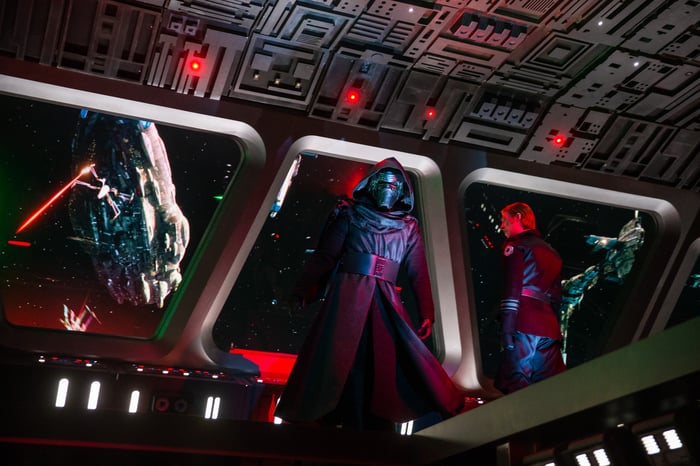 Kylo Ren in the Star Wars: Rise of the Resistance attraction at Disneyland. Image source: Disney.

Rise of the Resistance

The latest addition to Disney's Star Wars theme park debuted at Disneyland to much fanfare early last month, and the attraction is being hailed by fans and critics alike.

The Rise of the Resistance succeeds at completely immersing guests in the action, and blurs the line between where the line ends and the ride begins. Guests become part of the narrative, and are captured by forces of the First Order -- with Disney cast members playing the role of soldiers from the evil empire.

This provides a much needed win for Disney, which saw a rare dip in its domestic theme park attendance in 2019. The successful rollout of the latest addition to the Star Wars land could bring back fans in force and reinvigorate the company's waning guest visits.

All eyes on Disney+

After years of speculation and months of anticipation, the long-awaited debut of the company's Disney+ streaming service took place on Nov. 12. The following day, Disney announced that, including those who signed up early, its rolls had swelled to more than 10 million by the end of the first day, driving its stock to a new all-time high. At the time, management announced it wouldn't be updating subscriber numbers again until the company's regular quarterly report.

There's been a great deal of guesswork about whether the platform's momentum continued after the initial rush.

There's evidence to suggest that Disney+ closed out the year with as many as 25 million subscribers, based on consumer surveys and the tally of app downloads since launch. The company has since launched in a number of international locales, which could provide a big boost to subscriber numbers, which investors will be watching closely.

Disney made an unprecedented move this week, closing down both its theme parks in China as the result of the coronavirus outbreak. On Jan. 26, the company announced on the resort's website that it would temporarily close Hong Kong Disneyland Park "out of consideration for the health and safety of our guests and cast members."

The company issued a similar communique the following day, saying it would also shutter Shanghai Disneyland Park. The company said it is in "close contact" with health officials in both areas and is monitoring the situation, but as of this writing there's no word yet as to when Disney will reopen these venues.

This could have a significant impact on Disney's results, as the outbreak comes amid Lunar New Year, which is a peak travel season for many residents. Shanghai Disneyland welcomed nearly 12 million guests in 2018, and J.P. Morgan analyst Alexia S. Quadrani estimates that the resort adds about $1 billion in revenue and $50 million in operating profits each year to Disney's coffers.

A small part of the big picture

While each of these components only represents a small part of Disney's overall empire, the success or failure of each will provide compelling insight into what lies ahead for the House of Mouse.

After years of stagnation, Disney was a winner among consumer discretionary stocks last year, beating the broader market and setting itself up for the future. We'll see the beginning of the next chapter when the company reports on Tuesday.