Please ensure Javascript is enabled for purposes of website accessibility
Log In Help Join The Motley Fool
Free Article Join Over 1 Million Premium Members And Get More In-Depth Stock Guidance and Research
By Adam Levy - Updated Apr 13, 2019 at 11:50AM

The entertainment giant still has a lot of work to do after it closes the acquisition.

Disney (DIS 3.79%) expects its $71.3 billion acquisition of Twenty-First Century Fox (FOXA) assets to close on March 20. The deal has been in the works for 15 months as Disney faced a bidding war for the company and sought regulatory approval from various government entities.

At the same time, Disney has been working to restructure its company and making plans to integrate the Fox assets. CEO Bob Iger said, "We'll hit the ground running as soon as the deal closes," at the company's shareholder meeting earlier this month.

Investors can expect a flurry of developments starting next week. 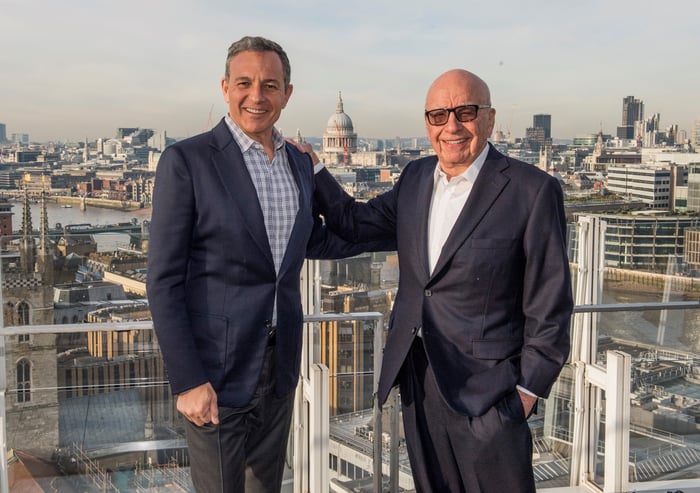 New Fox will focus on high-value television networks. It reportedly expressed interest in some Nexstar Media stations the company is divesting as part of regulatory conditions regarding its acquisition of Tribune Media. New Fox expects increased affiliate fees from pay-TV providers to fuel revenue growth along with increased ad spend on its news and sports networks.

The slimmed-down New Fox will have some valuable assets, but it'll be a very small company compared to what Disney is acquiring.

Disney and Fox have a lot of overlapping businesses, which means some jobs will become redundant within a single company and there's room to improve efficiencies by merging the two. In other words, there are going to be layoffs. As many as 4,000 jobs could be cut, according to a report from Variety. The first round is likely going to be mostly highly paid executives.

With a single movie studio, Disney will be able to remove redundancies in its distribution, marketing, and sales departments. It might also better focus its studio productions or shift some of those efforts to its direct-to-consumer streaming platforms.

Overall, Disney is looking for $2 billion in cost synergies after it closes the Fox acquisition. Investors should expect significant overhauls over the next few months as Disney looks to cut costs.

The company's having a harder time than anticipated selling them. Disney originally estimated their value around $20 billion, but after several potential bidders turned out to be uninterested the assets appear to be worth about half that amount. Disney has fielded two rounds of bids from Apollo Group, Sinclair Broadcasting Group, and Major League Baseball, but it hasn't named a winning bidder.

Complicating factors, Disney might split up the package of 22 networks, and sell the YES Network -- the Yankees' network -- back to the Yankees and several other investors, including Amazon. YES is the most valuable of the regional sports networks, and it might discourage bids for the rest of the package.

Disney will have 90 days following the close of the Fox acquisition to divest the RSNs.

One of the biggest reasons Disney made the move to acquire Fox's assets was to fortify its direct-to-consumer streaming efforts. Disney will acquire Fox's 30% stake in Hulu as part of the deal, giving it a majority share of the company.

Iger plans to leverage Fox's television production assets to increase the amount of original content on Hulu. He also sees an opportunity to expand Hulu internationally.

Meanwhile, the company is set to launch Disney+ by the end of the year. The service will focus mostly on Disney productions and intellectual property, but there's certainly room for ancillary productions from Fox. At launch, Disney+ will include content from other studios. "The Fox deal hasn't closed yet, so we can't take advantage of some of their output capabilities," Iger told analysts during the company's first-quarter earnings call. "We need to launch the service with some volume and it takes time to ramp up."

Streaming is a massive focus for Disney going forward. It restructured the company to give investors a clearer picture of its direct-to-consumer business. The addition of Fox will enable Disney to start pushing its streaming investments forward.

There's a lot on the horizon for Disney and Fox shareholders. We'll learn more at Disney's investor day next month.