Please ensure Javascript is enabled for purposes of website accessibility
Log In Help Join The Motley Fool
Free Article Join Over 1 Million Premium Members And Get More In-Depth Stock Guidance and Research
By Keith Speights - Feb 2, 2020 at 7:30AM

At least one of these bets is already looking like a smart move.

During Amgen's quarterly conference call on Thursday, the company's management talked about plans to move past what they called the "transition year" of 2019, a reference to the challenges the company faced with several of its older drugs facing biosimilar and generic competition. Their comments focused to a large extent on three big bets that Amgen is making to drive future growth. What are these bets -- and will they pay off for investors? 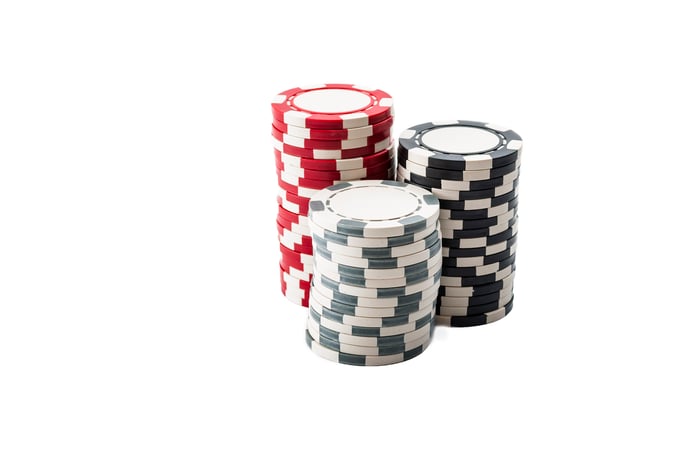 Amgen acquired Otezla a few months ago, thanks to regulators requiring Celgene to sell the blockbuster drug to pave the way for its acquisition by Bristol-Myers Squibb. If there was any doubt about how important this purchase was for Amgen, they should be erased by the biotech's 2020 outlook. The company expects revenue for its base business to be flat year over year. Amgen's return to revenue growth will be driven by Otezla.

The addition of the immunology drug will help Amgen in other ways, too. CEO Bob Bradway said that the company's Humira biosimilar, Amgevita, "will benefit from our recent acquisition of Otezla." He thinks that Otezla will help Amgen build its business in China and Japan. Murdo Gordon, Amgen's executive vice president of global commercial operations, said the company is also "excited about potential synergies between Otezla and Enbrel."

More acquisitions could be on the way. At the J.P. Morgan Healthcare Conference earlier this year, Amgen's executives hinted that the company could be interested in bolstering its nephrology pipeline. Bradway confirmed in Amgen's Q4 call that the company isn't "investing in discovery research in nephrology right now, but we are going to look for business development opportunities there."

Amgen has great expectations for the Asia-Pacific region. Bradway stated, "Over the next decade, we expect this region to account for as much as 25% of Amgen's growth." And the key to unlocking that potential growth is the biotech's partnerships.

Bradway said that over two-thirds of its Asia-Pacific growth in Q4 stemmed from its joint venture with Astellas Pharma (ALPMY -0.16%) in Japan. However, Amgen will buy 49% of the shares in this joint venture currently held by Astellas on April 1, 2020, for what CFO Peter Griffeth called "a nominal fee." This transaction will make the joint venture a wholly owned subsidiary of Amgen.

While Japan is the third-largest pharmaceutical market in the world, China is second only to the U.S. Amgen's collaboration deal in China with BeiGene (BGNE 4.29%) closed in early January, giving Amgen a 20.5% stake in the Chinese biotech. BeiGene will market three of Amgen's cancer drugs -- Xgeva, Kyprolis, and Blincyto -- in China and work together on other experimental cancer drugs in Amgen's pipeline. Bradway said that "we're excited by what our two companies can achieve together."

Probably the biggest and most important bet that Amgen is making is on its pipeline. Bradway highlighted several key pipeline updates on the way this year, including data readouts for AMG 510 in treating solid tumors, tezepelumab in asthma, omecamtiv in heart failure, and Otezla in mild-to-moderate psoriasis.

While all but the AMG 510 results will be from late-stage clinical studies, it's probably fair to say that none of these pipeline updates will be game-changers for Amgen. For example, with respect to omecamtiv, David Reese, Amgen's head of research and development, acknowledged that "the heart failure treatment landscape is expected to change based on recent data from other drug classes," a reference to FDA approval for AstraZeneca's Farxiga in reducing the risk of hospitalization for heart failure in type 2 diabetes patients.

But Amgen does have some potential game-changers in its pipeline, namely its bispecific T-cell engager (BiTE) drugs in development. Reese said that the company "remain[s] enthusiastic about our BiTE platform, and 2020 will be an important year." He also mentioned that Amgen has seen "the sort of pharmacodynamic activity and early suggestions of anti-tumor activity that are reminiscent of the early days of Blincyto and that give[s] us encouragement that we're on the right track." Amgen expects to provide updates for several of its BiTE clinical studies this year.

Will Amgen's big bets pay off for investors? The answer seems to be a resounding "yes" when it comes to the company's purchase of Otezla. My view is that Amgen's deals to strengthen its position in the Asia-Pacific region are also good investments.

The jury is still out on Amgen's pipeline, though. It's possible that the company's BiTE drugs will be big winners, but there's a real chance that they won't be nearly as successful as Amgen hopes they'll be.

My view is that Amgen continues to be a solid dividend stock. In fact, Peter Griffeth stressed that the company is "committed to returning capital to shareholders in the form of growing dividends." I'm not as bullish about Amgen's growth prospects in the near term, however. I think some of the biotech's big bets need to begin paying off in a more significant way before Amgen will return to strong growth.