The hit game continues to break records, but its success could create a tricky dilemma for Take-Two.

Take-Two Interactive (TTWO -2.35%) has hit the jackpot with its latest casino-focused expansion for Grand Theft Auto V's (GTA V) online mode. The game's multiplayer mode had its best-ever monthly player count in December, an incredible feat given that the game has now been on the market for over six years.

Most video game sales are front-loaded, meaning they put up the majority of their sales within the first few months after release and then see relatively quick declines. That's changed somewhat over the last decade, as developers have aimed to move games closer to a services-type model and put heavy emphasis on online multiplayer and downloadable content expansions, but it still holds true. Grand Theft Auto V is the extreme outlier, and continued sales for the base game and strong player spending on its multiplayer mode have helped Take-Two post stellar stock performance.

The company's shares are up roughly 650% since GTA V's release. What comes next? 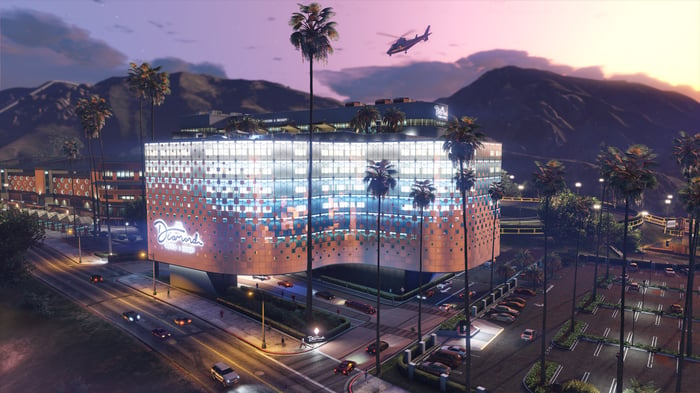 Grand Theft Auto V first released on Microsoft's Xbox 360 and Sony's PlayStation 3 in September 2013. The game broke records upon release, managed to ship more than 34 million units less than a year after its release, and its incredible run was just getting started. Take-Two released an updated version of the game featuring better graphics and other improvements for the more advanced Xbox One and PlayStation 4 consoles in November 2014 and then brought the game to PC in April 2015.

This staggered release schedule proved enormously successful, and the level of attention to detail and generally high quality in the core game combined with well-timed updates for the title's much-loved online multiplayer propelled Grand Theft Auto V to incredible performance. GTA V not only came in as the best-selling game of the last decade, it's also the best-selling game of all-time and the single most profitable entertainment release in history, according to some calculations. It came in as 2019's 11th best-selling game overall in the U.S., and record-setting engagement for the game's online mode in December proves the title still has plenty of life in it.

With GTA V's online mode still putting up such tremendous results, Take-Two actually has a bit of a predicament on its hands. As I detailed in an article published in December, the publisher has an incentive to replicate the release schedule that helped turn Grand Theft Auto V into a record-shattering sales success. However, the company may be hesitant to debut a sequel while the most recent series installment is still breaking records.

GTA V's online mode is hugely profitable because it's much cheaper for developers to add new content to the existing game world then build an entirely new title. Take-Two would likely prefer to avoid crimping that cash stream prematurely.

As a Take-Two shareholder, my hope is that the new Grand Theft Auto installment is on the near horizon and will debut only on Sony and Microsoft's current console hardware before eventually getting an updated release on next-gen platforms. Grand Theft Auto V and its online mode have had tremendous runs, and while the game is still putting up great performance, there's a unique window of opportunity to repeat GTA V's release timing success that could prove very rewarding for the company and its shareholders.

New consoles from Sony and Microsoft are set to launch near the end of 2020. Take-Two Interactive could release its next Grand Theft Auto game for each company's current-gen hardware platform and wait roughly a year before launching an improved, next-gen version of GTA VI for the new console platforms and PC. This would allow the company to take advantage of the large combined user base of the PlayStation 4 and the Xbox One, which will have been on the market for roughly six years and amassed a combined installed base north of 150 million.

Take-Two could conceivably sell more than 40 million units of the next Grand Theft Auto between just the PlayStation 4 and Xbox One platforms across the game's first year on the market. Using this strategy would also allow Take-Two to start with a large addressable market for GTA VI's online mode instead of having to wait for the user bases of the next-generation PlayStation and Xbox consoles to scale up. The company could then capture repeat sales from players who want to experience the upgraded version of the game on next-generation consoles and PC.

It's virtually certain that the next GTA game will be a huge hit. The franchise's developer has a fantastic history of quality releases, and no gaming franchise in the current industry has bigger brand clout. However, for Take-Two and its shareholders, there is the question of timing.

What's Take-Two's outlook outside of GTA?

Grand Theft Auto remains the single most important property for Take-Two, but the company has done an admirable job of filling out its franchise catalog. The company reported that the online mode for its Western action game Red Dead Redemption 2 tallied record engagement in December, and its NBA 2K basketball franchise has been putting up phenomenal unit sales and online spending.

Recent hits like The Outer Worlds and Borderlands 3 have also been a boon for Take-Two, and an upcoming game in the company's critically acclaimed Bioshock series gives the publisher another title on the horizon with triple-A potential. In addition to its console and PC offerings, Take-Two has also been ramping up its development for mobile and has big room for expansion in the space.

So, while the company's next moves for the Grand Theft Auto franchise will likely be the biggest factor in its performance over the next five years, it's also fair to say that the business has never looked stronger as a whole.