A unique entertainment company got body-slammed again, while a noted name in big food disappointed with its latest quarterly results.

So far, this week for stock market investors is shaping up to be a better one than its predecessor. The coronavirus scare seems to have abated somewhat, while the latest official release of U.S. manufacturing data provides hope for that slice of the economy.

But, this being Monday, there was some discouraging news affecting certain name stocks. Here's a pair that got body-slammed on Monday. Hopefully for investors they'll manage to get off the mat and back into the fight in the coming days. 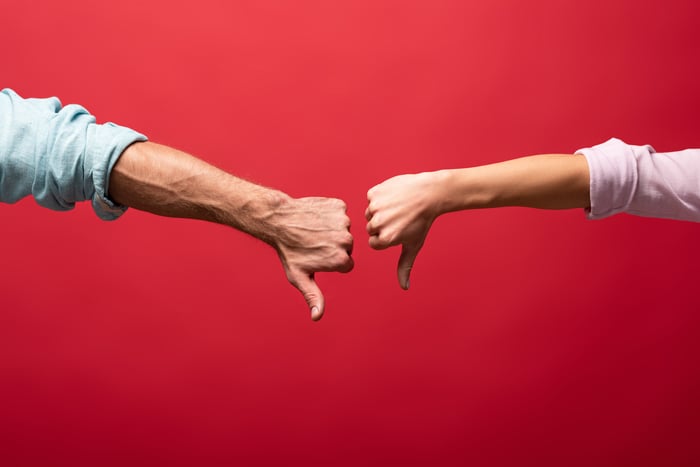 World Wrestling Entertainment (WWE 1.42%) is about to put on its latest big show for investors. No, I'm not talking WrestleMania or the recently aired Royal Rumble. I'm referring to Q4 of fiscal 2019 results, which are to be unveiled on Thursday.

Investors seem to be sensing danger in these figures, and they're heading for the exit doors -- the stock sank by nearly 6% on Monday. Those investors are probably still spooked by the departures of co-Presidents and board members George Barrios (also the CFO at the time of his departure) and Michelle Wilson late last week.

In the wake of those sudden and unexpected developments, several banks severely dimmed their outlook on the company -- particularly Morgan Stanley, which eviscerated its price target on the stock from $80 per share to $54.

As a pure entertainment company (albeit with a decent side hustle in branded merchandise), WWE has earnings that are often volatile and frequently hard to predict. It's also, at the end of the day, a family business, with patriarch Vince McMahon still calling many of the shots after all these years.

Barrios and Wilson, although they were hardened company veterans, might have somehow represented a real or imagined challenge to McMahon and his brood. I'm not convinced this is a particularly worrisome development; WWE shareholders have known for years who the most important, unassailable, and powerful person at the company is.

That said, WWE's lack of explanation for the bye-byes is worrisome, as is the abruptness of the situation. Something's up, I think, and we're not getting the full story.

I'm not quite ready to sell my WWE shares yet -- the company is good at what it does, and its stock is unique in the entertainment sector -- but I'm certainly keeping a wary eye on developments... and hoping that the upcoming earnings report isn't too disastrous.

What made investors unhappy? In a word, revenue. The company's top line was $15 billion, a nearly 2% increase year over year. Analysts were looking for slightly more growth; collectively, they were modeling a result that was closer to $15.1 billion.

Sysco is a fairly mature business that tends to be a rather good cash generator, despite its lack of exciting growth. To my mind, it's very much an income stock -- in fact, it's a Dividend Aristocrat, with 51 straight years of annual dividend raises behind it.

Given my weakness for good income stocks, I'd look past the top-line disappointment and be encouraged by the company's continued profitability and its prudent cash management. For income investors particularly, I think this could be a good buy after today's hit to the share price.