Please ensure Javascript is enabled for purposes of website accessibility
Log In Help Join The Motley Fool
Free Article Join Over 1 Million Premium Members And Get More In-Depth Stock Guidance and Research
By Beth McKenna - Updated Feb 6, 2020 at 11:18AM

Shares of this space tourism pioneer have out-of-this-world growth potential -- and risk.

Infrastructure (which literally means "below a structure"), however, has a broader meaning. Simply, it's the underlying structure of a society and its economy -- and "society" can range in scale from a municipality to the entirety of the Earth and beyond.

That "beyond" is our focus here, as we explore commercial space tourism pioneer Virgin Galactic Holdings (SPCE -1.48%). 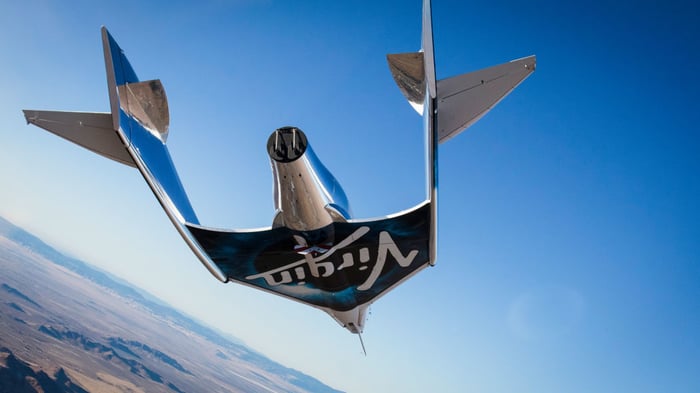 Virgin Galactic went public at $11.79 per share on the New York Stock Exchange last October via a reverse merger. (This method allows private companies to go public more quickly and less expensively than the traditional initial public offering, or IPO, route.) It's the first pure play on the burgeoning space economy, which will be worth $1.5 trillion, or about 5% of U.S. gross domestic product (GDP) by 2040, according to estimates by the U.S. Chamber of Commerce.

As its name reflects, Virgin Galactic is part of British billionaire Sir Richard Branson's Virgin Group empire. Together with its wholly owned manufacturing subsidiary, the Spaceship Company, Virgin Galactic is "developing and operating a new generation of space vehicles to open space for everyone." In short, the company aims to be the world's first commercial spaceline.

Virgin Galactic, founded in 2004, has its sights set on launching the world's first commercial spacecraft into suborbital space with paying passengers on board sometime this year. Whether this goal -- which has been repeatedly pushed back -- is accomplished in 2020 remains to be seen, but the company has been making great progress. Its many notable recent firsts (according to the company's fall 2019 investor presentation) include "first commercial space vehicle to put humans into space," "first crewed space launch from U.S. soil since 2011," "first non-pilot crew member flown on a commercial space vehicle," and "first non-pilot crew member flown at [a speed of] Mach 3+."

As for paying passengers, 603 people plunked down returnable deposits between 2005 and 2014 for the $250,000-per-person tickets. In 2014, Virgin Galactic halted ticket sales after a crash killed a pilot during a test flight in California's Mojave Desert, where the Spaceship Company's Mojave Air and Space Port is located. Virgin Galactic plans to reopen sales later this year, its CEO George Whitesides -- previously NASA's chief of staff -- said on CNBC's Squawk on the Street. He noted that demand for tickets has been steadily increasing recently, which makes sense given the company's two recent successful test flights to the edge of space. 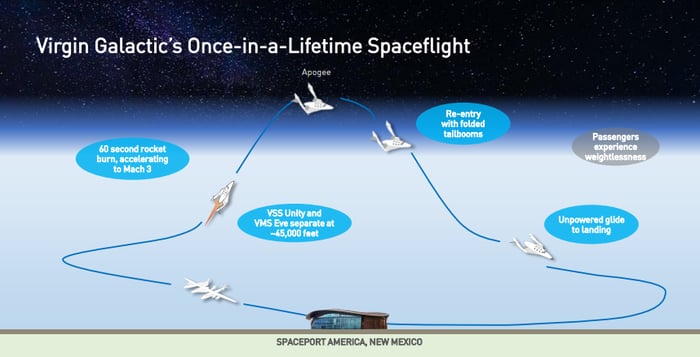 Both test flights previously noted were made by VSS (Virgin Spaceship) Unity, the company's only fully complete passenger-carrying spaceship, a SpaceShipTwo-class (or SS2-class) vehicle. (Yes, the terminology can get confusing. Unity is SS2-1, while the next completed spaceship will be SS2-2 and also be named, and so on.) Earlier this month, the company announced that its second vehicle is now structurally complete and that it's making solid progress on its third. Its reusable winged spaceships can hold two pilots and six passengers.

While test flights are made from the Mojave Air and Space Port in California, Virgin Galactic's commercial operation will be run from its Spaceport America in New Mexico, which it touts as "the world's first purpose-built commercial spaceport."

The company's spaceships are carried to a launch altitude of about 45,000 feet by a two-piloted carrier aircraft, or WhiteKnightTwo (WK2). It uses this launch method for its "critical safety advantages, including horizontal takeoff and [runway] landing." By contrast, Amazon CEO Jeff Bezos' Blue Origin -- poised to be a competitor -- uses a vertical launch and a parachute capsule landing. 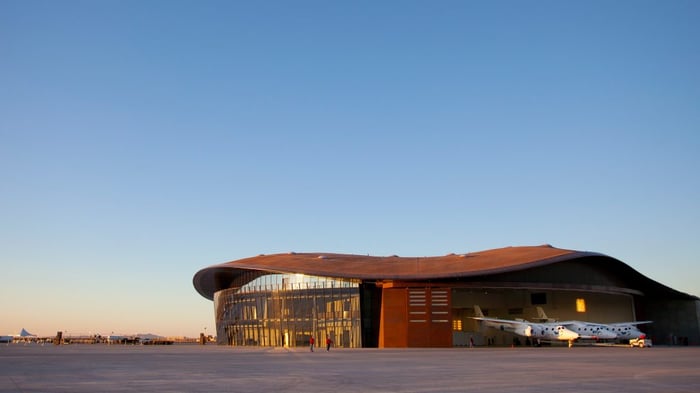 As you'd expect of such a newly public company in a capital-intensive business, Virgin Galactic is not profitable. Over the trailing 12-month period through the third quarter, the company generated revenue of just $4.5 million and racked up losses totaling nearly $184 million. There is some good news on the financials front, however: The company has no debt.

Of course, if and when it starts taking those millionaires and billionaires to space and booking $250,000 (or more) per passenger, its revenue should gain altitude quickly. (Ticket prices should come down over time thanks to economies of scale and technological advances.) Assuming it starts its commercial operations this year, the company is projecting it will generate very modest positive EBITDA (earnings before interest, taxes, depreciation, and amortization) in 2021, and more substantial positive EBITDA beginning in 2022.

Virgin Galactic stock, which has a $3.4 billion market cap, closed on Friday at $17.15 per share, bringing its gain since it became publicly traded to 45.5%. But the share price hasn't gone straight up. The stock lost altitude after joining the public markets, bottoming at a closing price of $7.22 in early December before beginning its strong ascent.

Investors will get a better look at Virgin Galactic's financials soon, as the company is slated to release its fourth-quarter and full-year 2019 results after market close on Tuesday, Feb. 25. However, the more meaty event that day should be its analyst conference call, scheduled for 5 p.m. EST.

Is Virgin Galactic stock worth buying?

The stock is at least worth putting on your watch list provided you're comfortable with risk. That risk largely stems from the fact that Virgin Galactic might not be successful. The company could probably bounce back from one early-on crash resulting in multiple customer deaths, but several crashes involving fatalities within a short time could put a big damper on passenger demand and investor enthusiasm.

Virgin Galactic stock is speculative -- and you should invest only what you can afford to lose. That said, the stock could have out-of-this-world growth potential if the company succeeds.