Please ensure Javascript is enabled for purposes of website accessibility
Log In Help Join The Motley Fool
Free Article Join Over 1 Million Premium Members And Get More In-Depth Stock Guidance and Research
By John Bromels – Feb 3, 2020 at 9:49AM

The stock market may be focusing on one often-overlooked metric.

Sometimes, a company reports better-than-expected earnings numbers that cause its price to pop: it opens higher and trends upward throughout the day. Other times, the market isn't impressed by the numbers and shares open lower, and continue to fall.

But sometimes the stock market does an abrupt about-face on a company. That's exactly what happened to homebuilder M.D.C. Holdings (MDC 4.41%). As it was announcing strong earnings on Jan. 30, shares were opening about 4% higher, at $48.99/share. Within minutes, it had given up all those gains. It proceeded to lose 8.1% over the next two days. 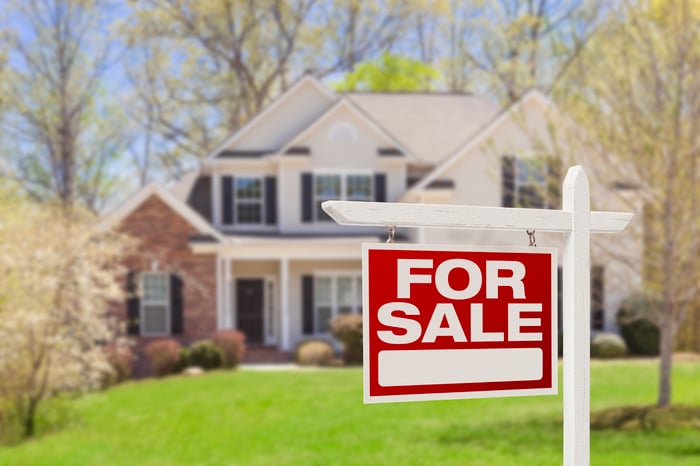 The earnings numbers were spectacular, both in terms of year-over-year growth and that they handily beat the consensus of $1.42/share. But really, numbers were good across the board. The company saw a boost in deliveries during the quarter, but also a 49% jump in net new orders for homes, which is unusual for the October through December quarter.

CEO Larry Mizel commented on this during the earnings call: "[D]emand remained elevated [in] what is typically a less active selling season. We have seen this momentum carry into the New Year and believe that home shoppers are showing a noticeable interest in starting the home buying process now, rather than waiting until spring. This obviously bodes well for our industry as a whole and for our company."

Sure enough, demand was up year over year in all three of the company's sales regions: 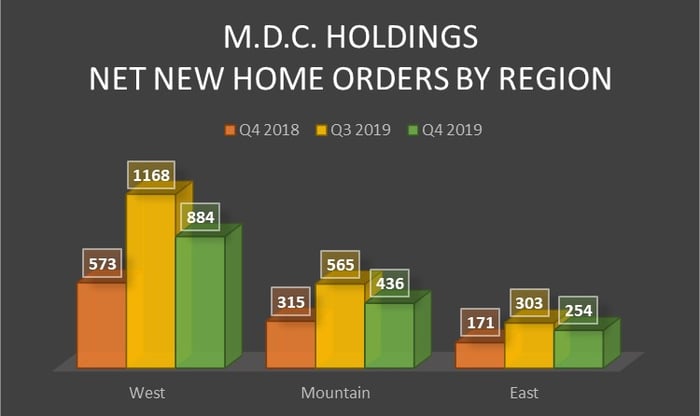 Orders rose year over year, but were down from the prior quarter's summer selling season. Data source: M.D.C. Holdings earnings releases. Chart by author.

One of the only faults you could find with the earnings report was the slight decline in average selling price. However, according to Mizel, that's part of a company strategy "to focus on the more affordable segments of the market due to the ongoing lack of supply and broad-based demand we have witnessed." In fact, the company's "more affordable offerings" made up 62% of closings, up from 49% in the fourth quarter of 2018.

The company also saw its gross margins shrink from the third quarter by 30 basis points to 18.5%, despite management projecting "slightly higher" margins three months ago. According to CFO Robert Martin on the earnings call, this was due to a higher volume of sales in markets that were seeing weaker margins like Phoenix and Orlando. However, these sales reduced the company's backlog of lower-margin homes, which means its current backlog is expected to generate even higher than anticipated margins in 2020.

As you can probably guess, the company feels good about where it's heading in 2020. Management believes that the changes in its backlog will result in first-quarter gross margins of between 18.8% and 19.2%, compared to the 18.5% gross margin M.D.C. averaged in Q4 2019.

M.D.C. had previously announced a 10% increase in its quarterly dividend, to $0.33/share, marking the company's fourth consecutive year of dividend increases and bringing the yield to 2.8%.

Mizel sure thought the company's numbers were stellar, saying in a statement:

MDC finished the year on a strong note, generating fully diluted earnings per share of $1.42 in the fourth quarter, a 61% increase as compared to last year. We also achieved year-over-year improvements in our homebuilding gross margin and SG&A leverage, resulting in homebuilding operating margin expansion of 150 basis points. The sales environment continues to be favorable, as evidenced by the 49% growth in unit orders for the quarter. These demand trends have carried into the new year, giving our business strong momentum as we head into the spring selling season.

For the full year 2019, we posted year-over-year improvements to both revenue and profitability, which resulted in fully diluted earnings per share of $3.72. This marks our fifth consecutive year of net income growth, and we are well positioned to continue that trend in 2020 thanks to a 29% increase in homes in backlog to start the year. We also ended the year in a strong financial position with a year-over-year decrease in our debt to capital ratio.

It's not really clear why the market decided to sell off shares of M.D.C., but on the earnings call, analysts seemed most concerned that the company's strategy of selling more entry-level homes might be the cause of lower margins, and that if they became an even larger part of M.D.C.'s sales mix, margins could shrink further.

Mizel and Martin pushed back on these suggestions, noting that with affordable homes already at 62% of the sales mix, there isn't room for them to expand. Seventy percent, they guessed, was probably the upper limit.

They also didn't think that the company's success in improving sales in the Phoenix and Orlando markets -- where margins were weaker in the fourth quarter -- meant that weaker-margin sales would balloon for the company. However, that seems like the most likely concern for the market.

Of course, the housing market is cyclical, and a recession or other economic slowdown would certainly have a major impact on M.D.C.'s shares.

But for those who think the industry still has room to run, M.D.C. looks like a good pick -- plus, its newly boosted dividend is one of the best in the sector.

MDC Holdings Stock Upgraded After Earnings: What You Need to Know