Please ensure Javascript is enabled for purposes of website accessibility
Log In Help Join The Motley Fool
Free Article Join Over 1 Million Premium Members And Get More In-Depth Stock Guidance and Research
By Keith Speights – Feb 4, 2020 at 7:31AM

The biotech company's failed Ebola drug could be effective against 2019-nCoV. But there's a bigger story for Gilead.

Gilead Sciences (GILD 0.21%) just might have moved into the pole position in the race to fight the coronavirus. On Friday, the big biotech announced that it's working with Chinese authorities on a clinical trial to evaluate remdesivir, which was unsuccessful as a treatment for Ebola, in treating the 2019-nCoV coronavirus strain that has caused serious health concerns throughout the world.

Remdesivir has previously demonstrated potential against MERS and SARS, two other coronaviruses that are similar in structure to 2019-nCoV. A study published in The New England Journal of Medicine last week reported that a man in Washington state with the coronavirus strain experienced improvement after being treated with Gilead's experimental drug.

Optimism about remdesivir fueled investors' excitement on Monday, sending Gilead's shares as much as 8.7% higher during the day. But there's an even better reason to consider buying Gilead stock now than its prospects for treating the coronavirus. 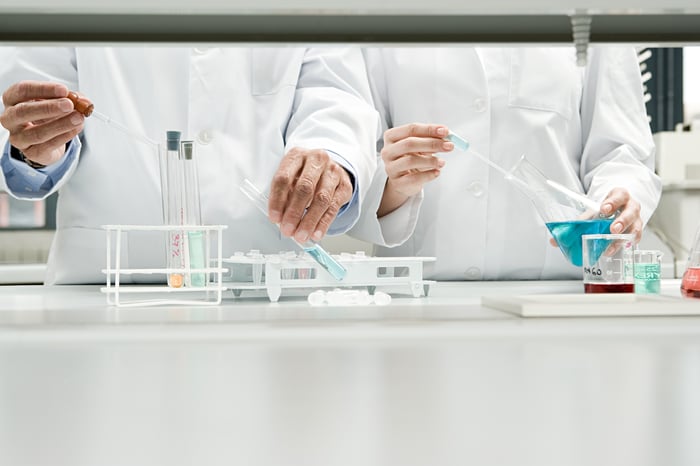 Perhaps the best reason to buy Gilead Sciences shares right now is the potential for the immunology drug filgotinib. There's no question that it's more important to Gilead's future than remdesivir is.

For one thing, filgotinib has already been evaluated in multiple late-stage clinical studies as a treatment for rheumatoid arthritis, and demonstrated both efficacy and safety. Gilead is currently waiting for regulators in the U.S., the EU, and Japan to hand down their decisions on it. By contrast, though remdesivir has shown promise as a possible treatment for coronavirus, there's no guarantee that it will be successful in clinical trials.

Then there are the drugs' relative market sizes: More than 1.3 million Americans have rheumatoid arthritis, as do up to 1% of the world's population -- around 78 million people in all. And as the size of the senior adult population grows across the world, the prevalence of rheumatoid arthritis will climb since the likelihood of developing the disease increases with age.

Compare those numbers to what has been seen so far with the coronavirus. As of Feb. 3, there were 17,391 confirmed cases of the virus, with more than 99% of them in China, according to the World Health Organization (WHO). The number of deaths resulting from the coronavirus 2019-nCoV strain totaled 361, with 360 of them in China.

Those are worrisome statistics, to be sure, as the number of confirmed infections is growing at an alarming rate. However, there are plenty of other diseases -- including rheumatoid arthritis -- that have greater health impacts globally, and which still would even if 2019-nCoV spreads significantly further.

There have been other coronavirus outbreaks in the past. SARS (severe acute respiratory syndrome) emerged in 2003. MERS (Middle East respiratory syndrome), made headlines in 2012. But despite initial concerns, no vaccine or antiviral drug has been approved for either virus strain.

Perhaps Gilead will make a lot of money if remdesivir proves to be effective at treating 2019-nCoV. But based on the past, there appears to be a good chance that worries will die down after this virus strain runs its course.

Meanwhile, analysts think that filgotinib will generate peak annual sales of around $3 billion in treating rheumatoid arthritis. Gilead is also evaluating the drug in several other autoimmune indications, including Crohn's disease, psoriatic arthritis, and ulcerative colitis. If filgotinib wins approval for all of those indications, it could rack up another $3 billion in annual sales.

Gilead liked the prospects for filgotinib so much that it spent $5.1 billion last year to expand its partnership with Galapagos, the biotech that initially developed it. Prior to this deal, Gilead owned the license to commercialize filgotinib. Now, the company also has an exclusive license and options rights to develop and commercialize all of Galapagos' programs everywhere outside of Europe.

Biotech stocks rise and fall on the prospects for their pipelines. As promising as Gilead's potential coronavirus treatment may be, filgotinib is clearly the crown jewel for right now. And there are more candidates potentially on the way that make Gilead appear even more attractive.

The company has multiple phase 2 and phase 3 clinical studies underway evaluating cell therapies to treat blood cancers. One analyst thinks that experimental long-acting HIV drug GS-6207, which is currently in early-stage clinical testing, could eventually be Gilead's biggest winner of all. Regardless of what happens with the company's efforts to treat this coronavirus strain, the big biotech's pipeline makes it worth a serious look for long-term investors.