Please ensure Javascript is enabled for purposes of website accessibility
Log In Help Join The Motley Fool
Free Article Join Over 1 Million Premium Members And Get More In-Depth Stock Guidance and Research
By Rhian Hunt – Feb 4, 2020 at 6:00AM

The fast-food giant continues working on growing its chicken and burger empire to 40,000 restaurants.

Restaurant Brands International (QSR -2.64%), or RBI, has big plans for profitable expansion this decade. The parent company of Burger King, Tim Hortons, and Popeyes Louisiana Kitchen declared its intention, back in May 2019, to increase its restaurant empire from the current 26,000 to 40,000 locations worldwide during the 2020s. Such a bold expansion would almost certainly lift its share value to a much higher level, but some questions remain about its indebtedness and its ability to actually deliver on launching 1,000 or more franchises each year to stay on target.

As part of its drive to expand its global empire of burgers, fries, coffee, and crunchy chicken, RBI outlined its strategy in its 2019 Investor Day presentation. The company currently has slightly more than 26,300 franchises open worldwide. While market penetration is highest in North America and Europe, several thousand outlets operate in Central America, South America, and Asia.

RBI identifies plenty of "unit gap" on the map that's still ripe for filling in with new restaurant openings. The biggest potential growth area is Asia, with a "gap" of approximately 27,000 restaurants. The gap measures the difference between RBI franchises and the largest competing chain. In the Asian market alone, RBI notes that the gap is 7,139 restaurants focused on burgers, 8,764 focused on coffee, and 11,472 serving chicken. The company identifies a 22,000-unit gap in North America, plus smaller totals still running into the thousands elsewhere. 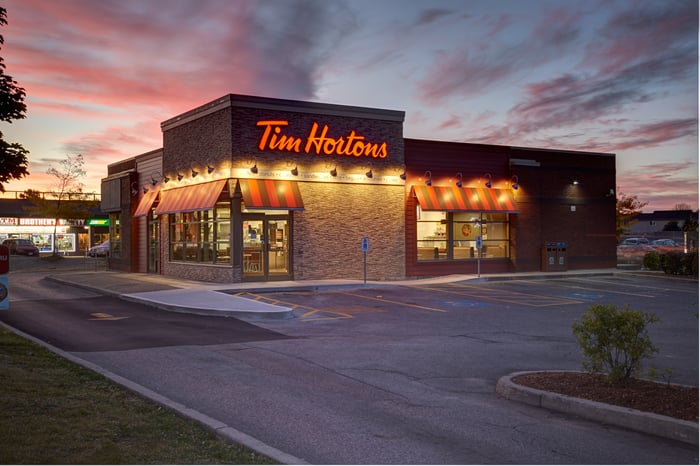 While RBI opened over 1,300 new restaurants each year in 2017 and 2018, with the majority of these being Burger King -- its most popular and successful brand -- its new openings faltered somewhat in 2019. While whole-year 2019 figures aren't available yet for new openings among the three franchises, Burger King grew by a net 436 outlets during the first nine months of the year. Popeyes and Tim Hortons opened franchises more slowly, so the company only added 567 new franchises, total, during the first nine months of 2019. A shortfall of several hundred below the goal of 1,000 openings seems certain.. However, the fact that RBI opened a "surplus" of approximately 300 restaurants per year in 2017 and 2018 likely means that the slower growth in 2019 hasn't derailed its goal of reaching 40,000 stores in the 2020s.

Does debt put RBI at risk?

RBI enjoys the advantage of having very little capital expenditure (capex) while expanding its number of branches. More than 99% of locations are franchised, with the franchisee shouldering most expenses. Its brands remain competitive with rivals such as McDonald's (MCD -1.62%), as seen in the recent results of the clash between McDonald's chicken sandwich versus Popeyes'.

Still, RBI carries a somewhat unusual amount of debt for a company that should have very low capex on operating expenses. This debt comes both from acquisitions and from property leases: RBI leases or owns 21% of physical restaurant locations, subleasing these to franchisees, while franchisees own or lease (from owners other than RBI) the remaining 79%. These leases represent RBI's single biggest capital expenditure in maintaining the restaurants themselves. The company debt totals $13.8 billion.

Shareholder equity, at the time of RBI's latest 10-Q filing with the Securities and Exchange Commission, stood at $4.1 billion. Its debt-to-equity ratio is approximately 336%, indicating a very high level of debt well above the restaurant industry's average 101%. However, the company's solid fundamentals in other areas, and the fact that its EBITDA (earnings before interest, taxes, depreciation, and amortization) provides 3.7:1 coverage on the debt, somewhat mitigates the risks involved. Operating cash flow rose more than 35% year over year from 2018 to 2019, and RBI currently musters about $1.7 billion in cash reserves. Around 70% of free cash flow is used to pay its 3.2% dividend yield, with the rest rolled back into building up the business.

For those interested in restaurant stocks, Restaurant Brands International may indeed represent a good buy. If it maintains its current level of success, it will continue to grow in value while offering a decent dividend yield. However, in my opinion, it may achieve even stronger growth in the medium to long term.

The company's three component brands don't have much menu overlap, dodging internal competition or redundancy. This helps RBI maintain exceptional flexibility in filling in the blank areas on its world restaurant map. Tim Hortons features a menu heavy on coffee, an extremely popular $6 billion a year market sector in China that's growing at a very rapid pace. Chicken is in high demand in South America, in particular Brazil, offering an excellent environment for developing a widespread network of Popeyes franchises. If RBI meets its ambitious expansion goals, it has the potential for large gains during the 2020s. If its actual performance is more modest, it still offers steady growth and an adequate dividend.