Is it all hype, or is the future really so bright for the electric vehicle pioneer?

The rise in Tesla (TSLA -6.42%) stock has become the hottest story in the stock market. After having faced real fears of financial strain less than a year ago, the electric vehicle manufacturer has seen its share price double in just the past month.

With a market capitalization topping $160 billion, Tesla has now become larger than U.S. Big 3 automakers General Motors (GM -1.99%) ($50 billion), Ford (F -2.72%) ($36 billion), and Fiat Chrysler (FCAU) ($26 billion) combined -- and almost enough room left over to toss on Mercedes-Benz manufacturer Daimler ($50 billion) for good measure. The move has left many wondering exactly how Tesla got here -- and what's ahead for the car company down the road.

All the attention people are paying to Tesla right now concerns its stock price. After going public in 2010 at $17 per share, the stock price rose steadily but slowly until 2013, when it soared to more than $200 per share. That first wave of excitement reflected the early success of the automaker's efforts in producing and selling its early electric vehicles. 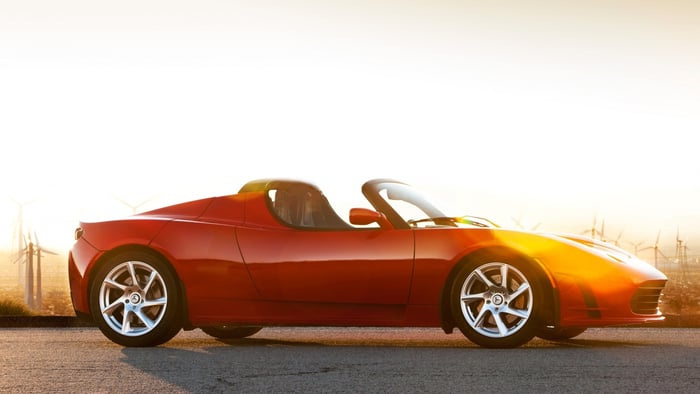 2017 brought a new surge higher, taking Tesla shares above the $350 mark. Yet that move higher reversed itself last year, as fears about whether the company was on a sustainable financial path, not to mention CEO Elon Musk's multiple public spats with the SEC, sent the stock back below the $200 mark briefly.

Once those fears subsided, investors got excited about Tesla's prospects again. Yet even in that light, the fourfold rise in Tesla stock over the past six months is remarkable.

The right way to look at Tesla

It's all too easy to get caught up in the ups and downs of Tesla's stock price. What's more important is to look at the company's strategic vision and future prospects. In the end, those fundamental aspects of Tesla's business are the only things that can justify the automaker's valuation.

In that light, what Tesla's done in such a short period of time is indeed extraordinary:

Even so, none of that explains why Tesla's stock is more valuable than those of four huge, established automaker giants combined. For that, you have to look to the future.

Sure, much of that future is tied to electric vehicles. The Model Y SUV is likely to come out this year, and the recent announcement of the Cybertruck generated a lot of publicity. Tesla's Semi electric-powered truck platform could expand the automaker's influence into the commercial vehicle realm as well.

But Tesla's early success with electric vehicle manufacturing is just the beginning of a long journey in Musk's eyes. For the Tesla CEO, electric vehicles were always only a portion of a broader vision of a world in which overall energy use was sustainable and mindful of global ecological concerns. Musk believes that autonomous driving isn't just a business opportunity but a way of making car travel far safer than it is today, regardless of what powers a vehicle using it. The things that are happening in its Gigafactories have the potential to go far beyond the auto industry, with applications in the solar energy and battery storage areas that would be valuable to vast swaths of the business world.

Trying to judge Tesla's future based on what it looks like today would be like basing Amazon.com's (AMZN 0.25%) prospects back in 1999 on its ability to sell more books online. It doesn't mean that Tesla's stock won't see a huge decline in the future, just as Amazon suffered in the years following the dot-com boom. But in the long run, what's far more important is whether Tesla keeps expanding its automotive operations while also finding new and exciting markets that can benefit from the company's vision. If it can, then even the recent surge in the car stock's  price might well prove justified in time.