Please ensure Javascript is enabled for purposes of website accessibility
Log In Help Join The Motley Fool
Free Article Join Over 1 Million Premium Members And Get More In-Depth Stock Guidance and Research
By Anders Bylund – Feb 4, 2020 at 9:17AM

The movie studio paid $75 million for the rights to the Broadway hit, but that includes a complete production of a proven household-name title.

You didn't think Walt Disney (DIS 0.03%) was done buying out blockbuster-quality content, did you? Good, because the House of Mouse just signed a $75 million deal for a single movie.

That might sound crazy at first glance, but this deal actually makes a lot of sense. You see, this is a neat package deal for a fully realized piece of cinematic drama. Disney just snagged the movie rights for Broadway mastodon Hamilton, and the film is actually already made. 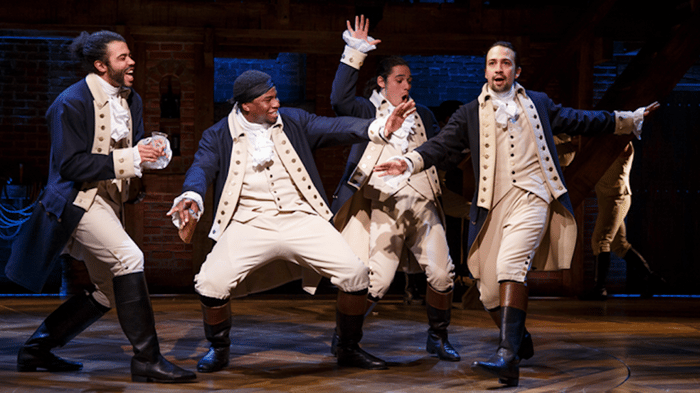 My name is Alexander Hamilton

The film will hit theaters under the Walt Disney Studios brand on Oct. 21, 2021. It is based on three live performances by the original Broadway cast, starring Lin-Manuel Miranda as the titular character, shot just a couple of weeks before members of the star-studded ensemble began ending their Hamilton run. In other words, the movie springs from the headline-making original cast at the top of their game, having polished their performances to a high gloss for more than three years.

The movie's runtime has already been set to two hours and 40 minutes, including a handful of additional shots made without an audience in the theater. Disney calls this approach "a leap forward in the art of live capture," putting cinema audiences in the middle of the action in a way that no stage show viewers ever experienced.

So this is a fully realized movie production, subject to another round of edits and special effects under Disney's wing. You should think of it more like a distribution deal than a Disney-branded production.

Who lives, who dies, who tells the story?

From that angle, it's important to remember that Disney didn't just grab the silver-screen rights to Hamilton but also the syndication and video-streaming rights. The ultimate American drama becomes an eyeball magnet for Disney+ in the long run, helping that service roll out around the world. That way, Disney also keeps this important title out of reach for pesky competitors such as Netflix and Amazon.com's Prime Video. The bidding war reportedly started right after the material was filmed in the summer of 2016, and it took nearly four years to settle the price tag and find a home.

The production company was in no hurry to finalize a deal, of course. As early as 2017, Miranda told The Hollywood Reporter that a movie version would come, but not for a few years so that audiences could enjoy the show on stage first.

How important is Hamilton to Disney?

Nobody expects Hamilton to generate billion-dollar box-office hauls like the content from Disney's Marvel, Pixar, and Lucasfilm buyouts did. It's just a single title, albeit a really juicy one that should generate a respectable return on the studio's original investment. So Hamilton, the Movie, isn't game-changing news, but it does show that Disney is just as committed to owning proven top-quality content as it ever was. All of this company's moneymaking operations start from that golden content portfolio at the heart of it all.

As a longtime Disney shareholder myself, I'm glad to see the company making a splash with this single-title deal. It's business as usual for the House of Mouse, and that's a good thing.