Please ensure Javascript is enabled for purposes of website accessibility
Log In Help Join The Motley Fool
Free Article Join Over 1 Million Premium Members And Get More In-Depth Stock Guidance and Research
By John Bromels – Feb 4, 2020 at 10:34AM

The top question on investors' minds is what the company will look like in a year.

There's a lot going on with Marathon Petroleum (MPC 0.64%) these days. At the urging of activist investors, the company is rethinking its strategy for its MPLX (MPLX 0.98%) subsidiary and planning to divest its Speedway gas station retail arm. Oh, and its longtime CEO -- the only one the company's ever had since it was spun off -- is retiring.

Given all that, it's no wonder that the company's quarterly numbers were something of an afterthought when Marathon reported lackluster earnings on Jan. 29. But there were indications that something unexpected might be occurring behind the scenes. Here's what investors need to know. 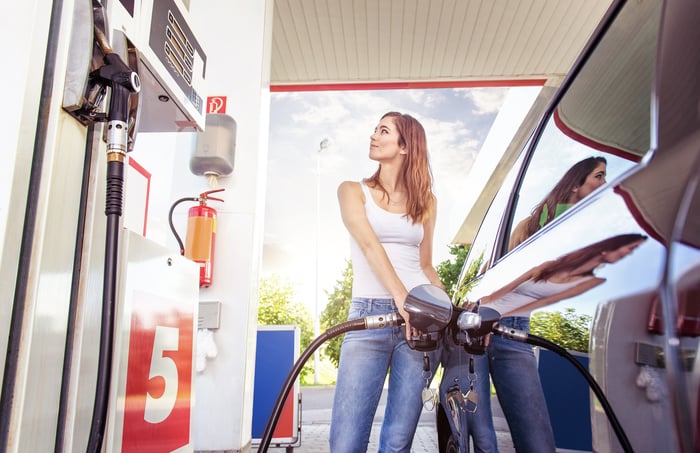 While revenue was up slightly, the earnings numbers look absolutely dreadful. However, the big reason for the massive year-over-year declines in net income and earnings per share was a $1.2 billion midstream goodwill impairment related to Marathon's master limited partnership (MLP) MPLX.

Absent that big impairment charge, net income would have still seen a slight year-over-year decline, as you can see when we break out net income by business segment (excluding impairments): While net income in the midstream segment held steady, in the company's other two divisions, it was down slightly. Data source: Marathon Petroleum. Chart by author.

After an initial 4% pop -- and a subsequent 5% drop -- Marathon's shares have been trending higher since the announcement, indicating that the market isn't too concerned about these issues. Instead, investors are likely more focused on the structural changes afoot within the company.

On Sept. 24, before Q4 started, activist investors at Elliott Management Corporation, which owns about 2.5% of Marathon's stock, unveiled a plan to break up the company. Under the plan, Marathon would divest its Speedway gas stations and other retail outlets, and also cut loose MPLX, its midstream MLP, leaving Marathon as a stand-alone refiner.

After another pair of prominent investors endorsed the plan -- and called for the ouster of CEO Gary Heminger -- Marathon put out a response, which didn't reject the structural changes outright, and didn't address the CEO issue. The market was pleased, and bid up shares.

On Oct. 31, as it released its Q3 2019 earnings, though, Marathon essentially adopted the investors' plan. The company officially announced it was planning to spin off Speedway as a stand-alone company, probably in Q4 2020. It said that it had formed a special board committee to review the midstream operations. Finally, it announced that Heminger would be retiring in 2020.

We didn't get any new status updates on all of this in the Q4 earnings release, except that the board committee was expected to make a report in Q1 2020. What we did hear about was pretty mundane by comparison:

In a statement, CEO Gary Heminger followed the typical playbook for an underwhelming quarter. That is, ignore the marquee numbers and focus on whatever minor figures are the most favorable:

Our commercial team optimized crude sourcing and product placement opportunities across all regions of our business. The team's commitment to execution enabled us to achieve 94% utilization and strong capture of 105% for the quarter. Across the retail footprint, our team converted over 700 stores since the combination, positioning us to capture merchandise growth and synergy opportunities. And within midstream, we advanced several long-haul pipeline projects that are key to the development of our integrated Permian-to-Gulf Coast logistics system and are expected to generate returns that meaningfully exceed our hurdle rates.

Many investors believe that Marathon's conglomerate structure -- that is, maintaining separate refining, pipeline, and retail station assets -- is holding the company back. In particular, they're excited about the prospect of Speedway becoming a stand-alone business. However, on Jan. 31, citing unnamed sources, Bloomberg reported that Marathon was exploring selling Speedway instead of spinning it off.

Parsing the language in Marathon's Q4 earnings call and press release doesn't rule out this possibility: The company refers to the Speedway "separation," which could be a sale or a spinoff. At one point on the earnings call, Heminger even referred to it as a "transaction," which sounds more like a sale than a spinoff, but really anything's possible at this point.

A spinoff is likely to unlock more value for existing shareholders over the long run, but a sale could result in a big payoff much more quickly. How Marathon ends up handling this transaction -- and the MPLX question -- is going to end up having a lot more of an impact on the company than this quarter's results. Interested energy investors should stay tuned.