Investors cheered as the judge ruled in favor of Biogen in this long-awaited case.

Biogen (BIIB -0.37%) is up 18% today as news regarding a crucial patent ruling came out in the company's favor. A U.S. appeals panels denied a patient challenge (otherwise known as an inter partes review, or IPR) for Biogen's multiple sclerosis drug Tecfidera, which was contested by a generic version developed by Mylan.

Administrative patent judge Sheridan K. Snedden ruled that Mylan had failed to demonstrate why some parts of Biogen's patent protecting the drug were unpatentable, which was the company's argument going into the case. 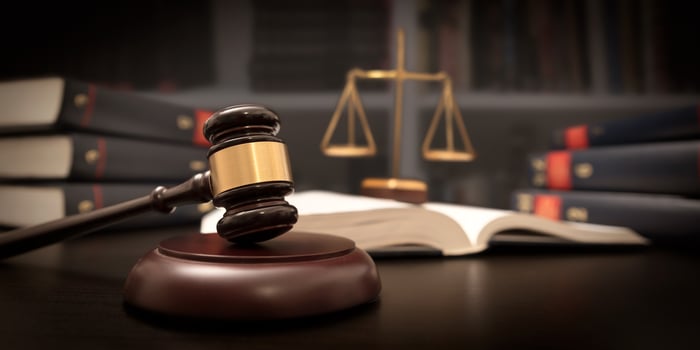 Tecfidera has been a major source of revenue for the pharmaceutical giant, generating $4.43 billion in sales for 2019 and has been the top-selling drug for the company since 2015. The loss of the patent would have meant that Mylan's cheaper generic drug could enter the market, siphoning off a major part of Tecfidera's revenue.

Even before the news broke, Biogen's stock had jumped as much as 30% on rumors that the patent ruling had been in the company's favor. While its good news nonetheless, analysts covering the issue have said that this surge is a bit of an overreaction.

Biogen is also developing an Alzheimer's drug known as aducanumab, which has been the subject of considerable debate over whether it will prove successful. While there are reasons to be optimistic about aducanumab, some experts have posited that the uncertainty regarding the Tecfidera patent has discouraged otherwise bullish investors from buying into the stock.

With that the uncertainty regarding the patent decision now out of the way, many aducanumab optimists are getting off the sidelines and buying shares of the biotech giant, hence in part why shares have surged so much.