Please ensure Javascript is enabled for purposes of website accessibility
Log In Help Join The Motley Fool
Free Article Join Over 1 Million Premium Members And Get More In-Depth Stock Guidance and Research
By George Budwell - Feb 5, 2020 at 10:23AM

Gilead's latest financial results may be ho-hum, but better days aren't far off.

What's ruffling the feathers of shareholders? The core issue is Gilead's anemic top-line guidance for 2020. Despite years of promising to boost sales by bringing new drugs to market, the biotech is essentially calling for revenue to slightly dip this year.

The underlying problem is that Gilead simply hasn't had much luck with the progress of its internal clinical pipeline outside of HIV and cell-based cancer therapies. Last year, for instance, the biotech's nonalcoholic steatohepatitis pipeline basically went belly up, putting it well behind the front-runners in the space. 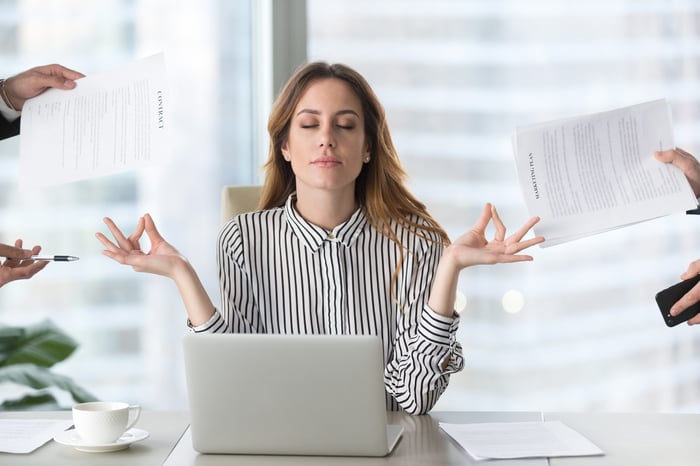 Despite all this doom and gloom, Gilead's shares actually look like a buy on the heels of this latest pullback. Here's why bargain-hunters might want to consider buying this underperforming large-cap biotech stock soon.

Even though Gilead's hepatitis C franchise continues to be a drag on its top line, newer products like the groundbreaking HIV treatment Biktarvy and novel anti-cancer therapy Yescarta have been pulling their weight in recent quarters. Biktarvy, for instance, hauled in a whopping $1.6 billion in Q4, and Yescarta posted a respectable $122 million for the three-month period. These two therapies have kept Gilead's top line afloat while its clinical pipeline and various business development activities slowly take shape.

While Gilead's homegrown pipeline candidates and recent acquisitions haven't yielded much in the way of new products lately, its external pipeline development efforts have been an unmitigated success. The biotech's sizable equity stake in Galapagos brought in the promising anti-inflammatory medication filgotinib, which should eventually reach megablockbuster status (more than $5 billion in annual sales). Filgotinib, in fact, should play a central role in the biotech's growth prospects for the better part of the current decade.

Gilead's enormous cash position of $25.8 billion gives it plenty of firepower for external licensing deals, as well as small to midsize bolt-on acquisitions. Keeping with this theme, the company has already stated that it will start to beef up its pipeline through licensing deals and a handful of acquisitions soon. And if any of these deals bring in another filgotinib, Gilead should be able to quickly accelerate its return to modest levels of top-line growth.

Finally, Gilead has one of the best shareholder rewards programs in the entire healthcare sector. The biotech has consistently raised its dividend over the past five years, and it has literally plowed billions into share buybacks as well. As things stand now, Gilead offers a forward-looking annualized yield of 3.94%. That's well above the prevailing average for its large-cap biotech peer group.

To be frank, Gilead's stock probably isn't going to do much in 2020. Until the biotech's top line perks up, its shares will almost certainly underperform the broader biopharma industry. That said, Gilead's new management team appears intent on changing this narrative soon. Filgotinib is close to its first regulatory approval; Gilead's cell therapy subsidiary, Kite Pharma, should have its second product on the market soon with Kite-X19; and the company also has a sizable war chest to spend on M&A.

Bottom line: Gilead's stock has likely reached a nadir In fact, the stage is now set for the biotech to return to high-growth status as soon as next year. So even though patience will definitely be required on the part of shareholders in 2020, it may indeed be time for growth investors to circle back to this name.