Please ensure Javascript is enabled for purposes of website accessibility
Log In Help Join The Motley Fool
Free Article Join Over 1 Million Premium Members And Get More In-Depth Stock Guidance and Research
By Luis Sanchez CFA – Feb 5, 2020 at 8:11AM

The rapid growth in the esports industry has been a popular topic among both gamers and investors. The raw numbers make it easy to see why: About 450 million people participated in esports in 2019 as competitors or spectators, according to research firm Newzoo. That audience will rise to 557 million by 2021.

With that large a market, surely there are many ways to monetize the industry, including advertising, merchandise deals, and increased video game sales. Activision Blizzard (ATVI 0.86%) clearly sees the opportunity in esports and has been leading the charge with several interesting investments. 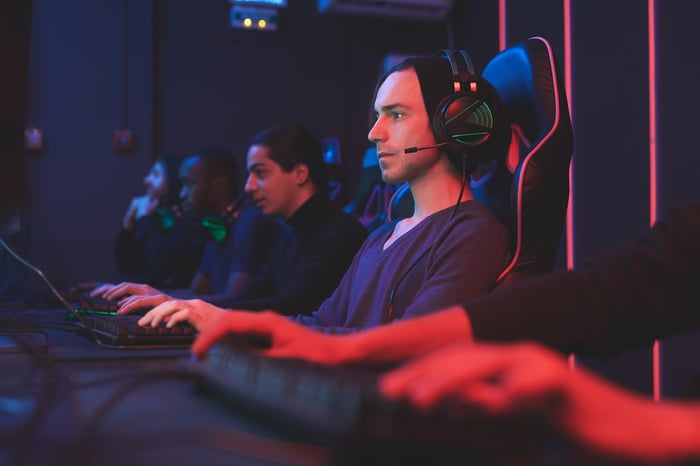 Activision Blizzard made its first major push into esports when it formed a media division in late 2015. The company owns many popular franchises, including StarCraft, Overwatch, and Call of Duty. And informal online communities have been hosting competitive tournaments and streaming highly-anticipated matches on platforms like Twitch (owned by Amazon) for years.

Activision appointed Steve Bornstein, a former CEO at ESPN, to lead the new media division. Mike Sepso, an esports industry pioneer, also joined the effort. In 2016, Activision took its commitment to building a broadcasting business around esports one step further by acquiring Major League Gaming (MLG), a leading online broadcaster in the field. With the MLG acquisition, Activision Blizzard now has the technological infrastructure to organize and broadcast major events.

MLG has already shown off its capabilities. For the 2019 Overwatch championship tournament, the company was able to fill the Barclays Center in Brooklyn with fans and broadcast some of the matches on traditional TV networks, including ESPN, Disney XD, and ABC (all owned by Disney), in addition to streaming on the MLG website.

Activision has an important advantage in developing esports as a game publisher. Owning the intellectual property behind the games gives the company flexibility in how to monetize the business.

After establishing its broadcasting abilities with the purchase and buildout of MLG, Activision has also begun to formalize league structures. The company started the Overwatch League in 2016 to capitalize on the title's large online multiplayer community.

The Overwatch League has dedicated franchises for major cities such as New York and San Francisco, and teams play home and away games. Activision originally sold the rights to 12 Overwatch team franchises before expanding the league to 20 teams.

Building off the success of Overwatch League, Activision is preparing a Call of Duty League and has already sold the rights for 12 teams. In total, Activision has already taken in an estimated $500 million from selling esports franchises.

Activision is well on its way to establishing itself as the "ESPN of esports," and it has likely just scratched the surface of the opportunity. Beyond its established efforts, the company has plenty of other popular titles that would work well as the basis of an esports league (StarCraft and Warcraft, for example).

The viewership for existing leagues is rising and may get a lot bigger. The season two finals of the Overwatch League saw the audience rise 30% from the prior season, and traditional networks are increasingly receptive to broadcasting esports.

The biggest benefit to Activision Blizzard and other game publishers is that esports create a more engaged gamer community, helping sell more games over a longer period of time while also boosting in-game spending. Tech companies that successfully adapt to esports have a bright future.