Please ensure Javascript is enabled for purposes of website accessibility
Log In Help Join The Motley Fool
Free Article Join Over 1 Million Premium Members And Get More In-Depth Stock Guidance and Research
By Rich Duprey – Feb 5, 2020 at 8:07AM

Some people apparently want everyone to think they work at Popeyes Louisiana Kitchen even though they really don't.

After the Restaurant Brands International (QSR -2.46%) fried chicken chain saw how much pop singer Beyonce's new clothing line resembled Popeye's uniforms, it developed its own line of clothes that it began selling from an online outfit called That Look From Popeyes. The clothes reportedly sold out in a day and the chicken joint said it would restock the apparel. 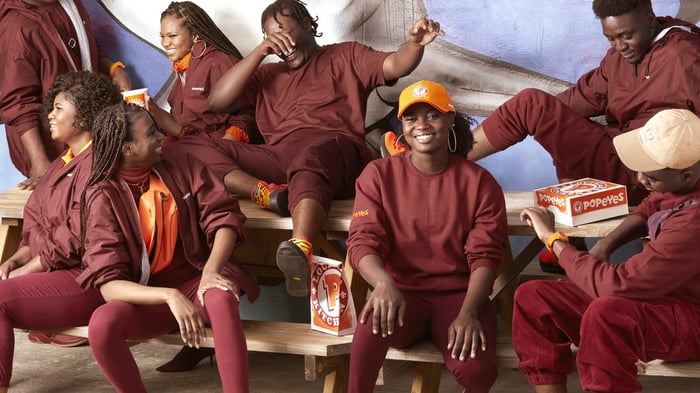 The restaurant's advertising agency GUT, which had helped the fried chicken chain develop its wildly popular fried chicken sandwich, reportedly saw the comments trending and approached the restaurant about capitalizing on it.

The Wall Street Journal said Popeyes immediately moved to make its clothes available to the public, marketing the line using Popeyes employees in promotional materials that resembled the Ivy Park style. Popeyes says all proceeds from sales of the clothing will go to charity.

Beyonce has had a long-term relationship with the Popeyes chain. She told Oprah Winfrey back in 2003 that she had a lifetime membership card for the restaurant chain that allows her to get as much free chicken as she wants whenever she visits a Popeyes. She said at the time, though, she was too embarrassed to have ever used it.