Please ensure Javascript is enabled for purposes of website accessibility
Log In Help Join The Motley Fool
Free Article Join Over 1 Million Premium Members And Get More In-Depth Stock Guidance and Research
By Will Healy – Feb 5, 2020 at 8:19AM

Despite a post-earnings drop, AMD stock will likely see more gains ahead.

Advanced Micro Devices (AMD -13.87%) stock has surged by more than 110% over the last 12 months, as of this writing, as the company continues to win business and grow revenue.

Guidance that came in slightly lower than what analysts were expecting helped send the stock down 6% after the recent fourth-quarter earnings report. CEO Lisa Su blame slowing sales of GPUs as consumers await the release of the next generation of gaming consoles. Since the new releases will begin in July, this likely amounts to delayed more than lost revenue. Rather than signaling that the rally has ended, the sell-off is more than likely a hiccup in a stock surge set to continue.

In the just-reported quarter, AMD beat earnings estimates by $0.01 per share, as the company reported $0.32 per share in quarterly profits. It also reported a 50% year-over-year increase in revenue and came in $20 million ahead of Wall Street's revenue expectations.

As of now, the forward P/E measured with 2021 earnings estimates stands at 30.9. Taken by itself, that may appear high. However, this is lower than chipmaker NVIDIA (NASDAQ: NVDA), which trades at around 33 times earnings estimates. But AMD stock remains more expensive than that of longtime rival Intel (NASDAQ: INTC), which sports a forward P/E ratio of about 13.75.

Still, when looking at expected profit increases, Intel may appear less appealing. Analyst estimates compiled by Yahoo! Finance predict that Intel will grow earnings by an average of 9.06% per year over the next five years.

This pales in comparison to the five-year estimate for AMD, which is at 36.29%. Analysts also see a profit increase of 79.7% for the current year for AMD, whereas the current-year estimate for Intel is around 3%. With this expected growth, AMD's price-to-earnings-to-growth (PEG) ratio comes in at just over 1.13, according to Yahoo! Finance, when comparing the forward P/E ratio to the five-year growth rate.Considering the massive profit growth expected in the near future, this seems like a reasonable PEG ratio. 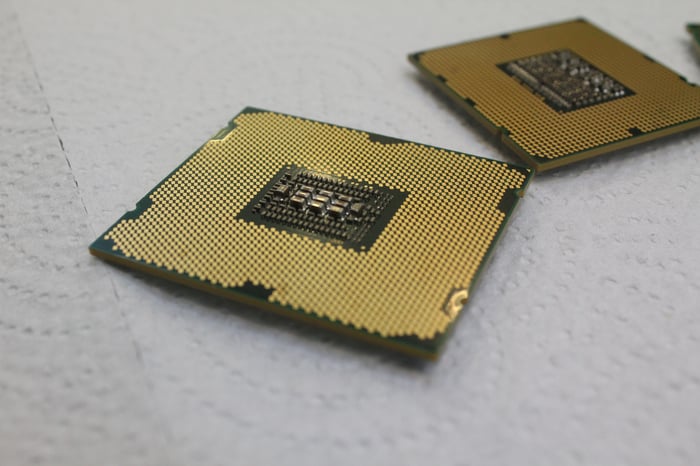 Despite the stellar numbers in its earning report, AMD stock declined by almost 6% following the release of results. The company reported that it expects $1.8 billion in revenue in the first quarter. Since analysts were aiming for $1.86 billion, some investors sold. However, the company's estimate represents 42% revenue growth from the year-ago level.

AMD has spent most of its history playing "little brother" to Intel. One of the few ways AMD still lags Intel now favors its investors.

For the upcoming quarter, analysts forecast revenue of $19.02 billion for Intel. While that would mean 18.4% revenue growth, it's still less than half of the expected growth rate of AMD's revenue. AMD is starting from a smaller base, so it's easier to see big jumps in its revenue.

AMD grew into one of the better-performing tech stocks over the last five years. Despite a run-up from a 2015 low of $1.65 to the roughly $48 per share price of today, AMD remains about one-fifth of the current size of Intel. AMD's market cap stands at around $56 billion versus about $278 billion for Intel. There is room to grow.

As AMD stock fell below $2 per share, many had left it for dead as it struggled to find its way following the end of the PC era.

Under Su's leadership, AMD became a viable alternative to what looked like NVIDIA's continued dominance in graphics chips. Moreover, it has taken a significant technological lead over Intel in the CPU race. At CES, AMD introduced the 7nm Ryzen 4000 chip. This means yet another 7nm offering at a time when Intel only produces 10nm chips. Smaller transistors tend to offer faster processing and higher power efficiency. AMD has the potential to not only catch but possibly surpass Intel.

The company signed some crucial contracts in 2019. Among its victories was winning the contract to power Sony's (NYSE: SNE) upcoming release of the PS5 gaming console. Microsoft (NASDAQ: MSFT) will also use AMD chips in its Xbox console. AMD also won a deal, along with Cray, a subsidiary of Hewlett Packard Enterprise (NYSE: HPE), to power the world's fastest supercomputer, which is expected to bring in more than $600 million.

Despite a substantial move higher over the last five years, AMD stock still looks like a bargain from a PEG perspective. Moreover, its size compared to Intel implies the company could continue its growth. Furthermore, under Su's leadership, AMD has not only caught its rivals technologically, in many cases, it has surpassed them.

A slightly lower revenue forecast led to some selling of the stock. However, revenue should look up once Microsoft and Sony release their new gaming consoles. Rather than running away, investors should see this as an opportunity to buy into this juggernaut at a slightly lower price.

Why Chip Stocks Were Falling Today