Investors worried about a slowdown in revenue as biosimilars are rivals to older drugs.

Shares of Amgen (AMGN -0.30%) fell 10.4% in January, according to data provided by S&P Global Market Intelligence, after the stock rose 24% last year and reached an all-time high in December.

This isn't simply a case of locking in profits. Investors may be concerned about a slowdown at the biotech giant as older drugs lose patent protection. In the third-quarter presentation in October, Amgen reported declines in sales of bone marrow stimulants Neulasta and Neupogen, citing biosimilar competition. Both drugs help the body make white blood cells after cancer treatments.

Biosimilars are highly similar to an already approved biological treatment. Sales of Neulasta fell 32% in the quarter to $711 million, while Neupogen declined 36% to $54 million. Just a year earlier, quarterly revenue of Neulasta topped $1 billion. 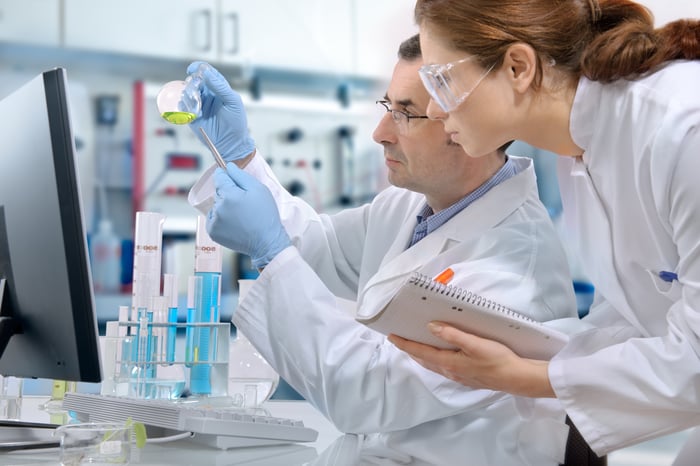 While brighter news such as a 10% increase in the 2020 first-quarter dividend and a Food and Drug Administration approval for Amgen's fourth biosimilar buoyed the shares late last year, as fourth-quarter and full-year earnings approached, some investors decided to lock in profits in anticipation of a further slowdown in the company's older products.

Biotechs such as Amgen that have been around for years and have stellar revenue and profit thanks to blockbuster drugs are seeing many of those older drugs come off patent. That opens the door to competition, which weighs on profits from the original drug. Investors could count on Amgen, with more than 20 marketed products and annual sales topping $22 billion for the past four years.

Future growth at Amgen will depend its ability to replace yesterday's blockbuster with newer drugs, and whether it can introduce biosimilars to other successful drugs. And the need to expand through partnerships is also important.

In its fourth-quarter earnings report, the company gave an update on AMG 510, its investigational cancer treatment. Data from a potentially pivotal Phase 2 monotherapy study in advanced non-small cell lung cancer is expected this year.

Amgen recently submitted a biologics license application to the FDA for a biosimilar version of Rituxan, Biogen's (BIIB 0.41%) and Genentech's cancer drug. And it just recently began its collaboration with BeiGene (BGNE 1.77%) to increase its oncology presence in China. Will it be enough to lift shares meaningfully? We might have to wait for Amgen's next earnings report to find out.