Please ensure Javascript is enabled for purposes of website accessibility
Log In Help Join The Motley Fool
Free Article Join Over 1 Million Premium Members And Get More In-Depth Stock Guidance and Research
By Brian Stoffel – Feb 6, 2020 at 8:35AM

It goes much deeper than the rollout of New Relic One.

For a while, New Relic (NEWR -2.25%) seemed like a market darling that could do no wrong. Between February 2016 and July 2018, shares increased fivefold! But it hasn't been the same since -- and this week's earnings release won't help one bit.

The software-as-a-service (SaaS) company provides a platform for companies to monitor their digital services. As you might expect, such a service is becoming enormously important, but that makes New Relic's recent flounders all the more disappointing.

Let's dig into the three big reasons the stock currently sits over 40% below those all-time highs. 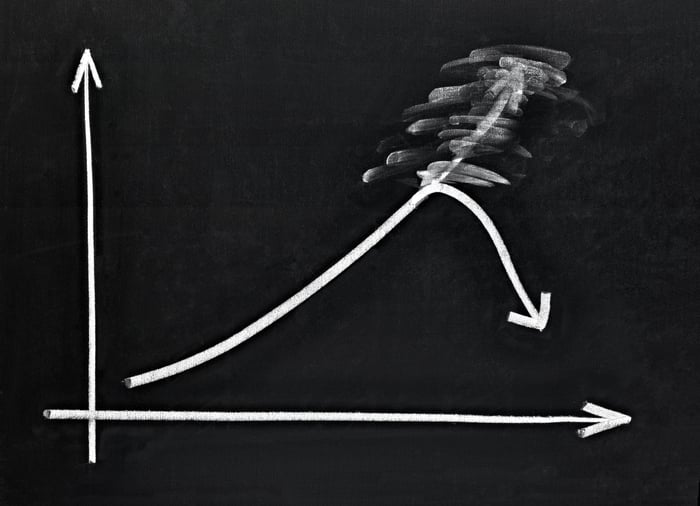 Before we get into the weeds, though, let's see how the company performed in its recent earnings. Here's the view from 30,000 feet.

There's actually a lot to not like about the numbers above. Normally, when a SaaS company is hitting its stride, earnings and free-cash-flow growth far outpace sales growth. That's the beauty of the SaaS model. And given that New Relic has been around for over a decade, investors can be excused for thinking the company should be at that point.

Unfortunately, that's not the case. The main culprit in falling profit and cash flow: While revenue grew 23%, operational expenses were up far more -- 34%, to be exact.

If you believe the story offered by management, the main reason for this slowdown is the rollout of New Relic One -- the company's platform that aggregates all of the different tools customers can use to monitor their digital health.

It's fine for a company to underestimate the logistical difficulty in selling a new platform. And course-correcting is also necessary, as is clear from the slate of new executives joining the company over the past few months.

But what's concerning is that even after guiding expectations down once these rollout issues surfaced, the company continues to come in below its expectations. Case in point: During the conference call, management lowered guidance for cash from operations. And it wasn't minor -- the mid-point dipped 27% to $69.5 million!

One revision is fine, but management should have a handle on how things are going -- or it shouldn't offer specific guidance at all. And a revision this large is a red flag.

When New Relic held its investor day in late 2019, it broke out the three broad categories under which its clients fall: large, mid-tier, and growth. All are determined by the amount of annual recurring revenue (ARR) they pay.

During the conference call, CFO Mark Sachleben admitted that a large customer had "right-sized" its ARR -- which is Wall Streetese for saying they decided to use less of New Relic's software. This was partially reflected in the company's dollar-based net retention (DBNR) falling to 109%.

This DBNR metric -- which tells investors how much more (or less) existing customers spend year after year -- has been falling for a while. Because it filters out the effect of new customers, it speaks to whether or not a company has staying power. 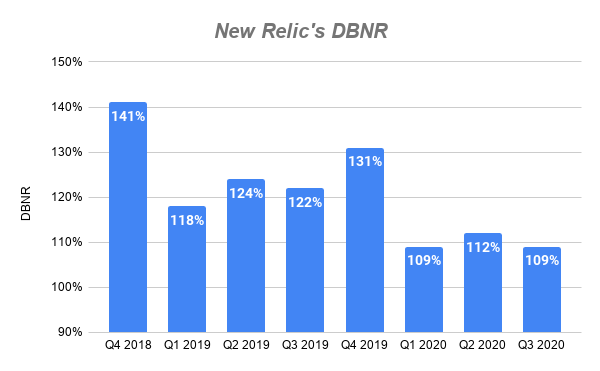 While it's certainly still a good sign that DBNR is above 100%, a slowdown like this could indicate a few things. Sure, that one large customer reduced its spending, but I have to wonder if the churn rate of those mid-tier customers has nudged up. Deferred revenue (read: revenue that's been collected but not yet recognized) grew just 13% in the quarter -- another sign of a slowdown.

We can't know for sure if customers are leaving or just adding fewer tools, but the company's guidance (below) doesn't engender much confidence.

Perhaps management is just trying to apply the lessons it has learned over the past year. It's better to under-promise and over-deliver. That said, the outlook for the next quarter is not rosy.

Management believes revenue growth will slow all the way to 17% to 18% growth, while non-GAAP earnings are expected to fall almost 70%! For a once-high-flying growth stock, this is a pretty quick reversal.

At this point, an investment in New Relic is a bet that CEO and founder Lew Cirne can turn things around. If he shows that he's learned from the slow New Relic One rollout, and that he really does have a best-in-class product, the days of growth may soon return.

If they don't, it's entirely possible one of two broad shifts are occurring: The competition has built a better solution, or companies are simply choosing to use one SaaS company for as many of their needs as possible. Since New Relic is largely focused only on monitoring, it doesn't have as large of an umbrella.

Personally, I don't know enough to say that New Relic is doomed. At the same time, I'm glad I long ago sold my shares. As such, I'm not willing to make a decision either way (outperform or underperform) in my CAPS profile. Time will tell how this plays out. But for now, the market is not impressed.