Please ensure Javascript is enabled for purposes of website accessibility
Log In Help Join The Motley Fool
Free Article Join Over 1 Million Premium Members And Get More In-Depth Stock Guidance and Research
By Rich Duprey - Feb 6, 2020 at 10:36AM

And it's one that serves a dual purpose for the alcoholic beverage company.

Even though Constellation Brands (STZ 0.61%) is about to launch its own seltzer under the popular Mexican beer banner Corona, the adult beverage distributor just took a minority stake in another hard seltzer brand, Press Premium Alcohol Seltzer.

Although terms of the investment were not disclosed, the transaction is part of Constellation's broader commitment to support businesses run by women through its Focus on Female Founders program. 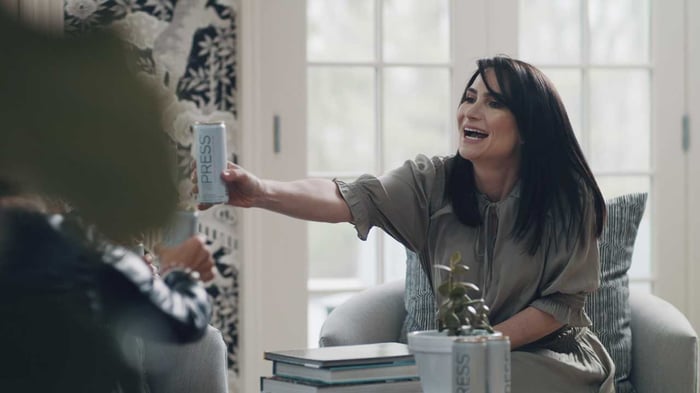 Constellation's primary focus will obviously still be on its own Corona offering since it's backing that launch with a $40 million marketing campaign. But the investment in Press achieves two goals at the same time: It furthers its promise to invest $100 million by 2028 in businesses owned by women, and it gives the company yet another way of tapping into what looks like a major growth opportunity.

Sales of hard seltzer hit $2.5 billion in 2019 as consumers make a seismic shift toward healthier drinks. The category now accounts for 5% of the beer market and 5.4% of the industry's dollar sales.

Industry leader White Claw, from Mark Anthony Brands (the maker of Mike's Hard Lemonade), accounts for more than half the market, and it said it expected revenue to hit $1.5 billion last year. Boston Beer represents almost another third of the hard seltzer market and is estimated to produce more of its Truly brand than it does of its flagship Samuel Adams beer.

Together with Bon & Viv from Anheuser-Busch InBev, the three account for over 90% of hard seltzer sales, and the megabrewer now has three separate brands on the market to appeal to a variety of price points.

Constellation launched its start-up program to support women in the alcoholic beverage industry and adjacent categories through its Constellation Ventures venture capital arm.

So far, Ventures' Female Founders program has invested in five businesses: cocktail maker Austin Cocktails, hard soda start-up Vivify, the craft distilleries Montanya Distillers and Durham Distillery, and now Press. It has also reinvested in Catoctin Creek, another craft distillery based in Virginia that Constellation had invested in before starting the program.

Although still small, Press gives Constellation a piece of a growing hard seltzer brand that is reportedly one of the 10 biggest brands, one that should have a presence in 48 states by the end of the month. It targets the low-alcohol segment of the market with seltzers containing 4% alcohol by volume (ABV).

Both White Claw and Truly have 5% ABV, and some producers are coming out with high-ABV versions, such as Four Loko, with 14% ABV. Constellation's own Corona Hard Seltzer will have 4.5% ABV.

More seltzer can help Constellation Brands offset some of the weakness in its wine and spirits business as it transitions to a premium-focused portfolio. Its fourth-quarter earnings report showed the segment suffered a 9% decline in organic sales, in contrast to the robust growth witnessed in beer, where the Corona and Modelo families of Mexican beer have tapped into one of the few remaining growth segments of the market.

With hard seltzer making up a greater portion of beer production, even the relatively small contribution Press will provide to Constellation Brands can help, while increasing the visibility of women in the alcoholic beverage industry.