GasLog offered mixed comments on the state of the market, announced major impairment charges, and slashed its distribution.

The global market for liquefied natural gas (LNG) grew 11% on a volume basis from 2018 to 2019, but operators of LNG carriers are still struggling to profit from the opportunity.

Investors were spooked by the full-year 2019 earnings report for GasLog (NYSE: GLOG). The business generated record annual revenue last year, but was weighed down by high financing expenses and large impairment costs. As a result, the operator of LNG carriers is focusing on strengthening its balance sheet in 2020. It will begin by slashing its quarterly distribution from $0.561 per unit to just $0.125 per unit. 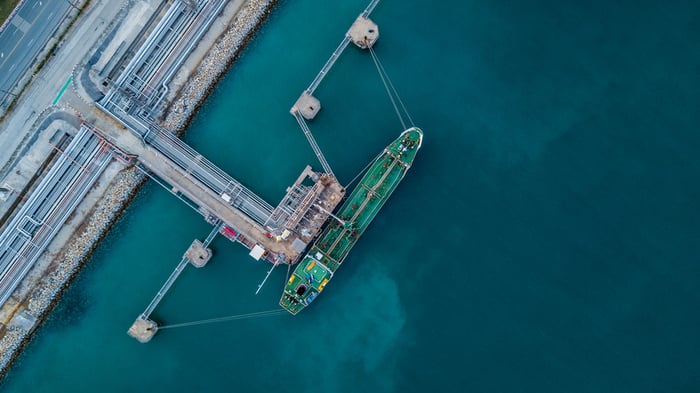 Natural gas can be exported in two ways: through a pipeline or within the supercooled confines of special marine tankers. The latter is rife with obstacles.

It takes years and tens of millions of dollars to build a new cargo vessel of any variety, including a new LNG carrier. That has historically resulted in poorly matched supply and demand and downright awful balance sheets in the shipping industry. Shippers tend to commit to build too many vessels based on today's demand projections, only to wallow in low daily charter rates when tomorrow's reality doesn't line up with those projections. Worse, in an effort to balance the supply of vessels, shippers often have to write off aging vessels before they're truly ready to retire.

All of that is happening in the LNG carrier market. While GasLog generated record annual revenue of $668 million and healthy operating income of $123 million in 2019, it reported a net loss of $115 million for the year. The loss was driven by $162 million in impairment charges and $190 million in financing expenses.

GasLog wrote off all six of its steam-powered vessels, five of which are owned by GasLog Partners, after daily charter rates failed to develop as expected. The smaller steam vessels were only built in 2006 and 2007, but were increasingly less competitive than the larger LNG carriers now entering service across the industry. Case in point: GasLog is expecting to receive seven new LNG carriers in 2020 and 2021.

The impairment, coupled with sharply reduced distribution payments in 2020, should help GasLog and GasLog Partners strengthen their balance sheets. The partnership stated that it would save $84 million in distributions this year and divert the cash flow to debt repayment. It's a move that's probably long overdue, but it certainly degrades the main reason to own a master limited partnership -- the ability to collect a high yield.

Meanwhile, investors are assuming that the sour news from GasLog and its partnership means Golar LNG will also be negatively impacted by market headwinds. Golar LNG reported a net loss of $236 million in the first nine months of 2019. It, too, appears to be well positioned to capitalize on a growing LNG market based on its technical know-how and capabilities, but financing issues and poor operating metrics always seem to weigh on the company's potential.

On one hand, writing off noncompetitive vessels at the end of 2019 should clear the way for smoother operations and a healthier balance sheet for GasLog and GasLog Partners. The duo will soon have a relatively young fleet of LNG carriers operating in a competitive and quickly growing market. On the other hand, investors are probably at least a little fed up with the constant financial shuffling of shippers. These big shocks seem to happen every so many years. Therefore, investors might find LNG exporters to be a better entry into the LNG market, although they face their own unique set of obstacles.