Please ensure Javascript is enabled for purposes of website accessibility
Log In Help Join The Motley Fool
Free Article Join Over 1 Million Premium Members And Get More In-Depth Stock Guidance and Research
By Neha Chamaria – Feb 6, 2020 at 8:30AM

Duke Energy missed the recent rally in utility stocks. Should investors take advantage of the opportunity and buy the stock now?

Hot isn't a word you'd even remotely associate with utility stocks, but what if Duke Energy (DUK 1.25%) is the hot investment you've been ignoring all along? Duke's lackluster performance in the past year or so compared with rivals such as Dominion Energy (D 1.14%) has miffed investors, but so far this year, the stock has mirrored the performance of the Dow Jones Utility Index, which is holding up firmly. Could that mean Duke Energy is a top utility stock buy now, at a time when the rally in most utility stocks has triggered valuation concerns?

While there are several factors to consider before buying a stock, it boils down to these three for utility stocks in my opinion: the company's operational growth prospects, the dividend, and the stock's valuation.

For a traditional utility like Duke Energy, earnings growth comes primarily from increases in the rates of services that depend a great deal on the amount of money the company spends on infrastructure, particularly if it's a regulated utility. A regulated utility owns all power generation, transmission, and distribution lines, and therefore enjoys a monopoly, in a particular region. The rates for electricity and gas for such regulated utilities, however, are decided by the state public utility commissions. Companies that regularly invest to expand and modernize infrastructure while improving energy efficiency are better positioned to win timely rate approvals from state regulators. 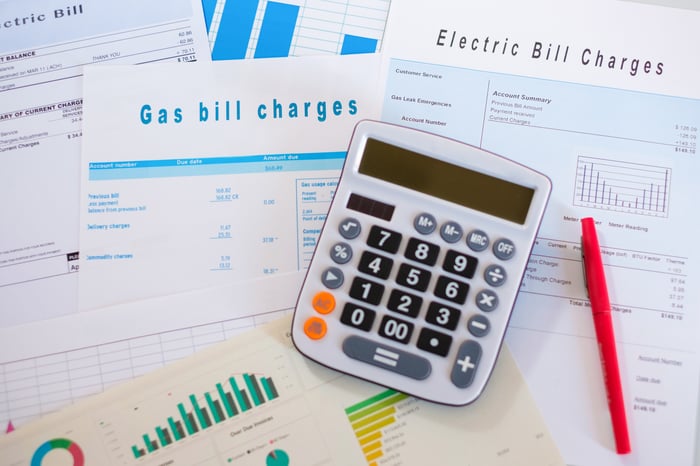 But how does a utility make more money when regulators fix rates? The thing is, the rates are such that they cover a utility's costs as well as allow a reasonable return on equity. So, for example, Duke has requested a return on equity of 10.3% in the Carolinas in its latest rate case filings. If approved, the rates should be effective from the third quarter of 2020.

So far, Duke has managed to win meaningful base rate approvals. During the nine months ended Sept. 30, Duke's GAAP earnings per share (diluted) jumped to $4.18 from $3.11. The company's capital and investments expenditures increased 20% to roughly $8.4 billion during the period, nearly three-quarter of which was invested in electric utilities and infrastructure. Management even upped its outlook for financial year 2019, narrowing its adjusted earnings guidance to $4.95-$5.15 a share. That's minimum 5% growth from 2018.

The good news is that between 2019 and 2023, Duke aims to invest $37 billion to drive 4%-6% growth in adjusted EPS. On the flip side, all of that upcoming earnings growth may not benefit existing shareholders as much, thanks to equity dilution.

Aggression: Missing where it's needed

Much of the growth in Duke Energy's natural gas business depends on the 600-mile interstate Atlantic Coast Pipeline (ACP), a joint venture, with Duke owning 47%, Dominion Energy 48%, and The Southern Company the remaining.

Several setbacks have delayed ACP and jacked up costs. Duke investors were caught off guard when during its Q3 earnings release, the company announced a further delay and said it doesn't expect any revenue off the pipeline until early to-mid 2022. Worse yet, with the total minimum estimated cost of the project -- corroborated by Dominion Energy -- going up to $7.3 billion-$7.8 billion, Duke's management plans to issue equity worth $2.5 billion this year to fund the project. That'll dilute existing shareholder wealth.

While Dominion has been issuing equity too, Duke has a heavier debt load to take care of. 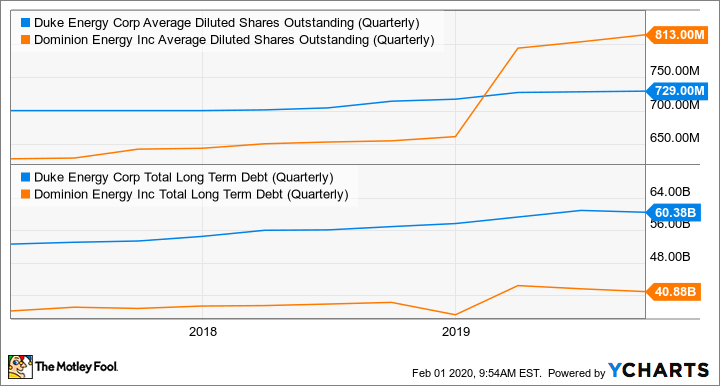 Then there's Duke's slow approach to clean energy that's put investors off. Competition in a regulated electricity market, if any, is primarily from producers of alternative energy that could encourage customers to switch. It's not surprising, then, that utilities are betting big on renewables. Duke hasn't been as aggressive on this front, though, and still relies heavily on coal for power generation.

For a better perspective, here's a breakdown of how much different fuel types contributed to Duke's and Dominion's total electricity generation in 2018.

Realizing It was only late last year that Duke announced plans to cut carbon emissions by 50% by 2030, similar to Dominion Energy's goals. By 2030, Duke expects natural gas to be the largest contributor at 41% and for coal's share to fall to 15%. But with Dominion setting out concrete future plans such as the largest offshore wind farm in the country, investors expect more from Duke Energy on the clean energy front.

There are better utility stocks to buy now

Duke has increased dividends every year for decades, but it raised it by a meager 2% last July. Now Dominion offered a similar increase to its shareholders but its yield is also higher than Duke's 3.9%. With the debt and equity overhang valid concerns and Duke shares already trading at a price-to-earnings ratio close to its five-year average of around 21, there might be better utility stocks out there to buy now.