Please ensure Javascript is enabled for purposes of website accessibility
Log In Help Join The Motley Fool
Free Article Join Over 1 Million Premium Members And Get More In-Depth Stock Guidance and Research
By Rich Smith - Feb 6, 2020 at 11:41AM

Sales miss, margins slip, and capital spending is expensive -- so workers get skewered.

Meats-producer Tyson Foods (TSN -0.23%) reported adjusted first quarter 2020 earnings per share of $1.66 this morning, and Q1 sales of $10.8 billion. Noel White, Tyson Foods' CEO, noted that these "overall results in the first quarter of fiscal 2020 were in line with expectations," and said he is "optimistic about fiscal 2020" as a whole . 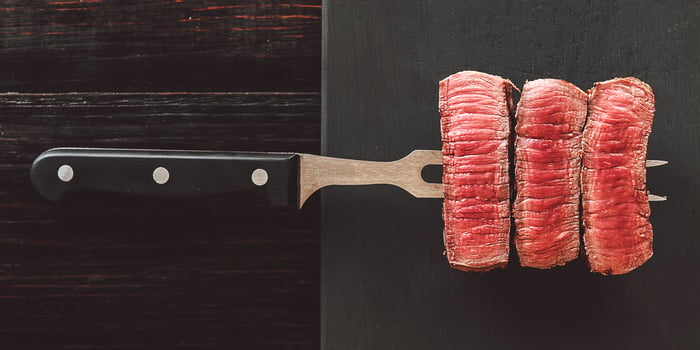 One easy explanation is the fact that -- however the CEO feels about his company's quarter -- Wall Street isn't especially pleased about it. Sales of $10.8 billion, which produces such well-known brands as Jimmy Dean and Hillshire Farm in addition to its own namesake Tyson, were up 6.1% in comparison with Q1 2019, but Wall Street analysts had hoped Tyson would report even better growth -- and more than $11 billion in sales.

At the same time, Tyson's earnings may have beaten estimates -- but they were nothing to write home about. Net income for the company rose a bare 1.3% year over year to $1.52 per share. And even the number that Tyson (and Wall Street) emphasized, "adjusted net income per share attributable to Tyson" (a very non-GAAP number), grew barely 5.1% -- slower than revenue growth, and indicative of weakening profit margins at the meat-maker.

Tyson is also continuing to spend heavily on capital investment this year, with capital expenditures expected to be approximately $1.3 billion in 2020, up from $1.26 billion last year -- and nearly twice the $695 million Tyson as spending as recently as 2016, according to data from S&P Global Market Intelligence. That money's got to come from somewhere. Tyson, it seems, has decided to take it out of payroll.