Here's the good and the bad from Peloton's second-quarter earnings.

Shares of Peloton Interactive (PTON 0.00%), a large interactive fitness platform with over 2 million members, declined over 11% Thursday as the market absorbed the company's second-quarter fiscal 2020 results and guidance.

Peloton's second-quarter revenue jumped 77% from the prior quarter to $466.3 million, easily topping analysts' estimates calling for $423 million. The company posted a loss of $0.20 per share, which was still better than the $0.35-per-share loss analysts had expected. Despite topping analysts' estimates on the top and bottom line, Peloton's report included a couple of negative metrics. First, even though top-line growth was impressive at 77% compared to the prior year, it was slower than what the company saw in its first quarter of fiscal 2020 -- over 100% year-over-year growth. Second, slightly adding to growth deceleration concerns, management projects third-quarter revenue to be $470 million to $480 million, below analysts' estimates calling for $494 million. 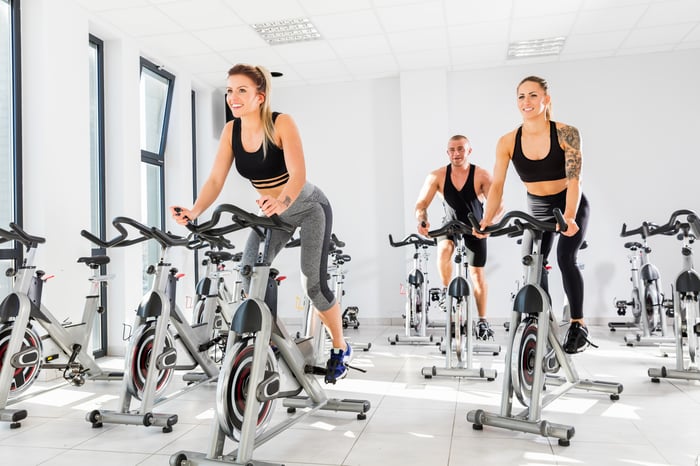 Despite Peloton's stock price decline Thursday, especially considering the estimate beats, the company had other positive figures to offer investors. The company experienced low Average Net Monthly Connected Fitness (NMCF) Churn of only 0.74%, well below estimates of 1.03% churn. Gross margin also checked in at 42.3% compared to company guidance of 39% to 40%. Connected fitness subscribers increased 96% to 712,005, and total members topped 2 million. Peloton also noticed an uptick in engagement as second-quarter monthly workouts per connected fitness subscriber were 12.6, compared to the prior year's 9.7 workouts.

As with most unprofitable stocks, the potential is in the eye of the beholder. On one hand, growth is contributing to higher cash burn, but it's clear the company is growing its user base and improving engagement at a satisfying rate. Peloton stock could remain skittish at any sign of revenue slowing, and management will need to prove it has a path to profitability. However, if you're a long-term investor who believes in the growth story, and increasing consumer engagement, take these daily price swings with a grain of salt. If you can't keep a long-term horizon for volatile companies in the early stages, such as Peloton, there are plenty of great companies to learn about.