Please ensure Javascript is enabled for purposes of website accessibility
Log In Help Join The Motley Fool
Free Article Join Over 1 Million Premium Members And Get More In-Depth Stock Guidance and Research
By Leo Sun – Feb 7, 2020 at 8:09AM

Yet Momo's stock still looks cheap relative to its growth. Wall Street expects Momo's revenue and earnings to rise 32% and 27%, respectively, this year -- but its stock trades at less than 10 times forward earnings. I recently noted that Momo's valuation was "too cheap to ignore," but investors should still recognize the three biggest threats to its growth if they plan to buy the stock.

Back in 2014, China's state-backed media slammed Momo as a "hormone-filled" app which was often used for prostitution. Momo weathered the storm, but China's crackdown on hundreds of live video apps for "offensive" content in 2018 raised questions about the future of its live streaming business, which still generates the lion's share of its revenue by letting viewers buy virtual gifts for broadcasters.

Momo's video platform also survived that purge, but Tantan was temporarily booted from China's app stores last year amid allegations of inappropriate ads. Momo also voluntarily suspended news feed posts on both apps for an internal review. Momo never disclosed the nature of those ads, but several reports claimed that prostitution ads were circumventing its filters.

Momo's suspension of news feed posts on both apps ended last June, and Tantan returned to app stores in July. However, the threat of another crackdown still casts storm clouds over Momo's long-term future. 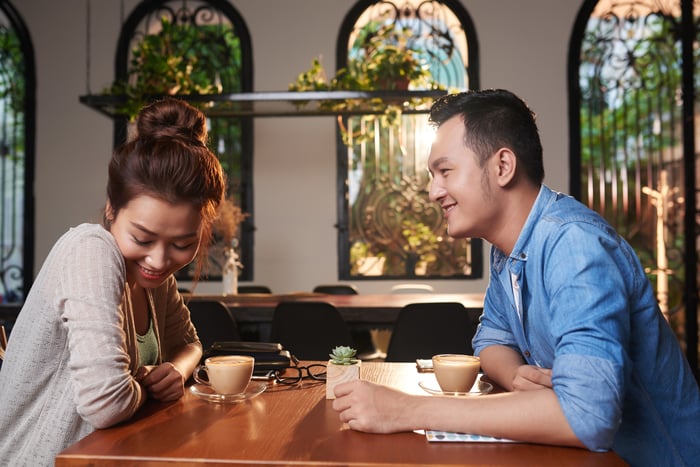 WeChat's ubiquitous nature makes it an ideal platform for forging social connections. It's not officially a dating app, but it's commonly used as one among young adults in China.

But that's not all. Tencent also recently launched the anonymous video dating app Maohu ("Catcall"), with lets users don virtual masks while chatting, and a Tinder-like app called Qingliao ("Light Chat") and relaunched its Pengyou ("Friends") app as a social network with an opt-in dating feature. Those moves all suggest that Tencent wants to chase Momo into the dating market to offset WeChat's slowing growth.

Momo still enjoys a first mover's advantage in the online dating market, but Tencent could keep tossing new dating apps at Momo until one of them finally cracks the market leader's shell.

Momo and Tantan both need to gain Gen Z users to keep growing, but many of those younger users are gravitating toward short video apps like ByteDance's TikTok and JOYY's (YY 0.90%) Likee, which reach over 500 million and 100 million MAUs worldwide, respectively.

TikTok (known as Douyin in China) was the fourth most downloaded app worldwide last year, according to App Annie, and Likee ranked seventh. Neither Momo nor Tantan cracked the top 10 since both apps lack TikTok and Likee's overseas presence.

TikTok and Likee aren't built as dating apps, but their social features allow users to connect with each other -- which could cut Momo and Tantan out of the loop. It would also be fairly easy for both apps to add opt-in online dating features to users' profiles.

Momo remains the top online dating company in China, and its stock is cheap if it meets Wall Street's expectations next year. However, investors should do their homework and realize that intense government crackdowns or competition from rival platforms could still unexpectedly derail its growth.