A long-running feud between the two execs ends with CEO Tidjane Thiam out of a job.

Credit Suisse Group (CS 2.63%) CEO Tidjane Thiam is headed for the exit after a prolonged power struggle that pitted him -- and some large U.S. investors -- against Chairman Urs Rohner. His ouster removes a major source of uncertainty that has hovered over the banking giant for nearly a year, but raises new questions about its future.

Thiam and Rohner have been at odds over the bank's spying on Iqbal Khan, formerly its head of international wealth management. After Khan -- who had his own clashes with Thiam -- moved to archrival UBS Group, Credit Suisse (at the instigation of COO Pierre-Olivier Bouee) hired detectives to follow Khan and make sure he didn't poach other top talent to join him at his new employer. 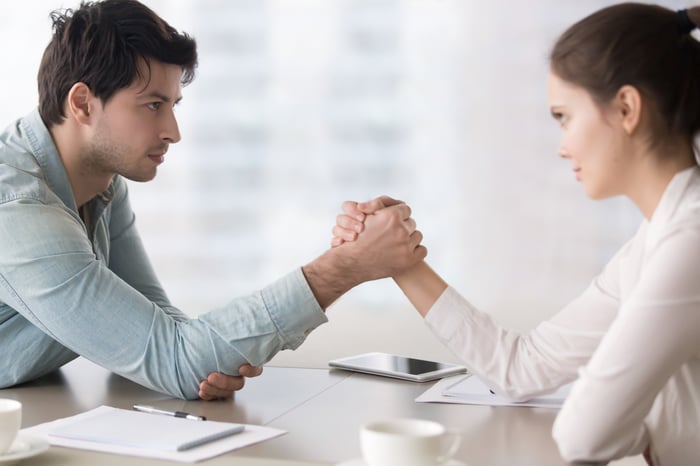 An investigation cleared Thiam of involvement, but the scandal did not go away. Rohner and other directors worried that the headlines had damaged the bank's reputation in Switzerland, which still accounts for nearly 40% of Credit Suisse's income. Thiam will be replaced by Thomas Gottstein, a 20-year bank veteran who will its first Swiss-born CEO in nearly two decades.

But Thiam's ouster was not universally applauded. Two of the bank's largest shareholders, 8.42% holder Harris Associates, and 3.26% holder Silchester International Investors, reportedly had urged Rohner to either back Thiam or resign.

Gottstein is stepping into a difficult situation. The new CEO will need to both heal internal wounds at the bank following the high-profile power struggle, and figure out how to reverse its 40% share price decline over the past five years.

Nor are the investors loyal to Thiam likely to fade into the background. David Herro, Harris Associates' deputy chairman, told Bloomberg TV on Friday that while he believes Gottstein is "talented," the bank still has "a chairman who is less capable and talented and a board who seems to just mimic, just follows blindly whatever he says."