Please ensure Javascript is enabled for purposes of website accessibility
Log In Help Join The Motley Fool
Free Article Join Over 1 Million Premium Members And Get More In-Depth Stock Guidance and Research
By Jeremy Bowman – Updated Feb 7, 2020 at 8:26AM

The ridesharing giant is sharpening its focus on profitability.

Uber Technologies (UBER 0.83%) just polished off its first year in the public markets, and the tone of the company is much different than the one it struck a year ago when it was preparing to go to public.

The leading U.S. ridesharing company has been chastened by its post-IPO slide, the generally rough reception it's had in the public markets, and the downfall of WeWork, a fellow Softbank alum whose collapse has caused investors to look more skeptically at profitless companies.

In its fourth-quarter earnings report, Uber's management wanted investors to know it heard this signal clearly. CEO Dara Khosrowshahi said, "We recognize that the era of growth at all costs is over. In a world where investors increasingly demand not just growth, but profitable growth, we are well-positioned to win through continuous innovation, excellent execution, and the unrivaled scale of our global platform."

CFO Nelson Chai echoed that tone, saying, "Our focus on disciplined capital allocation is part and parcel to achieving our financial goals, and the recent sale of our India Eats business further demonstrates that commitment."

Uber turned in another round of strong revenue growth as revenue rose 37% to $4.07 billion, edging out estimates at $4.06 billion.  Its Adjusted EBITDA loss narrowed by 25% to $615 million, due to strong growth in the Rides business. Rides adjusted EBITDA jumped by 231% to $742 million, which may be a sign that prices for rides are rising as price wars with Lyft and other competitors ease. Adjusted EBITDA in all of its other segments was negative. On the bottom line, it lost $0.64 per share, slightly better than expectations of -$0.67.

However, the big news in the earnings call was that Uber is accelerating its profitability goals. Just three months after the company pledged to be profitable on an adjusted EBITDA basis by the end of 2021, following in Lyft's footsteps, Uber pulled that goal forward a whole year. The company now believes it will be profitable by the fourth quarter of 2020. 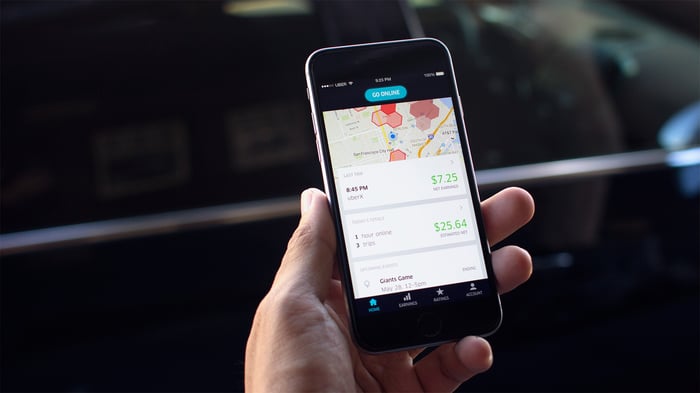 Under former CEO Travis Kalanick, Uber in many ways was a growth-at-all-costs company. Kalanick raised billions to fund Uber's expansion around the world, bullying rivals and regulators to build a dominant transportation brand. However, the combination of the backlash over a number of cultural and regulatory issues that led to the ouster of Kalanick and the more recent adjustment in the market following the WeWork collapse has led management to get sober about profitability.

Among the company's operating segments, Uber Eats has been the primary source of its losses, as that segment lost $461 million in the fourth quarter. To drive profitability, Uber plans to divest all of the Uber Eats business where it isn't No. 1 or No. 2 in the market and use that money to fund improvements in the markets in which it's most competitive. In the last few months it's sold its Eats business in India and South Korea.

For the full year 2020, the company expects an adjusted EBITDA loss of $1.25 billion to $1.45 billion, and management was careful to say that there was still significant work to be done to achieve profitability. The company also guided for 15% to 23% growth in bookings next year, and 26% to 34% growth in adjusted net revenue, which strips out costs like driver incentive and payments to restaurants, a sign that revenue growth will slow from the fourth quarter.

Overall, this was probably Uber's best earnings report in its short public history, and the market cheered the renewed effort to turn profitable. Shares were up double digit percentages at one point after hours on Thursday, and were trading up about 8% in pre-market trading Friday morning.

Getting out of the red won't be easy for Uber. But the company seems to be making the right decisions and effectively balancing top-line growth with the bottom-line goal.