The online education company set a positive tone for 2020.

Shares of 2U (TWOU -3.18%) were up more than 11% as of 3:25 p.m. EST Friday after the online education company reported quarterly results that were better than expected and set an optimistic tone for 2020. It still has a lot of work ahead but appears to be making progress with its previously announced business transition.

After markets closed Thursday, 2U reported a fourth-quarter loss of $0.18 per share on revenue of $163 million, beating analyst expectations for a $0.22 per share loss on sales of $164 million. The company said it expects to generate sales between $170 million and $180 million in the current quarter and between $725 million and $750 million for the full year 2020; consensus expectations are for $172.45 million and $729 million, respectively. 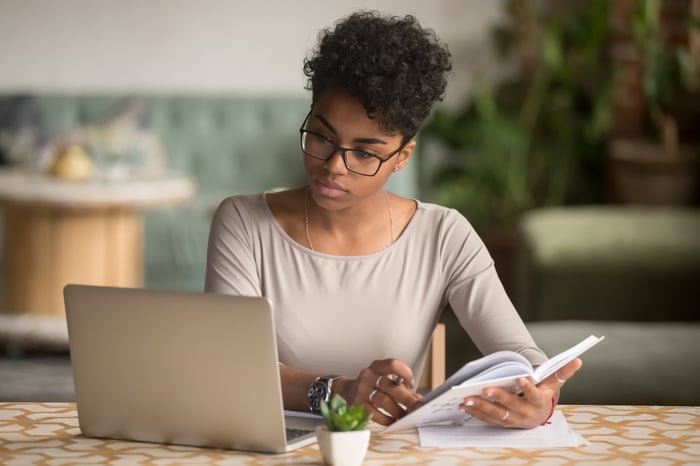 Shares of 2U have lost more than half their value in the past year. They were hit by an August announcement that the company was lowering its near-term growth expectations in order to focus on operational efficiency in response to a flood of new competition in the business of facilitating online learning. The announcement caused investors to question whether 2U is a long-term growth stock.

2U launched 15 new degree programs in the quarter, and said it achieved an 82% student retention rate in the segment.

2U still has a way to go, but in its forecast for 2020, the company said it expects full-year adjusted EBITDA to range from a loss of $5 million to a gain of $10 million. If the company can indeed cut its spending and turn EBITDA positive by year's end, it will be a fantastic accomplishment.

It has also been the subject of some sale rumors, but management declined comment during the post-earnings conference call with investors. CEO Christopher Paucek instead used the call as an opportunity to argue that 2U's prospects remain as bright as they were prior to the restructuring:

Our original belief remains as true as it was back in 2008. As more universities launched digital offerings, the value proposition of our partnership model is stronger than ever. 2U is uniquely positioned to capitalize on this powerful secular tailwind based on our 11-year track record of successfully working with university partners.