Please ensure Javascript is enabled for purposes of website accessibility
Log In Help Join The Motley Fool
Free Article Join Over 1 Million Premium Members And Get More In-Depth Stock Guidance and Research
By Keith Speights - Feb 9, 2020 at 9:31AM

And one key reason to go with Align instead.

But it's a different story in 2020 so far. SmileDirectClub's shares have racked up huge year-to-date gains while Align Technology stock has fallen. With its newfound momentum, is SmileDirectClub a better stock to buy than Align now? There are three reasons that the answer could be a resounding "yes" -- and one key reason investors could see Align as the better pick. 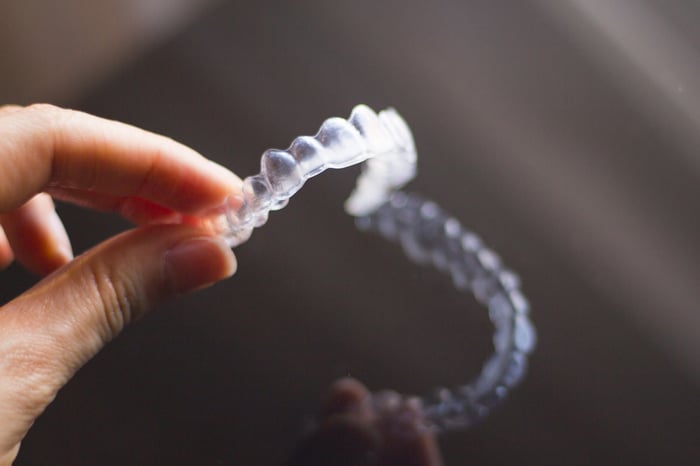 Align Technology reported year-over-year revenue growth of nearly 22% for the fourth quarter of 2019. That's not bad at all and beat Wall Street expectations. But it's a far cry from the 40%-plus revenue growth that Align has delivered in the past.

Sure, Align's sales are close to triple the size of SmileDirectClub's. But the two healthcare stocks trade at similar price-to-sales (P/S) ratios. Align's P/S ratio of 8.8 is actually a little higher than SDC's multiple of 8.3. With SDC's faster rate of revenue growth, there's a good case to be made that it's the better stock to buy right now.

There's no question that Align Technology still has plenty of room to grow. The company currently claims 17% of its total addressable market and only 7% of the teen market. Align should also be able to expand this market by introducing new versions of its Invisalign clear aligners that target more severe cases of malocclusion (misalignment of teeth).

But SmileDirectClub arguably has even bigger upside potential. The company has treated around 750,000 patients so far. There are around 124 million potential cases that its products could treat in the U.S. alone. Add several times that amount with the global market. Note also that SDC's clear aligners are significantly less expensive than Align's, which could enable the company to grow its market share at a faster rate than the current industry leader.

And that's just the clear aligner opportunity. SmileDirectClub has also moved into other oral care products. In January, the company announced a partnership with Walmart to sell products including electric toothbrushes, teeth-whitening systems, toothpaste, water flossers, and ultrasonic cleaners for dental care products under the SmileDirectClub brand.

3. A disruptor to the disruptor

Many investors were initially drawn to Align because of its disruptive potential. The company's clear aligners were more appealing than the metal-and-wire braces of the past. Align steadily gained ground with its Invisalign aligners, disrupting the established orthodontic industry.

Now, though, SmileDirectClub looks like a disruptor to the disruptor. While patients must visit a dental professional to be fitted with Align's Invisalign aligners, SDC uses a direct-to-consumer (DTC) teledentistry approach. It's more convenient and, as already mentioned, less expensive.

Many dentists and orthodontists have been opposed to SDC. Trade groups and state dental boards have tried to block the company from using teledentistry. But SDC has won in every case so far.

The company is winning reimbursement deals with major insurers. It's opening SmileShops -- retail outlets to build awareness for its products -- inside big retailers. SDC is even expanding its business model to include dental professionals in a direct challenge to Align. The bottom line is that SmileDirectClub is no longer a potential rival on the fringe of the market; it's a formidable competitor with a rapidly growing presence in the U.S. and in other countries.

One reason to line up with Align

Despite these reasons to buy SmileDirectClub instead of Align Technology, there's still one major reason to go with Align instead: Its profits. SDC continues to lose boatloads of money, posting a net loss of $387.6 million in Q3 alone. Meanwhile, Align made $442.8 million in profits last year.

SDC has plenty of cash to fund operations for a while. However, it's still likely that the company will have to raise additional capital in the future in ways that dilute the value of existing shares.

You can bank on Align putting its hard-earned profits to work to maintain its dominance in the clear aligner market. The company could very well out-innovate SDC. And if Align begins to see worrisome erosion in its business, don't be surprised if the company attempts to pivot at least in part to a DTC model itself.