Please ensure Javascript is enabled for purposes of website accessibility
Log In Help Join The Motley Fool
Free Article Join Over 1 Million Premium Members And Get More In-Depth Stock Guidance and Research
By Travis Hoium - Feb 9, 2020 at 11:20AM

Space travel for the masses may not be far away.

One of the aspects I've been trying to improve as an investor this year is not letting valuation or fundamentals get in the way of buying truly disruptive stocks. Sometimes the market's biggest winners seem incredibly expensive, but when growth kicks in they can generate market-crushing returns over the very long term. Today, I'm digging into Virgin Galactic Holdings (SPCE -1.48%) and looking at where it could be a decade or more from now, while understanding that it has a lot of work to do to get there.

I want to focus this analysis on barriers to entry and optionality in space flight. And those two strategic looks at the business could tell us if it has a probability to be a winning stock if space flight ever really takes off. 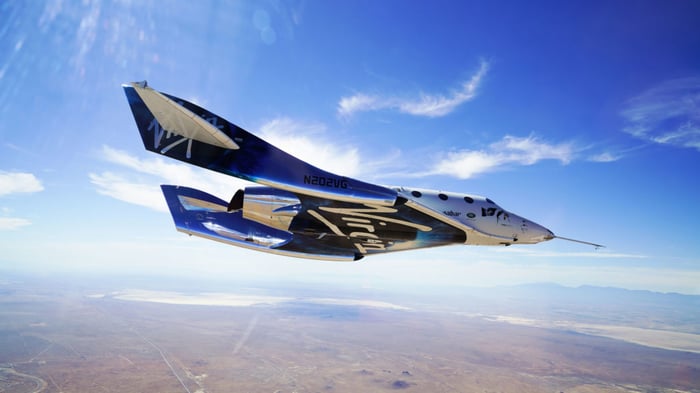 There are really only two space-travel-related companies today -- Virgin Galactic and Blue Origin. So if space travel becomes any kind of meaningful business, there isn't much competition. And it isn't likely new entrants will come to the market anytime soon. Potential competitors like SpaceX and Boeing have other priorities, like deeper-space missions and fixing problems in commercial airliners, respectively.

A head start is a big deal in a business like space travel, too. Like any aircraft maker, space travel companies need to design aircraft, get Federal Aviation Administration approval, and do flight tests before flying passengers. That process can take years or even decades to complete, so an early-mover advantage is highly valuable.

Barriers to entry in Virgin Galactic's business are high, and that's one reason the stock could soar as the business grows. Ultimately, the unknown is whether space travel will be valuable to customers, but if it is, this is the best place for investors to find a growth stock.

Tickets for early space flights start at $250,000 apiece, meaning the addressable market is very small. According to Virgin Galactic, there are 1.78 million people with a net worth over $10 million, which is where it puts its addressable market. But even from that small market the company has booked $80 million in deposits, so there's clearly demand. These early customers will be the ones proving the market, paying for upgraded aircraft, and giving the company scale to grow the fleet to an estimated five spacecraft by 2023.

Over time, though, ticket costs should come down as efficiencies and scale help the business. And if ticket costs come down, the potential market expands. Virgin Galactic says that the number of people with a net worth between $1 million and $5 million tops 37 million. And that's a class of people who may see value in a $25,000 ticket (for example) for a two-hour flight from Los Angeles to Tokyo instead of today's 12-hour flight time.

Keep in mind that companies with private jets are regularly spending $20,000 or more per flight for executives to fly around the country, so they put a lot of value on time and exclusivity. A $25,000 or even $100,000 flight that can save precious hours would certainly see some demand in the $600 billion commercial passenger market.

As more customers sign up, the cost of flights goes down and demand grows. This could be a virtuous cycle for Virgin Galactic long-term.

Optionality for the future

Virgin Galactic's business is really two companies, the consumer-facing flight company called Virgin Galactic and the aircraft design and manufacturing arm known as The Spaceship Company. This structure gives the company a lot of options in the future, depending on how the market unfolds.

The manufacturing company has the opportunity to sell aircraft to third parties, develop high-altitude platforms, and even move into electric air mobility. Since the company is developing its own technology, it has lots of options for where to move the business, and that may mean something beyond just building aircraft/spacecraft for Virgin Galactic.

As for the consumer-facing side of the business, it could run multiple long-haul flights around the world to wealthier markets like Tokyo, Los Angeles, New York, London, and Dubai. Whether it's individuals or businesses buying tickets, there could be a large market for faster air travel, and Virgin Galactic controls its destiny in growing that business.

Depending on how the business plays out, Virgin Galactic has a lot of options.

This is a long-term bet

Management expects Virgin Galactic to grow revenue from just $31 million in 2020 to $590 million in 2023 as flights annually grow from 16 to 270. Whether those predictions are accurate or not, it's hard to argue this is a value stock at a $3.6 billion market cap. This is a growth company that's trying to disrupt a nearly 100-year-old aviation industry. It has a lot going for it, like a first-mover advantage, strong barriers to entry, and lots of optionality for how the business grows. But it has to prove out a brand-new market for very high-end space travel. I think it can do it, but there's no guarantee of success and it may take a decade or more to prove whether the stock will be a winner or not. I'm adding an outperform call on my CAPS page, and you can track the pick there to see if it beats the market long-term.