Please ensure Javascript is enabled for purposes of website accessibility
Log In Help Join The Motley Fool
Free Article Join Over 1 Million Premium Members And Get More In-Depth Stock Guidance and Research
By Keith Noonan - Updated Feb 9, 2020 at 11:35AM

The cybersecurity stock rebounded as information warfare threats moved to the foreground.

Shares of Tenable (TENB 0.60%) gained 13.7% in January, according to data from S&P Global Market Intelligence . The stock bounced back from a roughly 11.8% sell-off in December, thanks to momentum for cybersecurity stocks. 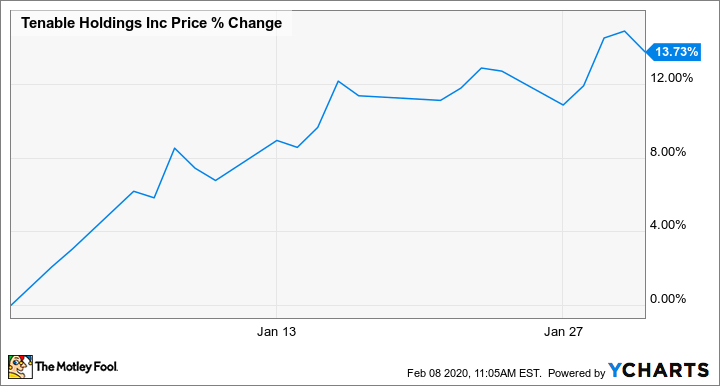 Tenable stock dipped in December following news that the company had acquired Indegy Ltd., an industrial cybersecurity specialist, in a $78 million deal. Shares gained ground in January as heightened tensions between the U.S. and Iran and new threat reports increased bullish sentiment on cybersecurity companies.

Investors reacted negatively in December to Tenable's Indegy acquisition, which was projected to come with between $15 million and $17 million additional expenses and have an adverse impact of between $0.15 and $0.17 per share on fourth-quarter earnings.

The killing of top Iranian general Qasem Soleimani in a U.S.-conducted drone strike on Jan. 3 and subsequent Iranian missile strike on an Iraqi military base raised the prospect of heightened cyber warfare and lifted stocks in the cybersecurity industry. Companies including Cisco, CCL's Checkpoint Systems divisions, and CrowdStrike also published reports in the month outlining rising cybersecurity threats.

Tenable published its fourth quarter and full-year results after the market closed on Feb. 4. Sales for the fourth quarter climbed 29% year over year to reach $97 million, and the company added 461 new enterprise platform customers in the period -- with 52 of these customers signing on for six-figure contracts. Revenue for the full-year period was up 33% year over year at $354.6 million.

Tenable is valued at roughly 6.1 times this year's expected sales.

Market Sell-Off: 1 Growth Stock Trading in the Green This Year