Please ensure Javascript is enabled for purposes of website accessibility
Log In Help Join The Motley Fool
Free Article Join Over 1 Million Premium Members And Get More In-Depth Stock Guidance and Research
By Rich Duprey – Feb 10, 2020 at 11:15AM

The sound specialist's partnerships are beginning to pay off.

Sonos (SONO 0.75%) blasted past internal targets and analyst expectations as first-quarter sales surged 13% to $562 million, generating a 29% gain in earnings before interest, taxes, depreciation, and amortization (EBITDA) for a total of $113 million.

Wall Street had only been looking for sales of $546 million and profits of $0.48 per share compared to the $0.60 per share Sonos posted. But the first-quarter results were also well ahead of management's stated long-term goals of 10% revenue growth and 20% adjusted EBITDA gains.

What may have been more surprising is that Sonos left its outlook unchanged for 2020, which the market has seemingly shrugged off since the stock soared 12% on the results. It's finally trading above its IPO price once again. 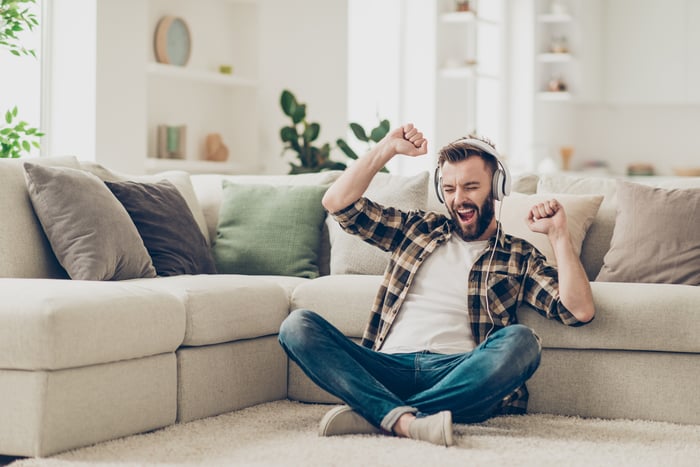 Despite several tone deaf missteps in recent weeks, the high-end wireless speaker maker sounded upbeat about the new products it introduced and its partnership with IKEA.

Revenue growth during the first quarter was driven by the introduction of new products, particularly system components like the Amp, Port, and Boost, which saw a 17% gain year over year. Smart speakers like its new Move and One SL also contributed to the gains.

And though its partnership with IKEA and Sonance is still the smallest revenue contributor, it is the segment that is seeing the greatest growth. Revenue surged 333% in the quarter to $33.9 million, and importantly, after purchasing one of the IKEA Symfonisk furniture-like speakers or a Sonance architectural speaker, consumers are returning to buy other equipment.

Although Sonos will only divulge how many new homes its products enter on an annual basis, so it wouldn't update that figure this quarter, CEO Patrick Spence assured the partnership drove the introduction to record levels.

"It has been something that's really helping expand the Sonos system and the software platform," he said, "and we think has a lot of opportunity for the future."

Preparing for a surprise

Analysts think that after such a blowout quarter Sonos is simply setting itself up for another upside surprise by not raising its outlook.

Sonos says the reason behind the lack of guidance improvement is due to a sales promotion that it ran in the quarter, which it believes pulled sales from the second quarter, so results may not be so dramatic.

Analysts, however, contend Sonos is still expecting to take a big hit from tariffs for the year even though the U.S. and China have negotiated a truce and there will be a reduction in the duties from 15% to 7.5%. Sonos, though, says it still expects a $30 million hit, of which it's already absorbed about $20 million worth. Regardless, Wall Street thinks Sonos is being overly conservative and will beat guidance.

It still remains to be seen whether there will be any fallout from the numerous public relations faux pas Sonos made recently. It made customers "brick" old equipment to upgrade to new components at a discount; said it would stop offering support for old equipment, which would cause the components to lose functionality over time; and then inadvertently exposed the email addresses of hundreds of customers who complained about the policy.

As they mostly occurred outside of the first quarter, there was no opportunity to see if there was any backlash, but Sonos has been fairly responsive to the critiques it received and the dustups may end up being much ado about nothing.

Certainly the positive steps the sound tech specialist has taken over the past year to boost sales are working almost flawlessly, though its stock still trades at elevated levels across several metrics despite only just breaching its IPO price.

Continuing to produce quality sound equipment even amid an industry flooded with cheap alternatives should drown out the sound of the doubters.