Please ensure Javascript is enabled for purposes of website accessibility
Log In Help Join The Motley Fool
Free Article Join Over 1 Million Premium Members And Get More In-Depth Stock Guidance and Research
By Billy Duberstein - Updated Feb 10, 2020 at 8:41AM

John Legere is leaving, but may go out with a bang.

Challenger telecom T-Mobile hosted its fourth-quarter and full-year 2019 earnings release last Thursday, Feb. 6. The earnings call is potentially the last to be hosted by CEO John Legere, who is handing over the reins to current president and COO Mike Sievert in May.

Legere was originally appointed CEO of T-Mobile, a subsidiary of Deutsche Telekom, in 2012, to turn around the struggling telecom. And boy, did he -- cutting costs and rebranding T-Mobile as the "Un-Carrier," a cool, customer-friendly alternative to Verizon (VZ 0.95%) and AT&T (T 1.65%). T-Mobile has gone on to steal market share from the big two for years, with the stock absolutely crushing those of its rivals. 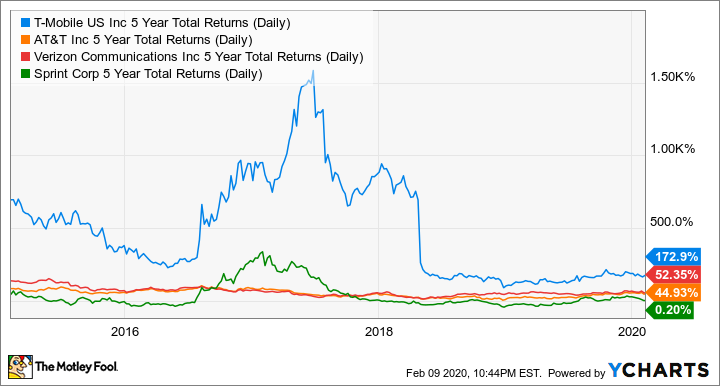 The earnings results and conference call wound up being good ones. T-Mobile beat analyst expectations for both revenue and earnings per share, impressively increasing profitability despite significant investments in coverage expansion and 5G. Moreover, Legere hinted that one last "Un-Carrier Moment" would be unveiled later this month before he leaves. 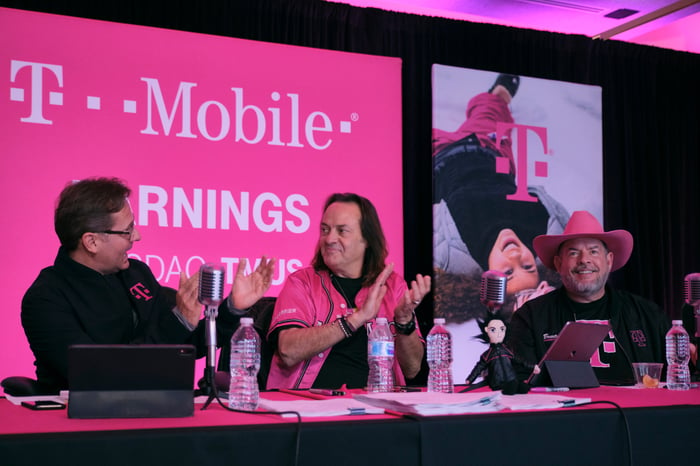 Another solid year for T-Mobile

While overall revenue growth of 3.8% might not seem so hot, T-Mobile actually grew core wireless service revenue at a higher clip of 6.3% for both the quarter and the year. Always good to see, adjusted EBITDA (earnings before interest, taxes, depreciation and amortization) grew faster than revenue, net income grew faster than EBITDA, and free cash flow grew faster than net income for the full year 2019. EPS growth was lower than net income growth because T-Mobile suspended its stock repurchase plan in preparation for its merger with Sprint (S), which is being held up by several state attorneys general.

At first glance, T-Mobile's guidance for the upcoming year might have underwhelmed. Management forecast just 2.6 million to 3.6 million postpaid mobile net adds versus 2019's 4.5 million, and $13.7 billion to $14 billion in adjusted EBITDA, or just 3.4% growth over 2019 at the midpoint.

But there were a few positive points. The company's free cash flow guidance was $5.4 billion to $5.8 billion, a 30% gain at the midpoint, as capital expenditures are forecast to drop next year. That puts T-Mobile's valuation at just 13 times next year's cash flow number, firmly in value stock territory.

In addition, management pointed out that it usually guides conservatively, and that for the last two years it has raised its EBITDA forecast every single quarter.

Most interesting perhaps, Legere and his team hinted that a new Un-Carrier Moment would be forthcoming before the end of the quarter. That's the term T-Mobile uses for a big, bold offering to solve a customer pain point and further disrupt the traditional telecom industry.

Examples of past Un-Carrier Moments include Binge On, which allowed customers unlimited mobile streaming (as long as it was in 480p resolution), paving the way for T-Mobile's unlimited data plans (now the industry standard) and free Netflix for families. Other moves include Simple Global, allowing free talk, text, and 2G data in foreign countries; and Carrier Freedom, where T-Mobile would pay off existing device installment payments on other carriers in exchange for switching to T-Mobile. More-recent moves were including all taxes and fees within the monthly service charge, and T-Mobile Tuesdays, where its customers receive discounts at certain restaurants and retailers.

Management didn't say what the new Un-Carrier Moment would be, only hinting, "Stay tuned for more, and let the speculation games begin."

Going out with a bang

The strong results and pending Un-Carrier Moment would certainly be a good way for Legere to go out, capping an impressive run as a transformative CEO.

Yet while investors cheered results, uncertainties do remain. The Sprint merger is still up in the air, and is taking much longer to close than anticipated. Management was adamant that it would win the case against the state AGs and get the deal done, but it's still unresolved.

In addition, the 5G race is on in earnest. While T-Mobile says it has a wide lead in terms of coverage, that is only the groundwork 600 MHz layer, as we haven't really seen 5G capabilities just yet. The company has millimeter wave set up in seven cities, behind Verizon's and AT&T's millimeter-wave offerings. But T-Mobile insists that competitors' capabilities only cover a tiny area within those markets, and software isn't even available to give customers a true 5G experience, so this is all moot for now.

Certainly, the Sprint merger and 5G race remain unresolved. But if T-Mobile continues Legere's legacy and executes as it has, it should continue leading the industry, both in terms of customer-friendly features as well as stock performance.