Shares of cable operator Altice (NYSE:ATUS) appreciated 65.5% in 2019, according to data from S&P Global Market Intelligence . At first, it might seem odd that a cable operator did so well in 2019, when cord-cutting of the traditional video bundle accelerated. However, that headwind was priced into the industry in 2018, when many cable operators saw their stocks fall. Even with 2019's surge, Altice USA is only just now getting back to the levels the stock traded at when it went public in late 2017. 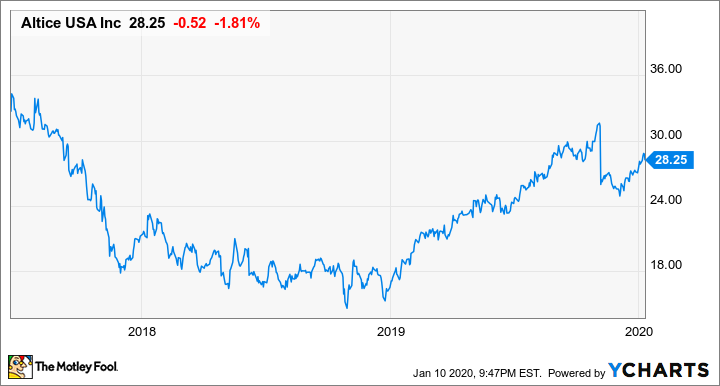 Nevertheless, consumers' thirst for more broadband bandwidth and higher speeds as a necessary staple of modern life allowed for overall growth at Altice and other operators. The completion of the DOCSIS 3.1 buildout also gave cable operators an advantage over satellite TV providers, allowing them to take market share. In addition, Altice has a number of innovative ventures it announced in 2019. As cable took more share from satellite, cable operators grew overall customer relationships in 2019, despite video losses. More relationships brought in over a fixed network led to expanded EBITDA margins for Altice and the group, excluding new initiatives, such as mobile.

Speaking of mobile, Altice launched a new mobile service in September with rock-bottom rates of just $20 per line for Altice cable customers, less than half of the cost of rivals Charter (NASDAQ:CHTR) and Comcast (NASDAQ:CMCSA). Of course, Altice's network uses Sprint (NYSE:S), whereas the Comcast/Charter partnership uses Verizon (NYSE:VZ), which is a better network.

Meanwhile, Altice expanded usage of its Altice One cable platform, which unifies over-the-top streaming, cable, and broadband services in one seamless interface. On its recent third-quarter conference call, Altice said that of customers were on the Altice One box, up from 7% in the prior-year quarter, and management attributed Altice One with helping reduce churn and take market share.

Heading into 2020, Altice believes it can accelerate revenue and EBITDA as it harvests recent investments. Beyond mobile, Altice expanded its homes passed throughout the year, and has also been deploying fiber-to-the-home, which will not only boost broadband speeds in the future, but could also be used in 5G small cells. Investors should watch to see if that acceleration actually happens, as it would probably be necessary for shares to go higher after such a strong 2019.