Please ensure Javascript is enabled for purposes of website accessibility
Log In Help Join The Motley Fool
Free Article Join Over 1 Million Premium Members And Get More In-Depth Stock Guidance and Research
By Anders Bylund – Feb 10, 2020 at 9:59AM

The maker of field-programmable microchips posted mixed results and weak guidance due to shaky order flows from the automotive computing market.

Shares of Xilinx (XLNX) fell 13.6% in January, according to data from S&P Global Market Intelligence. The leading designer of field-programmable gate arrays (FPGAs) reported mixed third-quarter results near the end of the month, combined with drastic cost-cutting measures and soft guidance for the upcoming reporting period.

Xilinx posted sales of $723 million in the third quarter, 10% below the year-ago period and lower than the analyst consensus of roughly $731 million. Adjusted earnings fell 26% to $0.68 per share, exceeding Wall Street's target of $0.59 per share. Looking ahead, management set fourth-quarter revenue guidance at approximately $765 million, far below analysts' expectation of $825 million.

The company also announced a cost-cutting program that will reduce Xilinx's employee count by 7% through a combination of attrition without replacement and direct layoffs. 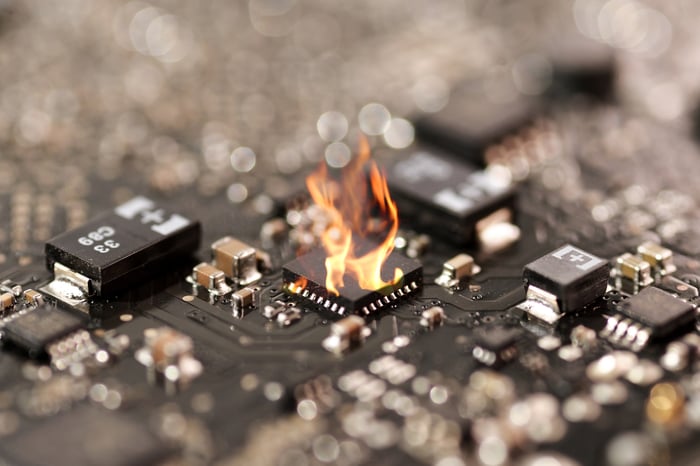 Xilinx is mainly experiencing slow orders from the automotive market, driven by macroeconomic and trade-related issues. Yes, the Chinese-American trade conflict reared its ugly head once more. In the earnings call, CEO Victor Peng said that the cost reductions should position the company for a strong rebound once the global market heats up again. Meanwhile, it's just "the appropriate thing to do given a slower near-term revenue growth trajectory."