Rumors recently surfaced that AMD (NASDAQ:AMD) was in advanced talks to acquire peer Xilinx (NASDAQ:XLNX). Those rumors have now been confirmed with AMD's announcement it has offered Xilinx shareholders $35 billion in an all-stock deal.

On the surface, this move may look like little more than a sideshow given rival NVIDIA's (NASDAQ:NVDA) $40 billion offer to take over SoftBank subsidiary ARM Holdings. However, Xilinx is a different animal entirely, one that will help AMD in its attempts to usurp semiconductor industry titan Intel (NASDAQ:INTC).

A windfall and a bet on further growth

First, AMD is fronting no cash here. Instead, it is using its skyrocketing stock price as a currency -- shares are up over 70% this year, valuing the company at over $92 billion in market cap as of this writing. For every one share Xilinx shareholders own, they will receive 1.7234 shares of AMD. Based on the exchange ratio at the time of the announcement, that pegs Xilinx shares at $143, or a market cap of $35 billion -- some 25% higher than just prior to the announcement.

As an all-stock merger, this is a jump higher for Xilinx owners, but not a cash windfall (the company expects this to be a non-taxable event). Instead, subsequent to the tie-up, Xilinx shareholders will own 26% of the new AMD. Besides the $300 million in annualized savings combining forces is expected to yield after 18 months, AMD's addition of Xilinx should help both chip companies double down on their growth initiatives.

NVIDIA's trajectory is safe, Intel's not so much

AMD makes a wide range of central processing units (CPUs) and graphics processing units (GPUs) that compete with Intel and NVIDIA. It's against the former that AMD has been able to make the most headway, especially with its CPUs for personal computers, data centers, and other general purposes.

While NVIDIA is making bold moves to continue its run as a computing accelerator for applications like AI, AMD acquiring Xilinx represents a very different approach. Xilinx is the leader in field-programmable gate arrays (FPGAs), a flexible general-purpose chip used in a wide range of equipment and computing systems. Because of their non-specialized construction and the fact that engineers can reprogram them in the field, FPGAs are key components in everything from industrial equipment to telecom networks to consumer electronics. In data centers specifically, Xilinx recently reported record quarterly sales of $106 million, though the segment only contributed 14% of total revenue.

If data centers are the high-growth computing unit of the future that companies like Intel, NVIDIA, and AMD claim they are, why bother with Xilinx? There are several reasons for AMD's interest here. For one, FPGAs are being applied to other high-growth use cases other than data centers. Other markets like 5G wireless networks, autonomous vehicles, and network-connected industrial devices also make liberal use of the chip type. Intel itself also made a bet on FPGAs with its $16.7 billion acquisition of Xilinx competitor Altera back in 2015.

Thus while NVIDIA is focusing its attack on application-specific computing, AMD is mirroring Intel's broader-based approach. But perhaps most important is that adding Xilinx to the fold will significantly and immediately improve AMD's profit margins (since AMD isn't offering any cash). Though it's a far smaller company, Xilinx has much higher gross profit margins and free cash flow generation (revenue less cash operating expenses and capital expenditures) than AMD. 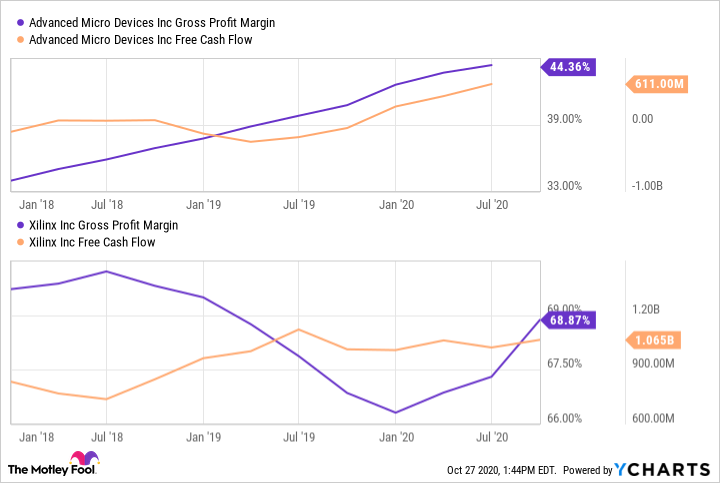 For a disruptive semiconductor business, positive cash generation is especially important, as it directly feeds into the company's ability to innovate and improve its products. AMD has spent $1.7 billion on research and development over the last year ended in September 2020, but adding Xilinx's budget of over $850 million in R&D -- not to mention Xilinx's complementary software development portfolio to make its hardware easier to deploy, and the $300 million in expected synergies -- will provide a significant boost to AMD's research capabilities.

For shareholders of Xilinx -- myself included -- becoming an AMD owner isn't such a bad deal as the two companies combine forces to battle against incumbent mega chipmaker Intel.