NVIDIA has unveiled some of its plans if it completes its $40 billion ARM Holdings takeover.

NVIDIA (NVDA -2.73%) has proposed a $40 billion takeover of Cambridge, U.K.-based ARM Holdings -- currently the subsidiary of Japanese telecom Softbank (SFTB.Y 1.45%). NVIDIA said it will commit to building the U.K.'s largest supercomputer for healthcare research as part of the deal, and recently unveiled its other plans in integrating ARM into what is quickly becoming the most powerful chip empire around. 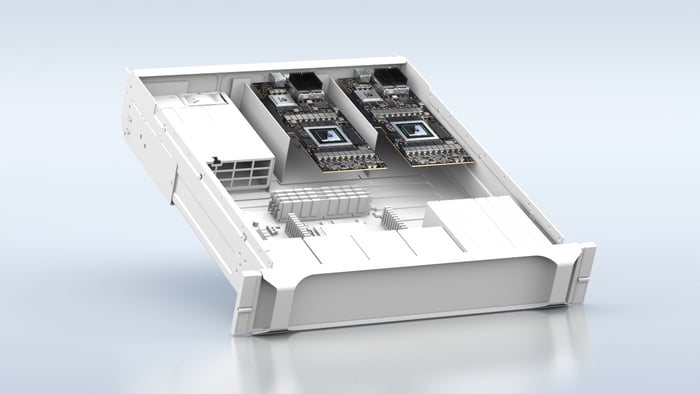 A tech platform for the future of computing

With the addition of ARM, NVIDIA would be able to add new chip licensing designs to its portfolio of GPUs (graphics processing units), data center networking hardware it scooped up from Mellanox earlier this year, and edge computing and robotics chips. Specifically, ARM's designs cover a wide range of uses from the massive global smartphone industry to multi-core processors designed for data management in data centers (dubbed the DPU, or data processing unit).

NVIDIA has used ARM designs for years in its Jetson portfolio of robotics chips (think industrial equipment to self-driving vehicles and everything in between). Ahead of the proposed tie-up, though, NVIDIA is expanding its reliance on ARM with its newly announced BlueField-2 DPUs for data center management -- further encroaching on a massive market dominated by Intel (INTC -3.08%). Integration of NVIDIA's GPU technology with ARM's CPU designs could also help it break into the smartphone market and compete with Qualcomm (QCOM -2.35%). And ARM will continue to be utilized for the EGX platform for edge computing -- which moves computing processes out of the cloud and moves them closer to the final source for processes that require higher data transfer speeds.

Whether NVIDIA winds up getting ARM or not, it's tapping the U.K. chip design powerhouse to build a new portfolio of hardware addressing the full spectrum computing needs. To be sure, controlling ARM directly would help the GPU leader make quicker headway in shaking up existing industries. But either way, NVIDIA has moved far beyond just a semiconductor company specializing in high-end video game chips and is increasingly looking like the leading chip designer of the future -- complete with a robust library of software to help developers put a myriad of AI applications into practice.