Please ensure Javascript is enabled for purposes of website accessibility
Log In Help Join The Motley Fool
Free Article Join Over 1 Million Premium Members And Get More In-Depth Stock Guidance and Research
By Travis Hoium - Updated Feb 12, 2020 at 11:18AM

Disruption in food may be right in front of our eyes.

In a few short months on the market, Beyond Meat (BYND 9.40%) has been on a wild ride, to say the least. Shares tripled right after its IPO, only to give back most of those gains. They are now hovering around $116 per share, more than quadruple its IPO price.

If you're thinking about buying Beyond Meat today, I don't think its volatility or even its past financial results should weigh too much on your mind. What investors should focus on is what the company is doing to disrupt food and how big a market potential that is. A decade from now, we could look back on this as one of the most disruptive companies in the world. 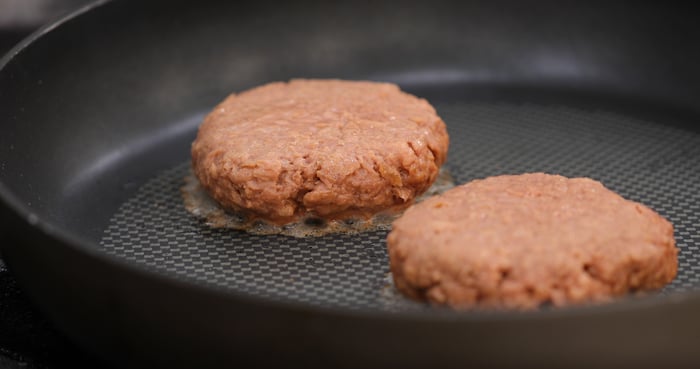 Beyond Meat burgers on the stove. Image source: Beyond Meat.

Let's start with the industry Beyond Meat is trying to disrupt, and that's the staple of all consumer goods: food. According to the U.S. Department of Agriculture, $1.46 trillion of food products were supplied to consumers -- from food service to food retailing -- in 2014. Fitch Solutions Macro Research estimates that meat alone in the U.S. is a $270 billion business.

Beyond Meat isn't trying to compete with every food product, but it's attempting to disrupt some traditional meat products. And the market it's entering is clearly huge.

What will be key for Beyond Meat is out-innovating the competition. And that may not be as hard as it seems.

I can't stress enough how stagnant most of the food industry is. From producers to distributors to restaurants, the business operates the same way it has for decades, and there's little reason to believe that it'll be disrupted from the inside.

Producers are just trying to squeeze a little more margin out of each sale; distributors are looking for efficiency and private labeling with lower costs to differentiate; and restaurants are traditionally high-risk, low-margin businesses. No one is set up to innovate, much less grow the way Beyond Meat is.

The chart below illustrates how slowly most of the food industry is growing. Tyson Foods has grown revenue 32% over 10 years. The other anomaly below is Kraft Heinz, which only grew in 2015 after the merger of Kraft and Heinz into one company. 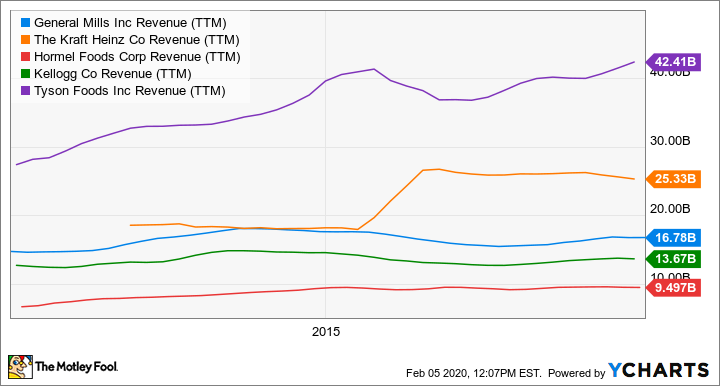 Overall, these companies are averaging annual growth rates between 0% and 3%, and most aren't even keeping up with inflation. That shows just how stagnant the food business has become.

Today's Beyond Meat is just the start

As fast as Beyond Meat's products are selling today, it hasn't become a product everyone likes. But it's developing products that will continue to disrupt food, and new innovations are surely around the corner. Beyond Meat spent 10.9% of revenue in the most recent fiscal year on research and development (R&D) and has a 30,000-square-foot innovation center in California. We don't know what will come out of that center, but new products are surely in the pipeline and will be hitting the market soon.

Traditional food manufacturers, on the other hand, are spending 2% of revenue or less on R&D, and that doesn't leave much for disruption. They're just not built to change and adapt as quickly as Beyond Meat is.

More and more, I think consumers will be looking for food alternatives that are more humane to animals and use more plant-based products, so no matter where Beyond Meat goes with its innovation, it has the potential to disrupt the market.

It's difficult to argue that Beyond Meat's stock is a value, but that's not the reason to buy it today. A decade from now, this could be a company that turned food on its head. And if that disruption takes place, this will be a big winner for investors, even if it doesn't seem cheap today.