Apple (NASDAQ:AAPL) was one of the best performing stocks of the past decade, and the company owed this amazing performance primarily to its signature iPhone.

The revolutionary device was so popular that investors, analysts, and consumers alike held their collective breaths every time Apple unveiled a newer, better model of the iPhone. However, the excitement surrounding the iPhone has cooled down significantly over the years, and Apple's iPhone sales have started slowing. 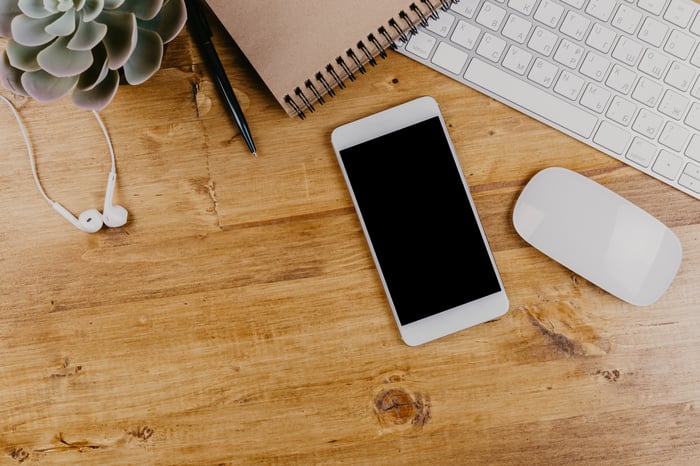 During its latest reported quarter -- the first quarter of its fiscal year 2020 -- Apple recorded iPhone sales of $56 billion, up 67.7% sequentially and 8% compared to the year-ago period.

This strong performance was fueled by the iPhone 11, which was released in September of last year. Says Tim Cook, CEO of Apple: "On iPhone, revenue in the December quarter was $56 billion. Again, that's up 8% over year ago. Thanks to the exceptional demand for the iPhone 11, iPhone 11 Pro and iPhone 11 Pro Max. In fact, iPhone 11 was our top selling model every week during the December quarter, and the three new models were our three most popular iPhones."

Cook went on to praise the latest iPhone models, calling them "by far the best" the company has ever devised. Clearly, customers worldwide were pleased with these models as well.

Apple's Wearables business has been booming in recent years. This segment -- which officially goes by Wearables, Home and Accessories -- includes the sale of such devices as the Apple Watch and AirPods.

During the first quarter, Apple recorded net sales of $10 billion for its Wearables segment, up by 37% compared to the prior-year quarter.  To quote Tim Cook again: "We had another incredible quarter setting an all-time record in virtually every market we track around the world and this product category is now the size of a Fortune 150 company."

Fortunately for Apple, it looks as if this particular segment will continue growing for the foreseeable future.

Last year, the demand for Apple's AirPods was so high that the company struggled to keep up the pace and had to increase its production significantly. Meanwhile, the company is looking to be an innovator in the health services department with the Apple Watch, and Tim Cook believes "Apple's greatest contribution" could be to people's health. With these opportunities, Apple's Wearables business will likely continue on its dazzling upward trajectory.

Apple's shares are still worth buying

iPhone sales could take a hit due to Apple taking precautionary measures related to the coronavirus outbreak in China. And while it is, at this point, difficult to asses the impact of this pandemic on the company's top line, Apple's strong performance during the last quarter is a good sign that it can still deliver healthy market gains moving forward.

Apple is currently trading at 20.7 times future earnings, and its price to earnings growth (PEG) ratio is 1.9.

These valuation metrics don't exactly make Apple a cheap tech stock, but in my view, the company is worth the premium.