Please ensure Javascript is enabled for purposes of website accessibility
Log In Help Join The Motley Fool
Free Article Join Over 1 Million Premium Members And Get More In-Depth Stock Guidance and Research
By Rhian Hunt - Feb 11, 2020 at 11:34AM

Investors seem ready to tuck in if JANA Partners’ board influence gets stronger.

Bloomin' Brands (BLMN -3.92%) -- familiar to most people under the name of its biggest restaurant brand, Outback Steakhouse -- is a restaurant company struggling with the contrary pressures of rising profits and sinking revenues. This uncertain picture has kept share value relatively low despite its seemingly successful push into delivery services and other positive indicators. Over the past few months, investors signaled through share price that they want Bloomin' to sell itself. Now, with activist investment company JANA Partners involved, there's a possibility Bloomin's sale could lead to even tastier outcomes for those investing in restaurant stocks.

Are Bloomin's smaller brands holding it back?

Outback Steakhouse's relative success has not been mirrored in other principal chains under the Bloomin' umbrella. According to Bloomin's Q3 report, sales are dropping fast at Bonefish Grill.

Outback sales grew 0.2% year over year, Carrabba's 0.1%, and Fleming's 0.4%. However, Bonefish Grill's -2.2% decline weighed on the company's overall US performance, shrinking overall North American sales for all brands by -0.2% for Q3.

In terms of the first 9 months of 2019, Carrabba's posted a -0.4% sales contraction. By contrast, the company's Outback Steakhouses in Brazil grew sales by 6.2% year over year during the same period. 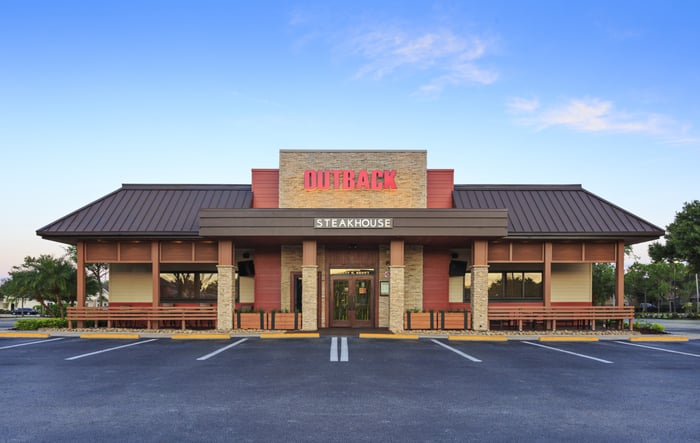 While Bloomin' doesn't break down capital expenditures by restaurant, Outback Steakhouse looks like the most efficient brand in terms of capex. Globally, 217 Outback Steakhouse locations are franchised rather than company-owned, or slightly more than 24% of the total. By contrast, only 9% of Carrabba's outlets are franchised, 3.5% of Bonefish Grill restaurants, and zero Fleming's Prime Steakhouse outlets, all of which are company-owned.

The relatively high number of Outback Steakhouses franchised shifts operating expenses to the franchisees, while Bloomin' pays for most or all of the outlays related to running the smaller brands. This further erodes their efficiency and profitability compared to Outback, while contributing to the company's fairly high level of debt.

Stockholders telegraphed their opinions loud and clear after David Deno became CEO in May 2019. Under Deno's leadership, Bloomin' declared in November 2019 that it planned to sell itself. Following this declaration, investors began bidding its shares up immediately. This might be a signal that shareholders studying the company's operations think that it has potential, but that a change of management and strategy is needed to achieve this higher value.

Adding support to this hypothesis is the shareholder reaction to the recent involvement of JANA Partners, an activist hedge fund founded and controlled by noted hedge fund manager Barry Rosenstein, in Bloomin's future trajectory. Jana bought up approximately 8.74% of Bloomin's shares in 2018, attempting to push the company into spinning off all its smaller brands. When it failed to achieve this, JANA sold off some stock, retaining an approximate 6% interest in Bloomin', but managed to get Wendy Beck, one of its personnel, onto Bloomin's board of directors.

Jana wasn't the only activist to attempt to change Bloomin's course. Privately held Barington Capital purchased a 5% stake in the company in 2018, and immediately sent a letter to the CEO. Barington also wanted Bloomin' to drop the smaller, less profitable brands like a hot potato and redirect all its resources toward boosting Outback Steakhouse's success.  Bloomin' refused to comply, and Barington eventually liquidated its position entirely in November 2019.

Circling back for another try, JANA Partners boosted its stake in Bloomin' back to roughly 9% in late August 2019. Jana declares it wants to seat two more people on the eight-person board of directors. If an additional slot opens up, it wants to add yet another of its candidates.

On Aug. 20, 2019, when JANA announced it would increase its Bloomin' holdings and become involved in attempting to steer the company again, share prices stood at $15.26. Share value immediately began rising, reaching $20.95 on Sept. 19.

From there, stock prices declined slowly for several months -- until Bloomin' released their Q3 results on Nov. 6, which included a section on "strategic alternatives" "including but not limited to, a possible sale of the Company."  Shares immediately spiked to $23.28, peaking at $24.05 on Nov. 29.

While the price has gradually dropped since to the neighborhood of $20.50 in early February 2020, both JANA's involvement and the potential for a sale of the company -- much like JANA's successful engineering of Amazon.com's (NASDAQ: AMZN) 2017 acquisition of Whole Foods -- are both seemingly crowd-pleasers for Bloomin's shareholders.

A glance at Bloomin' Brands operations seems to show that both JANA and Barington are correct in their assessment. The four smaller brands appear to represent little more than dead weight compared to the relative size and success of Outback Steakhouse. If Bloomin' sold its other brands, then centered its efforts on developing its Australian-themed steak outlet, it could potentially break out of its current doldrums and achieve robust growth. With JANA's directors possibly occupying 50% of the eight-member board in the near future, the hedge fund might indeed create the streamlined Bloomin' it wants, one more attractive to purchasers.

Back in 2017, JANA Partners's push to sell Whole Foods to Amazon caused the grocer's shares to skyrocket. Investors who are not averse to some measure of risk might want to add Bloomin' to their portfolios soon, in anticipation of JANA managing a reprise of that earlier success.