Please ensure Javascript is enabled for purposes of website accessibility
Log In Help Join The Motley Fool
Free Article Join Over 1 Million Premium Members And Get More In-Depth Stock Guidance and Research
By Adria Cimino – Updated Feb 12, 2020 at 11:26AM

Boston Scientific (BSX -1.55%) shares are off to a sluggish start this year, down 4.8% so far after climbing 28% in 2019. And the medical device maker's outlook for the current quarter may mean investors will have to wait a while for additional gains.

What's weighing on the company's outlook? The same problem that has made global headlines these past several weeks: the coronavirus. 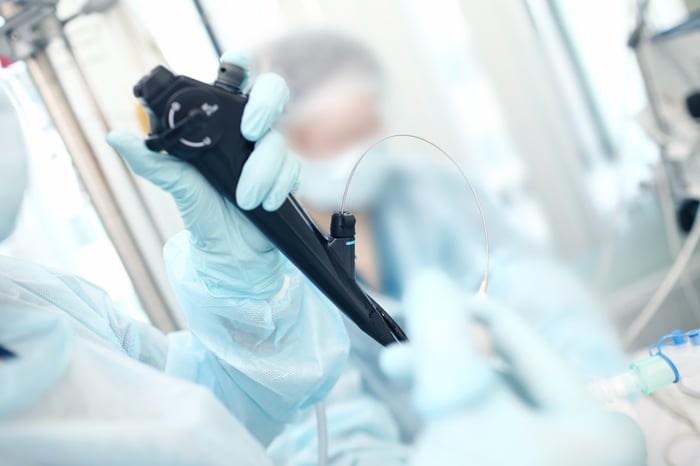 Boston Scientific, a maker of devices such as stents and catheters, estimated that the coronavirus in China could have a $10 million to $40 million negative impact on its sales in the first quarter. This would be due to delayed medical procedures as most medical resources are focused on handling the coronavirus situation, as well as supply chain disruptions. As a result, Boston Scientific announced first-quarter organic growth guidance of 5% to 7% and said the full-year growth guidance of 6.5% to 8.5% considers that the company will be able to make up for the slowdown in China business later in the year.

Since Boston Scientific reported $2.9 billion in fourth-quarter sales, even the company's highest prediction for damage isn't too ominous. Still, the uncertainty and possibility of any lost revenue may weigh on shares in the coming months.

Though the device-maker reported fourth-quarter earnings that surpassed analysts estimates -- and has done so for three straight quarters -- the mixed nature of the report might also hurt investor appetite for the shares. Cardiovascular was a bright spot, with sales increasing 18.7% for the quarter, and annual sales representing 39% of total company revenue. But organic revenue growth of 7.3% for the quarter came in below the company's guidance of 8% to 9% due to its high-voltage and electrophysiology businesses in the U.S. Both categories include devices for heart failure. While endoscopy sales gained 10% in the fourth quarter, the company expects the business to slow in the first quarter before picking up speed again for the full year.

That speed will surely have something to do with Boston Scientific's Exalt Model D Duodenoscope, which received clearance from the U.S. Food and Drug Administration recently and will launch later in the quarter. Duodenoscopes are used in endoscopic retrograde cholangiopancreatography, or ERCP, a procedure to explore pancreatic and bile ducts and treat related conditions.

ERCP is performed 1.5 million times globally every year, representing a big opportunity for Exalt-D. But here's the best news: The Exalt-D is the only FDA-cleared single-use duodenoscope. That's significant because cleaning traditional duodenoscopes requires as many as 100 steps, and any misstep opens the door to disease-causing pathogens.

Once again, though, investors will have to be patient. Boston Scientific said the launch of high-growth products such as Exalt-D is at first dilutive to gross margin, but the company said the device will be a strong revenue driver, and we should see this in the second half of the year. CEO Mike Mahoney even said in the recent earnings conference call that Exalt-D could be a blockbuster.

Is Boston Scientific a buy?

From a valuation perspective, Boston Scientific shares look like a good buy. They trade at about 12 times earnings, around their lowest level ever by that measure. Wall Street says there is room for 17% upside from the current share price, and the average analyst recommendation is a strong buy.

Boston Scientific may have to deal with some headwinds in the first part of the year, between the impact of the coronavirus on business and the cost of launching new products such as Exalt-D, so this medical device company might not be a "buy right now" for investors who want to minimize risk. That said, it is a great healthcare stock to add to your watch list, and long-term investors may decide that now, when the shares are indeed a bit sluggish, is a reasonable entry point.