Are you an investor looking for stocks that beat the S&P 500 index? Think big. And think medical devices. 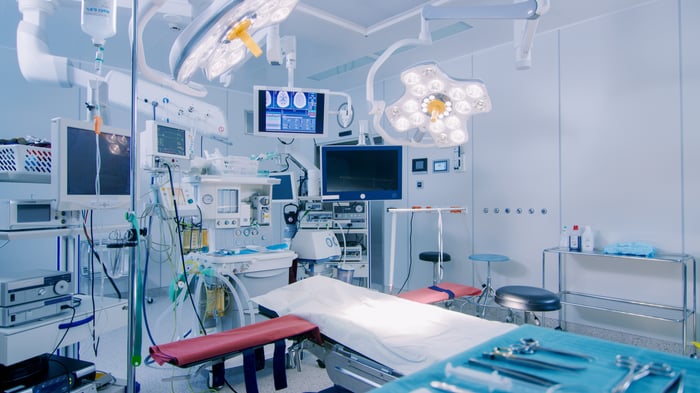 A quick overview of the medical device industry

There are three primary things you need to know about the medical device industry:

The medical device industry ranges from very low-tech products like surgical gloves to very high-tech products, including artificial heart valves. This wide diversity is reflected in the U.S. Food and Drug Administration's (FDA) definition of a medical device, which includes any "instrument, apparatus, implement, machine, contrivance, implant, in vitro reagent, or other similar or related article, including a component part, or accessory" that is used in diagnosing, curing, preventing, or treating a disease and isn't a pharmaceutical drug.

All medical devices in the U.S. are regulated by the FDA. Some devices that pose little risk to patients only have to be registered with the FDA without the requirement for a review. Other devices that involve moderate levels of risk require premarket notifications to be reviewed by the FDA. The FDA requires clinical testing to demonstrate safety and effectiveness for medical devices that carry the most risk for patients. Most of the 10 biggest medical device makers market products that fall into this last category.

What are the biggest medical device stocks in 2019?

Here are some key highlights for each of these big medical device stocks.

Johnson & Johnson isn't just the biggest medical device stock on the market; it's the biggest stock in the entire healthcare sector. J&J is a holding company that operates more than 260 companies across the world. These companies are organized into three business segments: medical devices, consumer, and pharmaceuticals.

But while its medical devices segment contributes around one-third of Johnson & Johnson's total revenue, the company's biggest segment in terms of sales and revenue growth is its pharmaceuticals business. The pharmaceuticals segment generates roughly half of J&J's total revenue. Its top products include immunology drugs Remicade and Stelara and cancer drugs Darzalex, Imbruvica, and Zytiga.

Abbott's cardiovascular and neuromodulation products segment ranks as the top revenue source for the company. This segment's products include a broad lineup of medical devices for rhythm management, electrophysiology, heart failure, and vascular and structural heart devices, plus neuromodulation devices for the management of chronic pain and movement disorders. Another medical device with fast-growing sales that isn't included in any of Abbott's segments is the FreeStyle Libre continuous glucose monitoring (CGM) system.

The cardiac and vascular group contributes around 38% of Medtronic's total revenue. This segment develops and markets a wide range of cardiovascular products, including cardiac monitors, coronary stents, heart valves, and pacemakers.

Medtronic's minimally invasive therapies group and its restorative therapies group each generate a little more than one-quarter of the company's total revenue. The former markets products including surgical staples and meshes used in hernia repair, while the latter markets products such as bone grafts and robotic surgical systems added with the 2018 acquisition of Mazor Robotics. While Medtronic's diabetes group contributes less than 10% of total revenue, sales for its insulin pumps and CGM systems are increasing significantly.

Stryker is another company that makes all of its revenue from medical devices. It's organized into three business segments: orthopedics, medsurg, and neurotechnology and spine.

Stryker's orthopedics segment isn't too far behind, contributing 37% of total revenue. This segment primarily markets implants used in hip and knee joint replacements and trauma and extremities surgeries. The company's neurotechnology and spine segment kicks in the remainder of Stryker's total revenue. It focuses on developing and marketing neurosurgical, neurovascular, and spinal implant devices.

The BD medical segment generates more than half of the company's total revenue. This segment sells a wide lineup of products including intravenous (IV) catheters, syringes and needles, infusion pumps, and medication dispensing systems.

The company makes more than 70% of its total revenue from recurring sources. These include the sale of instruments and accessories that must be replaced after surgical procedures are performed, services, and operating leases. Intuitive Surgical's business model is changing in that a larger percentage of its customers are choosing to lease robotic surgical systems rather than buy them. This should boost the company's recurring revenue over the long run.

In addition to the da Vinci system, Intuitive also now has another robotic surgical system on the market. The company launched its ION system after receiving FDA clearance in February 2019. This system is used to obtain tissue from within the lung for analysis to determine if a person has lung cancer.

Boston Scientific currently ranks at No. 7 on the list of the top 10 medical device stocks, but its acquisition of United Kingdom-based medical device maker BTG could bump the company into the No. 6 spot. The company has three business segments: medsurg, rhythm and neuro, and cardiovascular.

Boston Scientific's other two segments each bring in around 31% of total revenue. The medsurg segment sells endoscopy products as well as urology and pelvic health products. The rhythm and neuro segment markets medical devices including catheters used in electrophysiology, defibrillators, and neuromodulation devices for treating movement disorders and managing chronic pain.

Illumina is the leading maker of genomic sequencing systems. These systems are used to map DNA sequences. The company's technology played an important role in helping reduce the cost of mapping a human genome (the complete set of genes) from $200,000 in 2009 to less than $1,000 today.

Like Intuitive Surgical, Illumina claims a high level of recurring revenue. In 2018, 83% of Illumina's total revenue stemmed from recurring sources -- 65% from sales of consumable chemicals and reagents used in sequencing and 18% from services.

Illumina's sequencing systems range from high-throughput products like HiSeq to small desktop systems such as iSeq. The company's NovaSeq system, introduced in 2017, continues to drive much of Illumina's growth as existing HiSeq customers convert to the system and new customers begin performing genomic sequencing.

TAVR is by far the biggest moneymaker for Edwards Lifesciences, contributing roughly 60% of total revenue. The Sapien 3 heart valve has been a huge hit for Edwards. But the fastest sales growth is coming from Edwards' surgical structural heart products. These products, which primarily include aortic tissue valves, generate more than 20% of total revenue.

Edwards Lifesciences' critical care product group brings in around 18% of total sales. This group includes the company's HemoSphere advanced monitoring platform. At the bottom is the transcatheter mitral and tricuspid therapies product group, which adds less than 1% of total revenue. These products include Edwards' transcatheter valve repair systems.

The competitive dynamics in the medical device industry are constantly changing. These large players in some cases compete against each other. They also face the possibility of being disrupted by new technology developed by some of the thousands of smaller medical device makers.

Each of the 10 largest medical device companies develops complex products that require approval by the FDA in the U.S. and by other countries' regulatory agencies. Failure to obtain the necessary approvals to go to market could negatively impact these companies' growth prospects.

Many of the products developed by the largest medical device makers potentially pose safety risks to patients. As a result, these companies face product liability risks if patients are harmed in any way by the use of their medical devices.

Like stocks in nearly every industry, these medical device stocks could be pulled down by macroeconomic issues such as an economic recession. Also, because many of these large medical device makers generate significant revenue in international markets, particularly China, trade barriers or the threat of such barriers can hurt these stocks.

One key reason for considering buying these large medical device stocks is the worldwide aging demographic trend. As more individuals age, the need for many of the medical devices made by these companies will increase.

Beyond the aging populations across the world, there's also likely to be a significant increase in chronic conditions among individuals who aren't as old. Factors such as diet and lack of physical activity are contributing to this increase. Medical device makers that make cardiovascular and diabetes care products could especially benefit from this trend.