The marketing and customer relationship management specialist ticked all of the boxes this quarter.

2019 was a year of transition for HubSpot (HUBS 4.32%), and the marketing software company took investors on a roller-coaster ride. After gaining nearly 63% and reaching all-time highs in August, the stock waned late in the year, closing out the year up 26%, trailing the 29% gains of the S&P 500. The company has been investing heavily to improve its existing products and expand its cloud-based tools and offerings.

HubSpot released its fourth-quarter financial report after the market close on Wednesday, and the results show that those investments are beginning to pay big dividends. Here are five takeaways from that report. 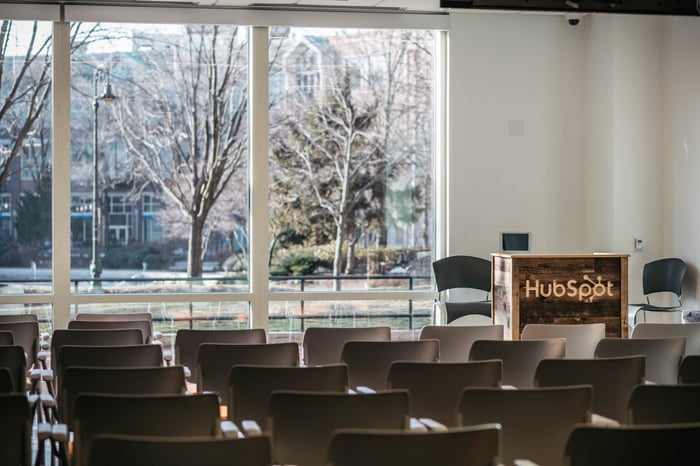 HubSpot delivered revenue of $186.2 million, up 29% year over year. Without the negative effect of foreign currency exchange rates, the results would have been even better, up 31% in constant currency. This easily surpassed management's guidance range, which topped out at $181.3 million, while also gliding past analysts' consensus estimates of $180.9 million.

The results were propelled by strong subscription revenue, which grew 31% year over year to $179 million, while professional services revenue -- which tends to be lumpy -- slipped 2% to $7 million. Even more importantly, HubSpot exited the quarter with a revenue retention rate higher than 100%, which means existing customers are spending more than they did this time last year.

The better performance on the top line translated to higher-than-anticipated profitability. HubSpot generated non-GAAP net income of $20.9 million, or $0.45 per diluted share, up 22% year over year and exceeding the company's expectations of $0.41 a share at the midpoint of its guidance and analysts' consensus estimates of $0.42.

3. A steady drumbeat of customer additions

On the Q4 conference call, CFO Kate Bueker said the new higher revenue retention rate is here to stay. After years stuck at about 90%, the number got a boost as the result of products the company has added or improved in recent years. "In the Sales Hub, for example, people are adding incremental seats ... and as we continue to add functionality into the enterprise, we will see more ... upgrades as well," she said. "So I do think that we remain comfortable that we can sort of sit at or above 100%."

One of the keys to successful growth is customer satisfaction, which can be tricky to navigate, even for the best of companies. One way to gauge customer approval is the net promoter score, which measures a customer's willingness to recommend a product to others, and the metric has been on HubSpot's radar for years.

On the conference call, CEO and co-founder Brian Halligan said, "One of the most gratifying things we saw in Q4 were record-high net promoter scores from our customers." He went on to note that the metric saw a "big lift" in the fourth quarter from previous investments the company made to improve the customer experience. This also bodes well for customer retention going forward.

For the first quarter of 2020, management is expecting revenue in a range of $192.5 million and $193.5 million, which would represent about 27% growth at the midpoint of its guidance. This is easily ahead of Wall Street's expectations, as analysts' consensus estimates were calling for revenue of $189 million. Analysts are no doubt busy raising their price targets in the wake of HubSpot's high expectations.

The software-as-a-service company's profit forecast was lighter than analysts anticipated, calling for adjusted earnings per share of $0.23 at the midpoint of its guidance, compared to expectations of $0.35.

HubSpot's full-year estimate was also robust, forecasting revenue in the range of $840.5 million to $844.5 million, which would represent growth of about 25%, comfortably ahead of expectations of $829 million.

With all of the boxes checked, it's no real surprise that HubSpot stock rallied 9% on the news.