Please ensure Javascript is enabled for purposes of website accessibility
Log In Help Join The Motley Fool
Free Article Join Over 1 Million Premium Members And Get More In-Depth Stock Guidance and Research
By Justin Cardwell - Feb 13, 2020 at 10:30AM

The payments technology company has given investors a substantial return over the last 12 years.

Shares of Visa have grown immensely from the first day of trading on the New York Stock Exchange (NYSE). Let's see how much a $100 investment into Visa's IPO would be worth today. 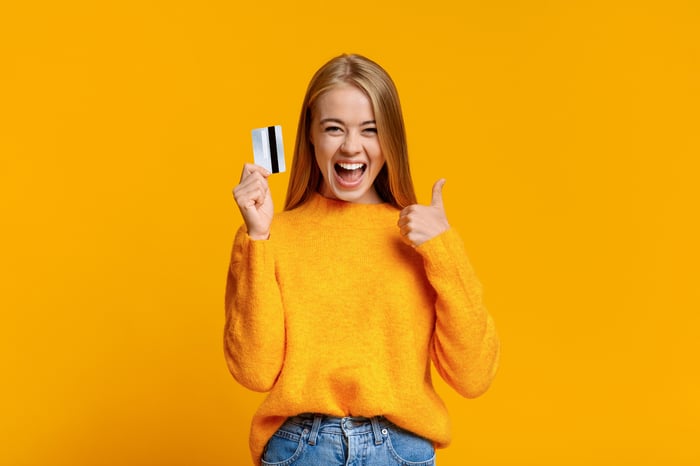 A shareholder investing $100 in the $44 per share IPO would have two shares with an $88 value (the NYSE would not allow fractional share purchases in 2008). Before determining the current value of these shares, we must first calculate the 4-for-1 stock split on March 18, 2015 -- which simply means that Visa diluted the total common shares outstanding by four, lowering the share price, and giving shareholders four shares for every share in a portfolio.

Over 95% of Visa's revenue comes from three segments: data processing, international transactions, and services, each being a low-cost service. Visa's business model is similar to a tollbooth, where Visa makes money every time a consumer makes an electronic transaction. This cost-efficient business model drives the impressive operating margin of 66.3% per the recent first quarter, and net income margin of 54%, an eight-percentage point gain from 2015's net income margin of 45.59%.

In an effort to bolster margins, Visa recently announced an overhaul to the fee structure for U.S. merchants, which will charge e-commerce sites a higher rate from $1.90 to $1.95 for $100 card-not-present transactions, and a lower fee for supermarket transactions with a 33% drop for $50 transactions.

This overhaul to the fee structure will allow Visa to grow with the fast-paced e-commerce segment, which eMarketer predicts an increasing percentage of total retail transactions stemming from global e-commerce sales -- growing from $3.535 trillion in 2019 to $6.542 trillion in 2023.

Staying relevant in a fast-paced industry

In January, Visa announced a $5.3 billion cash acquisition of the fintech company Plaid. This deal was well-timed as an increasing number of consumers are using fintech applications to transfer money between accounts. Visa's press release said, "75% of the world's internet-enabled consumers used a fintech application to initiate money movement in 2019 versus 18% in 2015" -- creating a positive narrative behind the $5.3 billion investment.

Popular fintech apps and services include Betterment, Chine, Transferwise, and Venmo (which is owned by PayPal). Visa stated that one in four consumers use Plaid's service as over 11,000 financial institutions are connected to 2,600 fintech developers in the market. The acquisition is pending regulatory approval with an expected decision between March 2020 and June 2020, and if approved, will strengthen Visa's position within the fintech sector.

The war on cash is a win for Visa

Visa's forward price-to-earnings ratio of 32.67 is in line with the top competitor, Mastercard (MA -0.92%), with a forward P/E of 35.99. Visa's heavy valuation is appropriate given the large profit margins and 17.81% year over year earnings-per-share growth. The low-cost tollbooth business model is a win for investors as the global economy transitions away from cash, providing plenty of growth for Visa during the transition.

An investor holding eight shares of Visa with a 1,790% return on investment from the IPO will want to purchase additional shares of Visa as the growth will continue for the company -- reaping the many benefits of a low-cost growth company.