Please ensure Javascript is enabled for purposes of website accessibility
Log In Help Join The Motley Fool
Free Article Join Over 1 Million Premium Members And Get More In-Depth Stock Guidance and Research
By Royston Yang - Updated Feb 13, 2020 at 9:18AM

This is one company I would love to own.

When it comes to looking for a suitable investment, my criteria have changed over the years for ensuring only the best candidates are selected. These days, my long-term investment strategy is to focus on buying stock in companies that have a proven track record of financial and operational performance, have a strong and trusted brand, and have sustained innovation. A company that fulfills all these criteria is Nike (NKE 4.55%), and it's the one stock that looks quite attractive right now.

When Nike was first launched, it managed to beat the odds and challenge the near-monopoly of Adidas at a time when Adidas was the dominant running shoe brand in the United States. Set up in 1964 by founder Phil Knight and known as Blue Ribbon Sports back then, Nike has grown by leaps and bounds in the ensuing 56 years to become the $120 billion sporting apparel and footwear giant it is today. The company is now led by former eBay CEO John Donahoe, who replaced longtime CEO Mark Parker last month.

With this long, established track record of performance, you might think of Nike as a solid value stock investment. But with new leadership stepping in and a brand that's succeeding on numerous fronts, there are reasons to believe Nike still qualifies as a superior growth stock. 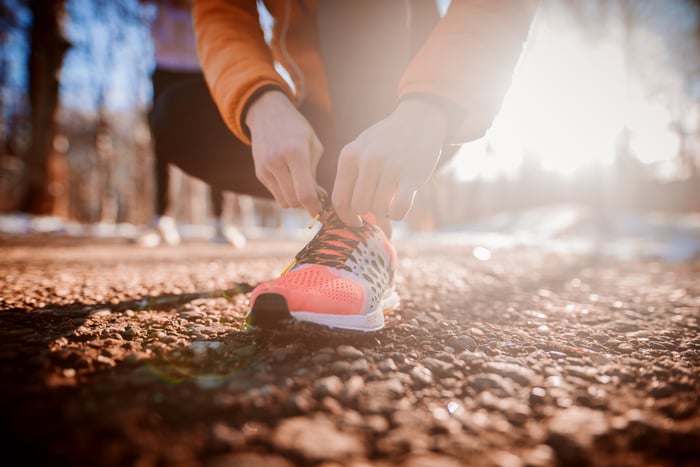 Nike has displayed an uncanny ability to continue growing its revenues year over year for the last five years, which is impressive for a company that is already so large. For the half-year ended Nov. 30, 2019 (fiscal H1 2020), Nike again reported year-over-year growth in revenue of 9%. This growth comes as a result of Nike's expansion in regions such as China and Latin America, as well as research and development into new, exciting products to generate consistent customer demand. 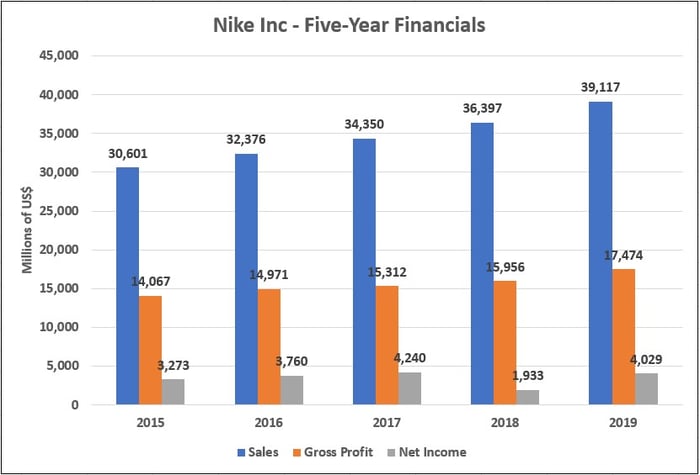 Gross profit has increased in line with revenue, though the gross margin has declined slightly from the high of 46% back in fiscal year (FY) 2015, to around 44.9% for fiscal H1 2020. Net income has also risen steadily, but FY 2018 saw the effect of changing tax law enacted in December 2017, which allowed Nike a one-time opportunity to repatriate foreign earnings at a reduced tax rate. This recognition dented the net income for that fiscal year, but FY 2019 saw net income back on its growth track. Fiscal H1 2020 continued this growth momentum with net income up 28% year over year to $2.48 billion.

Ahead of the Tokyo Olympic Games in 2020, Nike has unveiled a new range of footwear designed to provide long-distance runners with noticeable performance benefits. The new line of footwear will be an extension of the NEXT% platform, in what will be the next iteration of its performance-enhancing shoes under its Alphafly series.

Two new shoes will debut at the Games. The Air Zoom Victory track spike will include the ZoomX foam along with a carbon-fiber plate to make a lightweight shoe for marathon runners, and the Air Zoom Viperfly will include Atomknit in its upper in order to lock the foot down even better, making it a must-wear shoe for sprinters.

Nike takes innovation to new heights with the release of these two new groundbreaking technologies and further reinforces why investors should buy this company.

With Covid-19 (commonly referred to as the coronavirus) creating a health crisis in China, Nike has had to announce the temporary closure of around half of its Nike-owned stores in the country. Stores that do remain open are operating with reduced hours and experiencing far lower foot traffic. Nike is not the only company to be affected by this new bug, as other businesses are also feeling the effects from closures of stores, tourist attractions, and manufacturing facilities. But Nike operations and sales do rely on China a bit more than other companies.

As the situation in the region remains uncertain, the company is holding off on an update on the negative financial effects until its fiscal Q3 2020 earnings update. China's contribution to total revenue has been increasing over the years, from just 12.3% in FY 2017 to 16.8% in H1 2020. What's more, the operating profit margin for China has also been on an uptrend, going from 35.6% in FY 2017 to 38.7% in H1 2020. These facts underscore the increasing importance of China in Nike's overall growth trajectory.

Brace for a short-term negative effect

Investors are now faced with a compelling scenario -- that of a strong, innovative company being hit by headwinds caused by what appears to be a temporary epidemic. I have no doubt that the virus outbreak will eventually end, as a global effort is underway to resolve the matter.

In the meantime, investors need to brace for a short-term financial effect on Nike's Q3 2020 earnings. This one-time hit will depress net income and create an attractive opportunity for investors to buy the stock at a reduced price. The company's track record of growth in top and bottom line, as well as its commitment to innovation and research, should reassure investors of its quality. Buying quality during times of short-term stress factors will result in great long-term performance for the astute investor.