Please ensure Javascript is enabled for purposes of website accessibility
Log In Help Join The Motley Fool
Free Article Join Over 1 Million Premium Members And Get More In-Depth Stock Guidance and Research
By Eric Volkman - Feb 13, 2020 at 8:28AM

This version of medical cannabis legalization would impose unique restrictions on its use, but it cleared its first legislative hurdle easily.

The state of Kentucky is one step closer to making marijuana legal, at least for certain medical purposes. A bill sanctioning the sale and consumption of medical cannabis passed the judiciary committee in the state's House of Representatives on Wednesday.

It did so with strong bipartisan support -- 17 of the committee's 18 members voted in favor of it. The bill will now advance to a full vote in the House. 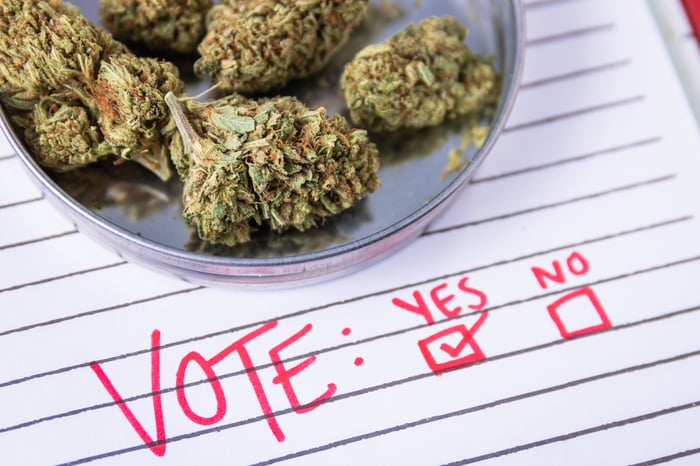 However, a similar bill sailed through the same committee last year, then failed to be given a full House vote. Moreover, while Republicans control both chambers of Kentucky's legislature, their 29 to 9 majority in the state Senate is overwhelming, and Republicans tend to be more resistant to cannabis legalization.

Finally, the bill under consideration is unusually restrictive compared to medical cannabis laws that have been passed elsewhere. For example, while it would allow doctors to prescribe cannabis flower, and dispensaries to provide it to patients, it would prohibit them from smoking cannabis -- the most common means of partaking of it. Also, counties would have the right to decide not to participate in the medical cannabis program.

At present, cannabis is still fully illegal in Kentucky. Cannabidiol (CBD) oil can be sold and consumed, but it must be prescribed for medical use by a doctor.

At this early stage, it's difficult to determine whether big cannabis companies will enter the market in Kentucky if medical cannabis is made legal there. Illinois, the only state bordering it that allows recreational marijuana, is home to several companies active in the retail cannabis space. Cresco Labs (CRLBF 1.09%) in particular has been quite active in its home market and is eager to expand its footprint.

Cresco hasn't yet indicated whether it aims to enter the Kentucky market. Cresco's stock price rose by 2% on Wednesday.