Please ensure Javascript is enabled for purposes of website accessibility
Log In Help Join The Motley Fool
Free Article Join Over 1 Million Premium Members And Get More In-Depth Stock Guidance and Research
By John Bromels - Feb 14, 2020 at 10:04AM

This big company has also been a top outperformer, but disappointing revenue calls that into question.

Massive companies in boring industries aren't supposed to be fast growers. But in recent years, trash behemoth Waste Management (WM 2.12%), the top trash hauler and landfill operator in North America, has defied that sentiment. As of the end of 2019, the company's share price had risen 122.1% in five years. It continued to rise in the first weeks of 2020.

But on Feb. 13, Waste Management released Q4 2019 earnings numbers that disappointed Wall Street. Shares slid 2% in morning trading. Is this just a temporary setback or should investors be concerned that the growth machine has run out of fuel? 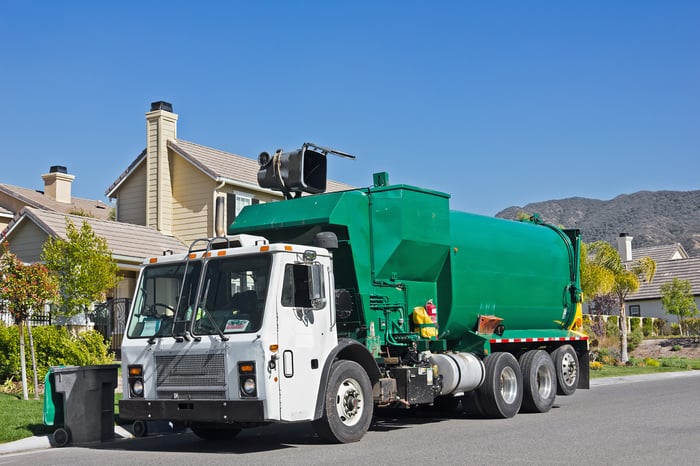 Perhaps the biggest surprise is that quarterly revenue was flat year over year (YOY). For the last five years, Waste Management has always posted clear YOY quarterly revenue growth. That was the first thing that rang the alarm bells for investors.

Net income was down on a YOY basis, but this included some significant one-time items including $57 million in asset impairments, $33 million in costs related to the company's big 2019 acquisition of rival Advanced Disposal, and another $10 million in costs for an enterprise resource planning system. In the prior-year quarter, the company notched a $55 million gain from asset divestitures. Adjusting for these items, earnings per share were up a respectable (though not outstanding) 5.3%.

But the company still showed its impressive ability to churn out ever-higher amounts of cold hard cash, generating $1 billion in a single quarter for the first time this century.

Why revenue was flat

That disappointing revenue number was due to a single business line (and longtime Waste Management investors can probably guess which one): recycling. Recycling has long been a thorn in the company's side ever since China stopped accepting U.S. recyclable plastic in 2018, which increased the costs of disposal across the industry.

Waste Management has been working to offset this sudden increase in costs, but it's been a tricky proposition. At this point, plastic recycling is an expected service, but customers couldn't absorb the massive cost increase all at once, so Waste Management has had to find a happy medium. Except, in the fourth quarter, the medium wasn't so happy due to a "sharp decline in market prices for recycled commodities."

Aside from recycling, revenue was up YOY from most of the company's core business operations: 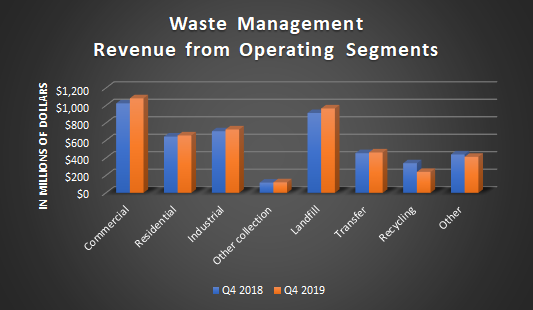 If recycling revenue had been flat, overall company revenue would have increased by 2.5% year over year.

In a press release, CEO Jim Fish highlighted the positives from the year:

In 2019, we continued our focus on optimizing our traditional solid waste business, developing our people and investing in technology to better serve our customers. Our strong results demonstrate that we are investing in the right areas. Our collection and disposal business operating EBITDA grew by 8.5% in 2019 and operating EBITDA margin expanded by 70 basis points. This strong operating EBITDA growth translated into an 8.5% increase in net cash provided by operations in 2019.

On the Q4 2019 earnings conference call, he indicated that the company would continue to adjust its recycling pricing, with the hope of achieving the same success it's had with its metropolitan solid waste (MSW) pricing model:

Together, the team achieved our best ever full-year landfill MSW pricing in 2019 as we exceeded 3% MSW yield in every quarter, with each quarter surpassing the previous one, culminating in Q4 MSW yield of 4.5%. We expect to continue to drive improved MSW pricing for the foreseeable future as our price increases keep pace with the increasing costs at our landfills. But we won't just focus on MSW pricing. We're pricing all our lines of business to ensure that we generate appropriate returns on invested capital, including our recycling and residential lines of business.

Free cash flow is projected to be between $2.15 billion and $2.25 billion ("exclusive of transaction and advisory costs incurred for the acquisition of Advanced Disposal"), up 4.3% at its midpoint from the $2.11 billion in cash flow the company generated in 2019. The company projects capital expenditures of $1.7 billion to $1.8 billion, roughly flat with 2019's $1.8 billion.

Waste Management's board of directors proposed a 6% increase in the annual dividend to $2.18 per share, which would be the company's 17th consecutive annual dividend increase. The company expects to restart its share repurchase program in the first quarter of 2020, under an existing $1.3 billion authorization by the board.

The big issue during the quarter -- lower recycling commodity prices -- has been an ongoing problem for the company. However, it doesn't seem to be impacting Waste Management's ability to generate boatloads of cash, or to crank out improving profits (on an adjusted basis, anyway). Since China stopped accepting U.S. recyclable plastic, Waste Management has been reasonably successful in making changes to minimize the damage, which had a much bigger bottom-line impact in past years. This quarter's hiccup is small by comparison and doesn't really affect the long-term thesis for the company.

That said, even factoring in the morning's slight drop in share price, Waste Management's stock looks pretty expensive right now, at over 30 times earnings. While long-term growth still seems likely for Waste Management, value investors may want to keep the stock on their watch lists as they wait for a more attractive entry point.